In a preprint technical paper published earlier this year, Facebook researchers propose Digit, a low-cost, compact, high-resolution tactile sensor geared toward the challenging task of in-hand robotic grasping. Digit is designed to be mountable on multi-fingered robot hands, and the coauthors claim it provides enhanced durability and a more repeatable manufacturing process compared with other sensors on the market.

Despite decades of research, general-purpose in-hand manipulation remains an unsolved challenge in robotics. One of the contributing factors is the difficulty in sensing contact forces, which is critical to controlling interactions within an environment because it provides a natural and direct way to measure forces. According to the researchers, Digit accomplishes this sensing with a small, modular form factor and assembly process that reduces costs — an individual sensor costs an estimated $15 when manufactured in a batch of 1,000 — and potentially supports large-scale manufacturing.

Digit, which measures 20 x 27 x 18 millimeters and weighs around 20 grams, has a plastic body with a three-piece enclosure that’s conducive to both 3D printing and injection molding. A camera and gel are mounted to the body using “press fit” connections so that any one component can be swapped out, and the housing is replaceable to allow for different lens focal lengths. Additionally, the elastomer materials under the surface of the sensor’s contact can be replaced with a screw, enabling task-specific elastomers to be swapped in — for example, materials with hardness and opaqueness tuned to required sensitivity and forces.

Above: The Digit sensor capturing the visual characteristics of various objects.

Under the hood, Digit packs in-house electronics that control camera characteristics, illumination, and video capture while measuring only slightly larger than a human fingertip (7 centimeters squared). Three RGB LEDs provide illumination over the elastomer gel surface, which was also custom-designed using a three-stage silicon-and-acrylic manufacture process that balances ruggedness and sensitivity. The researchers say that in tests, Digit’s gel transmitted 767 lux (a measure of illumination intensity) versus third-party gels’ 17 and 16 lux, respectively, even after 15 cycles in a machine designed to inflict abrasions.

During a separate experiment aimed at measuring Digit’s in-hand manipulation performance, the researchers tasked an Allegro robotic hand equipped with Digit sensors to hold and manipulate a glass marble between the thumb and middle finger and move the marble to certain locations. At the beginning of each trial, the marble was raised by a metallic stand mounted on a linear motor, and a Sawyer robotic arm executed a preprogrammed motion to pick up the marble. At this point, the Allegro hand — which was mounted to the Sawyer arm — had to learn to roll its fingers over the marble by modeling slipping and deforming dynamics under degrees of pressure.

To develop a dynamics model, the researchers collected data from 4,800 trials during which the fingers moved randomly over the marble for 10 seconds and Digit’s cameras recorded video. Afterward, they trained another model to detect key points in the marble representing factors of variation in the input data, which they used to create a planner system that moves the marble toward a given target position without dropping it or pressing too hard. 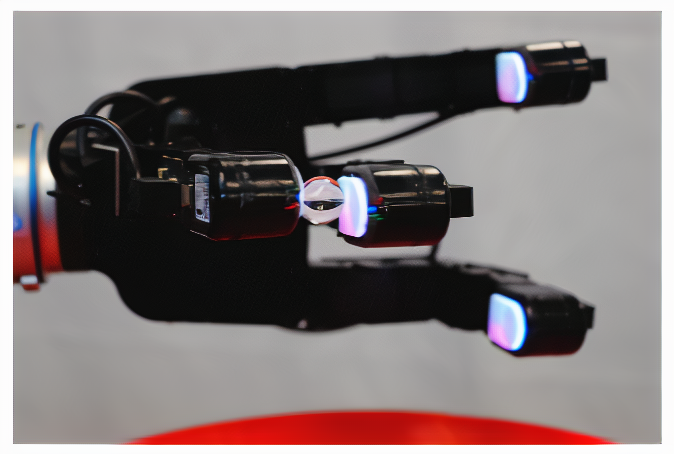 Above: Facebook’s Digit sensor integrated with a robotic hand.

The researchers report that in the course of 50 trials, the hand dropped the marble about 25% of the time. However, they attribute this to planning inaccuracies and noisy data as opposed to flaws in Digit’s design.

The manufacturing files for Digit’s plastics enclosure, gel, and electronics are on GitHub, as well as the firmware binary for programming and a Python interface. In future work, the research team intends to further miniaturize Digit’s form factor and design new sensors with curved, omnidirectional sensing fields.

Interestingly, Facebook’s Digit comes on the heels of two exploratory works in robotic grasping from MIT’s Computer Science and Artificial Intelligence Laboratory. One built on existing research that employs a cone-shaped origami-inspired structure designed to collapse in on objects, while the other gave a robotic gripper more nuanced, humanlike senses in the form of LEDs and two cameras.