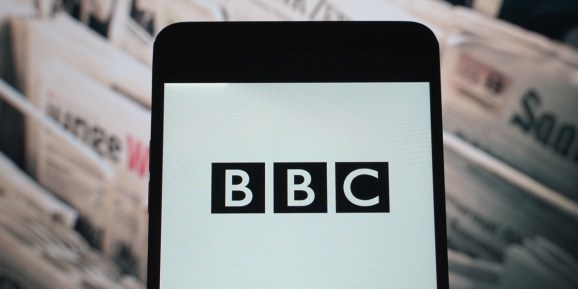 The logo of BBC is displayed on a smartphone.

The BBC has launched an early version of its previously announced voice assistant in partnership with Microsoft. Beeb, as the assistant is called, will initially be made available in the U.K. as part of Microsoft’s Windows Insider Program, where participants will contribute to improving the voice assistant ahead of a wider rollout.

The launch comes amid growing tensions around how technology companies are commercializing user data through voice assistants and other digital platforms. The BBC, as a public service broadcaster funded by license fees in the U.K., will still gather user data by requiring users to log in with their BBC account, but it may hold a trust advantage because its business isn’t built around targeted marketing in the same way as Google or Amazon are.

The BBC first announced its plans for Beeb last year, revealing that its intentions were less about launching dedicated hardware similar to Amazon’s Echo and more about building voice services into its own products, including its website and iPlayer TV streaming service. Fast forward to today, and we now have a first glimpse of what has been brewing behind the scenes: The BBC is leveraging Microsoft’s Azure AI infrastructure including its speech recognition services for the new Beeb app, building on myriad previous projects the two companies have worked on together, including an experimental voice-controlled iPlayer back in 2017.

Beeb Beta is available to download now in the U.K. for Windows 10 PCs and tablets, though only those on the Windows Insider Program will be able to access it. (Anyone can sign up to become a Windows Insider, however.)

Initially, Beeb will be able to play specific radio stations, podcasts, or programs from the BBC, with users having to say something like, “OK Beeb, play Radio 1.” Users will also be able to request a snapshot of the local weather and latest news headlines by saying, “OK Beeb, update me.”

Other commands include “OK Beeb, tell me a joke,” with responses penned by professional comedy writers from the BBC.

Although the BBC could in theory open up Beeb to third-party services in the future, for now it’s really all about optimizing for the BBC’s own digital services. “We’re still in the early stages of what services will be available on Beeb, but there’s no plans with third-party content at the moment,” a spokesperson told VentureBeat.

Clearly, Beeb has limited functionality compared to other voice assistants on the market, as users won’t be able to ask general questions from across the internet or command Beeb to turn up their thermostat or similar “smart home” functions. But Beeb isn’t really vying for the same market as Google Assistant or Alexa — it’s more about giving the BBC control of its own data and enabling it to experiment with new features and functionality without having a third party in charge of the go-ahead.

Most of the major voice assistant providers have faced significant controversy over their handling of user voice data, in particular around how human reviewers could listen to private conversations. A former Apple contractor who last year exposed Apple’s privacy lapses around Siri revealed his identity last month, criticizing the lack of action taken against Apple in the year since his revelations were made public.

According to the BBC, the voice assistant only listens when it hears the “OK Beeb” wakeword, though the company stressed that the voice assistant can be activated if it hears something similar to the wakeword — this is a problem that has plagued other voice assistants as well. The organization said that it won’t be making any audio recordings of what a user says to Beeb. However, it will retain text transcripts of things that people say, which will be used to improve the assistant in the future. Some of these “anonymized” transcripts may also be shared with Microsoft.

“We remove any data that can easily identify you when we store this text transcript, so we won’t know who said what, but we will know what’s been said,” the spokesperson said. “So unless you actually reveal your personal information — for example, by saying your name and address to Beeb so that it gets entered into the text transcript — we won’t know who you are when we review it.”

One of the reasons why the BBC will be reviewing text transcripts has to do with accents. Google Assistant and Alexa have difficulties with very strong regional accents, and the BBC is looking to set itself apart by catering specifically to the myriad accents that exist across the U.K.

“We know how frustrating it can be when the voice assistants currently available don’t understand you, which can happen a lot if you have a strong regional accent,” the spokesperson continued. “It’s important to us that Beeb works for everyone in the U.K., so we’ve been working hard to make sure that it can recognize these regional accents and accurately understand what’s being said, regardless of where in the U.K. you’re from. This is something we’ll be continuing to develop as we improve Beeb, and is one of the reasons we’ve launched Beeb early, so that we can improve its understanding of real people and accents.”

An upshot of this, however, is that the BBC may wish to capture voice recordings in the future so that it can make comparisons with the text transcripts and check for accuracy. “If we decide to do that, it will be on a voluntary, opt-in basis — we won’t record anyone without them explicitly telling us that they’re happy for us to do so,” the spokesperson added.

Curiously, Beeb will also be one of the first voice assistants to sport a male voice by default, though others on the market do have the option to switch to a male voice.

“We chose a male voice for this first version of Beeb because it felt different from the other popular voice assistants people use at the moment,” the BBC said. “Our ambition in the future is for you to be able to choose from a range of voices you’d like Beeb to have.”