Wireless drone charging solutions provider WiBotic today announced it has raised $5.7 million, which it will use to expand its product offerings and enhance customer support. CEO Ben Waters says the plan is to grow WiBotic’s sales team over the next few months as the company advances various internal hardware and software engineering efforts.

Drones — whether aerial, mobile, or marine — need power. Some operate nearly continuously day and night, pausing only to recharge. WiBotic supplies some of the technologies that enable this, from wireless chargers to power optimization chips for a growing number of autonomous robots. Its technology builds on more than eight years of research at the University of Washington, incorporating inductive and resonant systems in an approach called “adaptive matching” that constantly monitors antenna position and dynamically adjusts hardware and firmware parameters to maintain efficiency.

WiBotic’s kits consist of four components: a transmitter, an antenna coil, an onboard charger unit, and a receiver antenna coil. The transmitter uses any available power to generate a high-frequency wireless signal, which travels through a coaxial cable to the antenna coil, where it produces electrical and magnetic waves. When a drone comes within range, the transmitter recognizes its charger unit and receiver coil and automatically ramps up to deliver the right amount of energy — through air, water, or other non-conductive materials.

WiBotic’s wireless charging systems have attracted companies in warehousing, logistics, hospitality and service, security, energy, and defense. Regardless of sector, the systems can be placed throughout worksites to allow fleets of drones to land and charge quickly. They can be embedded into drone garages or hangars, and they’re resistant to dirt, water, and corrosive materials. On the power optimization side, they support fleet-wide battery status monitoring and smart charging routines, eliminating the need for human monitoring. 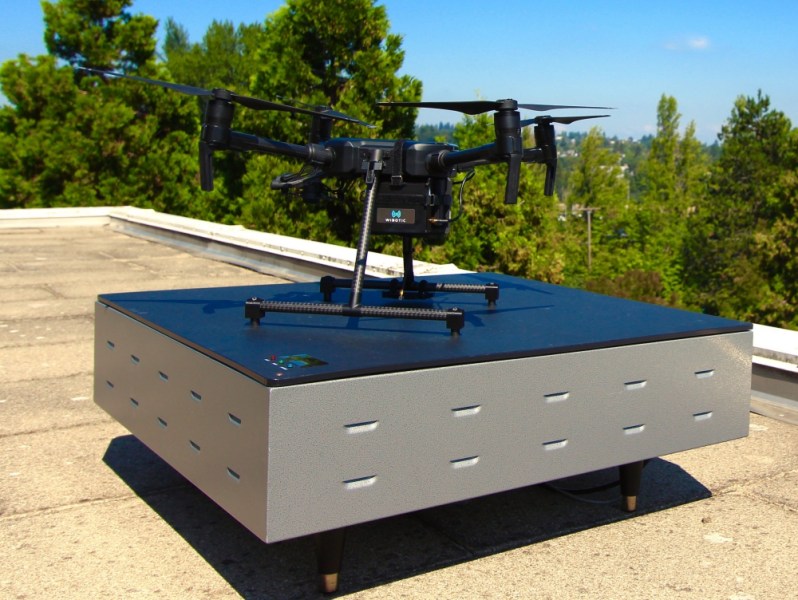 On the software side, a network API allows computers on the same network as transmitters to monitor charging and set desired parameters. For example, operators might integrate robot scheduling systems to ensure drones are charged at the highest available power level during the day but more slowly overnight to maximize the lifespan of individual drone’s batteries. As for the onboard API, it lets robots or drone controllers access the onboard charger directly to perform the same functions.

For marine drones, WiBotic provides chargers that allow robots to recharge by swimming into or near underwater transmitting stations. These have a flexible antenna range that reduces the potential for biofouling (harmful effects caused by the accumulation of microorganisms, plants, algae, and small animals on mechanical surfaces). And the wireless components can be potted to allow for full aquatic submersion.

All of WiBotic’s systems are designed to offer “many-to-many” operation — in other words, multiple drones can charge from the same transmitter at different times, or a fleet can move within a network of transmitters. In addition to complete systems, WiBotic sells piecemeal transmitters, onboard chargers, and antennas, as well as custom brackets and battery interfaces for drones from manufacturers like DJI.

This week’s series A round brings Seattle-based WiBotic’s total raised to over $7 million. Junson Capital, SV Tech Ventures, Rolling Bay Ventures, Aves Capital, the W Fund, WRF Capital, and others participated in the round, which saw Coolfire Solutions’ Mark Rogers join the board of directors.

WiBotic competes with a number of companies in the aftermarket wireless drone charging market, which BIS Research predicts will climb to over $249.3 million by 2024. There’s Skysense, which provides both wired and wireless systems for commercial drones, and GET, which develops a network of wireless charging hotspots for drones. And in academia, researchers at Central Queensland University recently investigated approaches to drone-to-drone wireless energy transfers.