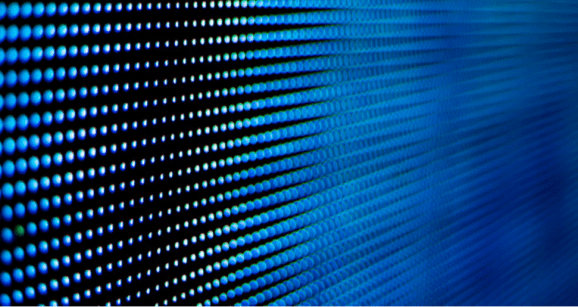 Electronic display screens have changed considerably over the past century. The emergence of LCDs and OLEDs ushered in a new age of screen technology. It led to significant improvements in image sharpness, color, contrast, and space utilization; yet, screens are still far from ideal color rendering and brightness.

However, groundbreaking advancements in quantum dots are enabling LCDs and OLEDs to break new barriers in image quality and screen efficiency. Quantum dots are nanocrystals that are about 60 million times smaller than a tennis ball. Their tiny size makes it possible for them to create almost every color in the spectrum. Introduced in 2013, quantum dot technology enhances the brightness and color fidelity of screens with minimal change to the manufacturing process. But recent innovations in quantum dots have made these enhancements very substantial. As a result, quantum dot technology is expected to be a standard feature of upcoming displays.

LCD and OLED displays were major improvements from the traditional CRT television sets that were sold throughout the 20th century. There are numerous reasons the market shifted to LCD and LED electronics since the early 2000s. These screens are far more efficient and much more compact than their predecessor, allowing for new design freedom. They have better sharpness because the pixel density is much higher. The screens are also a fraction of the thickness of the old CRT sets, which allows consumers to utilize their space more efficiently.

While developments in LCD and OLED display technology solved some problems, not all frustrations for consumers were addressed. Those screens aren’t the most efficient, and their RGB color gamut and brightness also leave a lot to be desired.

In some aspects, OLED displays offer advantages over LCD televisions (e.g. they are thinner and have better black levels). However, they are much more expensive (most standard 55- to 65-inch OLED television units cost at least $2,000); and suffer from poor brightness (OLED displays have a brightness of only 500 nits, which is about half that of a standard LCD screen). As a result, OLED screens have poor visibility in brightly lit rooms.

The color gamut and brightness issues plaguing standard LCDs and OLEDs stem from a lack of efficient color-converting phosphors that emit photons with a narrow spectrum, particularly in the green. The narrower the emission spectrum, the purer is the color (and the wider is the color gamut of the display); the more efficient the converter, the brighter is the screen.

With this concept in mind, developers such as Nanosys and Samsung introduced quantum dot enhancement films (QDEFs) as an augmenting component in niche segments of LCDs. The first generation of QDEFs were based on green-emitting cadmium selenide and indium phosphide quantum dots, with emission widths of about 25-30 nm and 35-40 nm, respectively. As a result, QD screens had a BT2020 color gamut coverage 40-50% larger than LCDs — adding millions of new colors.

However, innovations in quantum dot technology are making way for a new generation of green quantum dots, based on materials called perovskites that are poised to broadly reshape the landscape of LCD and OLED displays. Perovskite quantum dots are superior to the previous generations of dots: they have much narrower emission widths, emit photons at nearly 100% efficiency, and are easier to scale up (without compromising on quality). Perovskite-based QDEFs, like the QDot™ Sharp Green Film developed by Quantum Solutions, one of the leading innovators in the field of quantum dot technology, emit green photons with remarkably narrow spectral line widths (< 20-23 nm). Such pure green QDEFs translate into bright screens covering >90% of the BT2020 color gamut; and displays with the most accurate, true-to-life colors.

The close-to-perfect photon emission efficiency of perovskite quantum dots enables displays that sustain high brightness levels (1000-2000 nits) while operating more efficiently. This leads to comfortable viewing even in the most illuminated environments. QDEFs appreciably upgrade the user experience of screens at affordable price points. Consumers have taken notice. Soon, they will be a prominent feature in most LCDs and OLEDs.

The future of quantum dot technology in displays is bright.