The worsening COVID-19 health crisis in much of the U.S. seems likely to hasten the adoption of self-guided robots and drones for goods transportation. They require disinfection, which companies like KiwiBot, Starship Technologies, and Postmates are conducting manually with sanitation teams. But in some cases, delivery rovers like Refraction’s could minimize the risk of spreading disease.

Refraction says from today customers within a three-mile radius of Produce Station can have orders delivered by its REV-1 robot. After customers order through a dedicated website, Refraction’s employees load the vehicles at the store, and recipients receive text message updates, along with a code to open the robot’s storage compartment when it arrives. 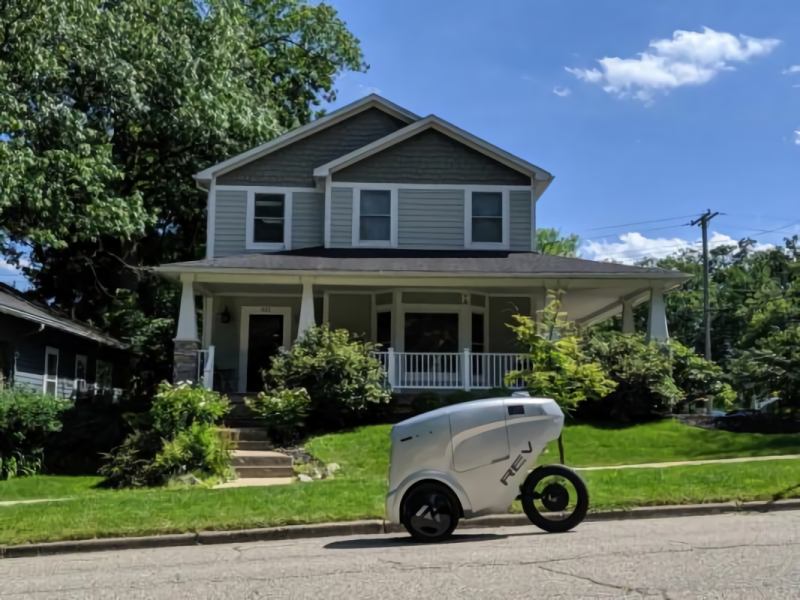 According to Refraction, new protocols and adjustments to operations have been implemented in accordance with current health guidelines. Robots are now disinfected between each delivery, for instance, with cleaning staff remaining physically distant from each other. The robots also contain microbe-killing UV lights and are being controlled and operated by employees at home instead of from Refraction’s office in downtown Ann Arbor.

REV-1, which is approximately the size of an electric bicycle and legally categorized as an ebike, weighs approximately 100 pounds and stands roughly 4 feet tall, including its three wheels. It travels an average 10 to 15 miles per hour with a very short stopping distance, and the compartment holds about six bags of groceries.

REV-1’s perception system comprises 12 cameras, in addition to redundant radar and ultrasound sensors — a package the company claims costs a fraction of the lidar sensors used in rival rovers. The robot can navigate in inclement weather, including rain and snow, and it’s not dependent on high-definition maps for navigation.

Prior to the Produce Station partnership, REV-1 had been delivering exclusively from Ann Arbor restaurants — including Miss Kim and Tio’s Mexican Cafe — during lunchtime as part of a three-month pilot. The company charges the restaurant a flat $7.50, and Refraction’s over 500 customers pay a portion of that fee if the business chooses. (Tips go directly to Refraction’s partners.) As of May 2020, Refraction had eight robots running in Ann Arbor, and it expects to have 20 within the next few weeks.

Launched in July 2019, Refraction AI was cofounded by Matt Johnson-Roberson and Ram Vasudevan, both professors at the University of Michigan. The startup recently secured $5 million in funding from investors that include eLab Ventures and Trucks Venture Capital, bringing its total raised to $6.5 million.