Openpath, a company that builds keyless and contactless building access systems, has raised $36 million in a series C round led by Greycroft. Openpath had previously raised around $27 million, and the company said its latest cash injection will be used to accelerate product engineering, hardware, and software development and “support its client base across new verticals.”

Demand for contactless technologies has surged during the COVID-19 crisis, accelerating digital payments, socially distanced deliveries, and other technologies that help people interact safely with the physical world.

Founded in 2016, Culver City, California-based Openpath offers a range of hardware and software products building owners can leverage to permit entry without physical keys. The company provides the smart readers and hubs required to make buildings compatible with keyless access systems, as well as apps for phones and smartwatches so approved individuals can gain entry with minimal effort. Openpath also offers encrypted keycards and fobs for those who prefer a dedicated key-like device. 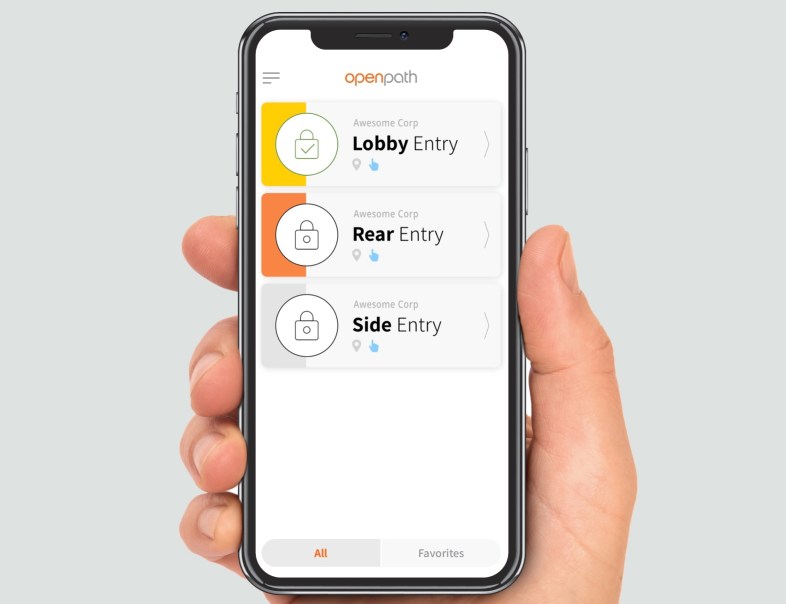 Above: Openpath on mobile

The company recently launched a new “wave to unlock” entry solution in response to COVID-19 sanitation concerns. Users are still required to carry their mobile phone, which connects automatically to a wall-mounted reader via Bluetooth and waits for a wave or the touch of an elbow.

This may present a slight tradeoff between security and convenience, since it’s technically possible for someone walking by to gain entrance based on a user’s proximity. But building owners can configure settings to require a closer Bluetooth range or deactivate the feature for doors where security is of greater importance.

Above: Openpath in action

According to Openpath president and cofounder James Segil, the company launched its “wave to unlock” feature in a single weekend — with minimal effort. “Our clients wanted to have a touchless experience to unlock the door,” Segil told VentureBeat. “We tested it and pushed it out, and what’s great about having a cloud-based IoT platform is that now more than 10,000 doors around the country are instantly upgraded with this new feature — without rolling out trucks or sending out service techs.”

As with many other companies that work in the contactless technology sphere, Openpath said it has enjoyed a sizable uptick in interest during the pandemic.

“We had the best month of sales in our history in June, and July is looking even better,” Segil added. “We’ve seen inbound leads and pipeline grow, and our resellers are sending out more proposals than ever. We can definitely see a spike in web traffic as well for COVID-19-related searches for our technology.”

Openpath currently operates in the U.S. and Canada, though it has just begun rolling its technology out in the U.K. And while offices represent a large part of its customer base, its technology extends to a range of locations, including gyms, schools, residential buildings, industrial sites, retail outlets, and parking lots.