Chili Piper today announced it has raised $18 million to grow its sales platform for booking meetings and phone calls. With the fresh capital, the startup plans to invest in product capabilities and expand its sales and marketing efforts worldwide.

Calendaring is a common point of frustration among salespeople and potential customers. The majority of prospects prefer to read emails between 5 a.m. and 6 a.m., according to a 2012 report from Boomerang (formerly Baydin), but some insist on virtual meetings. In fact, a recent HubSpot survey found that salespeople spend 12% of their day scheduling calls.

Chili Piper seeks to alleviate this burden through inbound scheduling automation. Its rules-based concierge tool integrates with web forms and routes prospects to the right person based on territory, company size, account ownership, and other variables. (Rules can be configured to account for things like vacations, off-hours, unavailable reps, and more.) When a prospect submits a form, the tool displays the correct rep’s calendar or (calendars) and lets the prospect book a meeting with one click. The concierge can be launched from content forms and embedded on any web page or application, and it’s available as a Chrome extension to facilitate bookings from Gmail, Google Calendar, Salesforce, Salesloft, Outreach, and more.

Using Chili Piper, reps can share suggested meeting times or provide booking links over email to allow prospects to schedule meetings in their calendars. Both reps and prospects get email and text reminders about upcoming meetings, and reps can create rest time before or after meetings to prevent back-to-back appointment scheduling. They can also book time in their calendars exclusively for appointment scheduling, onboarding, and check-ins, and Chili Piper gives them notice to prevent prospects scheduling meetings too soon or too far in advance. 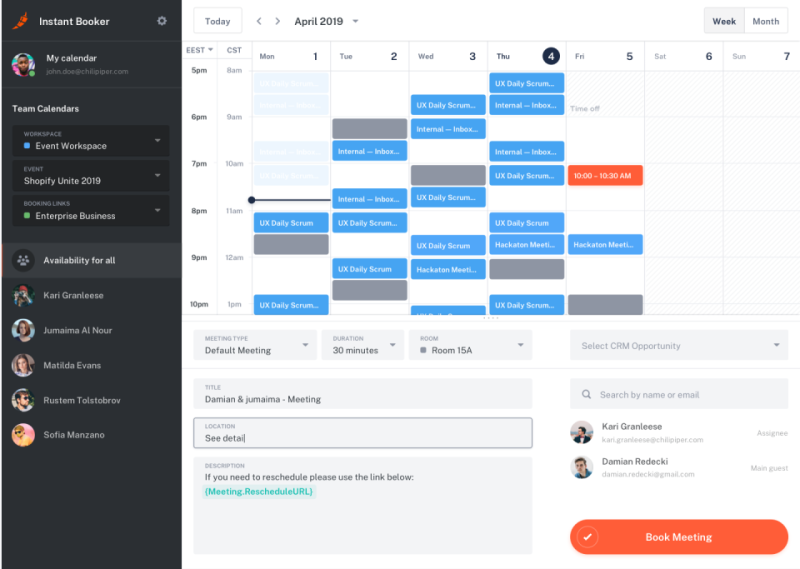 Chili Piper works with enrichment vendors like Clearbit and Zoominfo to capture data on-site, and its inbound scheduling automation integrates with Twilio, Zoom, GoToMeeting, and WebEx to connect calls to the right rep. The platform can optionally create contacts and update Salesforce fields as customers and reps book meetings from web forms, detecting when a new prospect isn’t already in Salesforce. And it lets reps track stages of meetings, including bookings, meetings held, no-shows, reschedules, and cancellations to build reports.

Chili Piper also offers a complimentary email collaboration suite that provides account-wide message search tools. It ties in with Gmail and allows managers to assign team members tasks by highlighting any word or phrase in a message body, with a draft-sharing feature that enables reps to work together to craft emails to potential customers.

Chili Piper counts several Fortune 500 companies among its customers, including Intuit and Hewlett Packard, and startups like Zenefits and Monday.com. According to Chili Piper, which now has employees in 40 cities across 15 countries, “thousands” of sales reps use its platform daily.