The U.S. freelance economy is booming, according to a recent Upwork report, with more than a third of the country’s workforce carrying out some form of freelance work in the past 12 months. This reportedly created $1.2 trillion in economic value — up 22% on the previous year.

But the shift has also created a lot of administrative work — from business incorporation to accounts, expenses, and taxes. Today, a startup is launching out of stealth with an impressive roster of investors to serve as an all-in-one back office for “businesses of one.”

Founded in 2018 as Hyke, the San Francisco-based company later changed its name to Collective and brought on Hooman Radfar as cofounder and CEO. Radfar previously launched a website audience tracking platform called AddThis that was acquired by Oracle in 2016 for a reported $175 million, and he subsequently joined startup lab and investment company Expa, which was set up by Uber cofounder Garrett Camp.

To help fund the platform’s beta and prepare it for a public launch, Collective managed to raise $8.65 million in funding from backers like General Catalyst, QED Investors, Google’s AI-focused fund Gradient Ventures, and Expa. The round also included a host of notable individual investors, including Garrett Camp.

The platform’s greatest asset is arguably its instant access to professional tax and business advisers. Collective offers users a quarterly review of their accounts and books, providing feedback on ways to adjust salaries and “optimize” deductions and expenses. Members can also access real-time messaging to contact their designated bookkeeper or advisor with any specific questions. 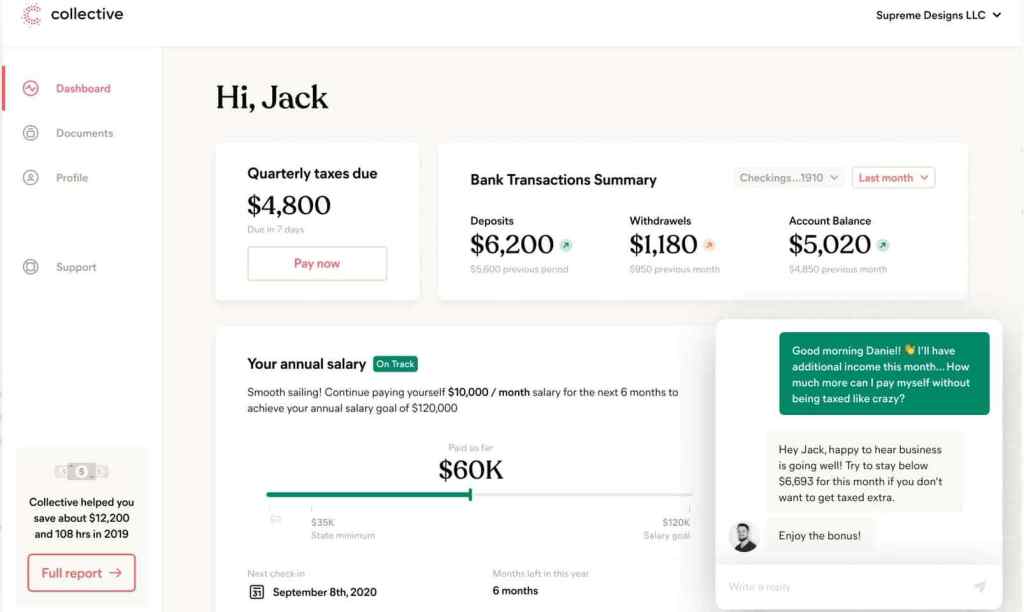 All of this costs $249 per month (though it is being offered for $199 for a limited period), meaning Collective isn’t aimed at those doing a little sporadic freelancing work in their spare time. The fee includes company formation support and access to QuickBooks Online, Gusto, accounting and tax filing guidance, and state compliance, as well as general guidance when required.

Collective claims that during its beta phase in 2019 it saved members earning $80,000 an average of $16,800, which suggests the $3,000 annual Collective fee could pay for itself pretty quickly.

The company also said it’s piloting a full bookkeeping service for an extra $99 to $199 per month. This is for those who want to completely hand off their accounts to someone else.

“Some members prefer to do their own accounting and just need our help to set up and advise on bookkeeping, but we are finding that many members prefer that we handle the books, as well,” Radfar told VentureBeat.

Gradient Ventures’ involvement in Collective is noteworthy, given that the Google-backed VC fund focuses entirely on AI startups. According to Radfar, Collective will use machine learning and AI technologies to “help inform the automation of bookkeeping and accounting.” More specifically, he indicated that Collective can automatically categorize expenses based on their type, which can in turn help “fuel” automatic tax filing. “If you have clean books, it’s much easier to automate taxes,” Radfar said.

While Collective is poised to capitalize on the freelance trend by acting as a virtual back office, a number of other platforms are serving freelancers on the other side of the fence — by helping them find work.

Given the huge number of recent job losses and concerns about hiring due to market uncertainties, freelance marketplaces are flourishing. Israeli company Fiverr’s shares have surged sixfold during the pandemic, with its user base and revenue jumping significantly over the past six months. Buoyed by this growth, Fiverr this month launched a new subscription-based platform for businesses. Santa Clara-based Upwork has also seen its shares rise by more than 300% during the pandemic.