Venture capital investments slowed in the third quarter amidst pandemic-induced uncertainty, but angel investors stepped up with a greater share of investments. Overall, the startup ecosystem has shown resilience in the face of COVID-19 and other turmoil this year, according to the PitchBook-NVCA Venture Monitor Report.

As with much of the U.S. economy, patterns of investment show winners and losers, according to the report, which is created by the National Venture Capital Association and data firm PitchBook.

One of the negative outcomes is that first-time fundraisers fell to a record 10-year low of 5.5% of all deal value and 23.7% of the total deal count. In the third quarter of 2019, first-time financings were 27.3% of the total. That means it’s harder to convince people via Zoom calls that your brand-new startup and untested deals are worth an investment.

Founders from diverse backgrounds and those between the coasts have also faced additional challenges. Female-founded startups in Q3 — and in 2020 overall — are down. And there was lower investment outside the traditional VC hubs of California, New York, and Massachusetts.

Female founders have participated in 467 deals with a value of $1.67 billion so far this year, compared to 714 deals and $2.67 billion for all of 2019. The low number of deals for female founders is particularly discouraging because startups are often a pipeline that feeds women and individuals from diverse backgrounds into the upper ranks of big companies, where their representation remains weak.

Most VCs are now making investments remotely, and the overall slowdown from the second to the third quarter isn’t alarming, according to the report. The strength of Q3 was largely due to late-stage investments, and the report said 662 late-stage deals closed in the quarter, with $26.6 billion raised.

This means that parts of the startup ecosystem are responding admirably to the grave challenges currently facing the U.S. economy, the report said. Startups and entrepreneurs are moving aggressively to address major challenges such as climate change, health care, COVID-19, and more. Sectors like gaming are exploding, while other spaces are being reimagined, the report said.

The report predicts significant long-term changes in consumer and business behavior and the emergence of new, large firms from this turbulent time.

While some sectors have struggled during the pandemic, the adoption of many new technologies accelerated and underpinned investment in other spaces. Pharma and biotech startups have, unsurprisingly, fared well, but COVID-19 has also accelerated the adoption of innovations in fintech, education, and telemedicine. The increased usage of remote and other technologies could lead to permanent new models of working, learning, teaching, and health care. 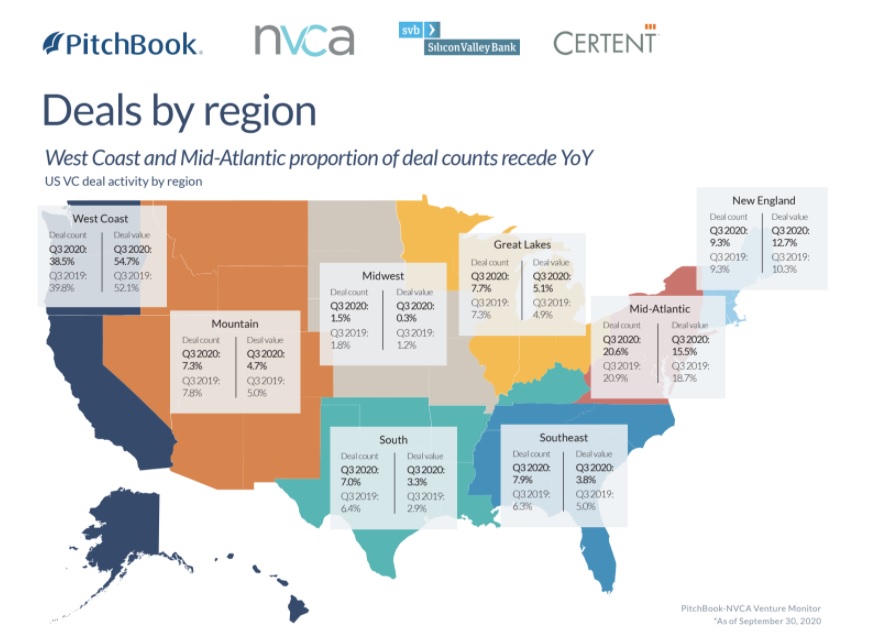 Above: The regions between the costs saw lower investment in Q3.

Life sciences — a sector that could help solve many current challenges — had a very busy and productive quarter. Investment trends for pharma and biotech have been strong for the last several years, but the COVID-19 pandemic has significantly increased investment in these sectors, especially for companies focused on the discovery, development, and production of vaccines, antivirals, and antibacterial products, areas that had been underfunded for many years. This surge in investment over the last two quarters could result in a five- to 10-year boost for the industry, the report said.

The combination of low interest rates, healthy public markets, and more money flowing into financial markets has given investors confidence that high-growth companies will be well-valued in the public markets, creating a positive trickle-down effect for startups. The result has been a strong initial public offering (IPO) window for startups across many sectors, including biotech, pharma, and various types of tech companies. Companies that went public included Snowflake, Palantir, Asana, and Unity, pushing exit values to $103.9 billion in Q3, with 13 IPOs in the quarter.

But uncertainties still permeate the ecosystem. The pandemic looms large as we face a second wave and its possible repercussions. A return to strict lockdown measures would likely drive the economy deeper into recession, with follow-on effects for public markets. Further declines in economic activity and a drop in valuations would have negative consequences for both VCs and startups. The biggest question mark on the horizon is the upcoming U.S. presidential election, which has the potential to create major disruptions across the ecosystem, the report said.