Mozilla today launched Firefox 83 for Windows, Mac, and Linux. Firefox 83 includes an HTTPS-Only Mode, performance improvements, and a handful of new developer features. You can download Firefox 83 for desktop now from Firefox.com, and all existing users should be able to upgrade to it automatically.

According to Mozilla, Firefox has about 225 million active users, making it a major platform for web developers to consider. Still, Mozilla recently went through layoffs and is now rightly worried about becoming “collateral damage” in Google’s U.S. antitrust case. The company has been doubling down on privacy and security this year, betting it will be able to win back businesses, developers, and users by protecting their data.

HTTPS is a more secure version of the HTTP internet protocol used to connect users to websites. Secure connections are a necessary measure to decrease content injection (which can result in eavesdropping, man-in-the-middle attacks, and other data modification). Data like passwords, credit card numbers, and other sensitive information is kept secure from third parties. Additionally, users can be more confident they are communicating with the correct website. 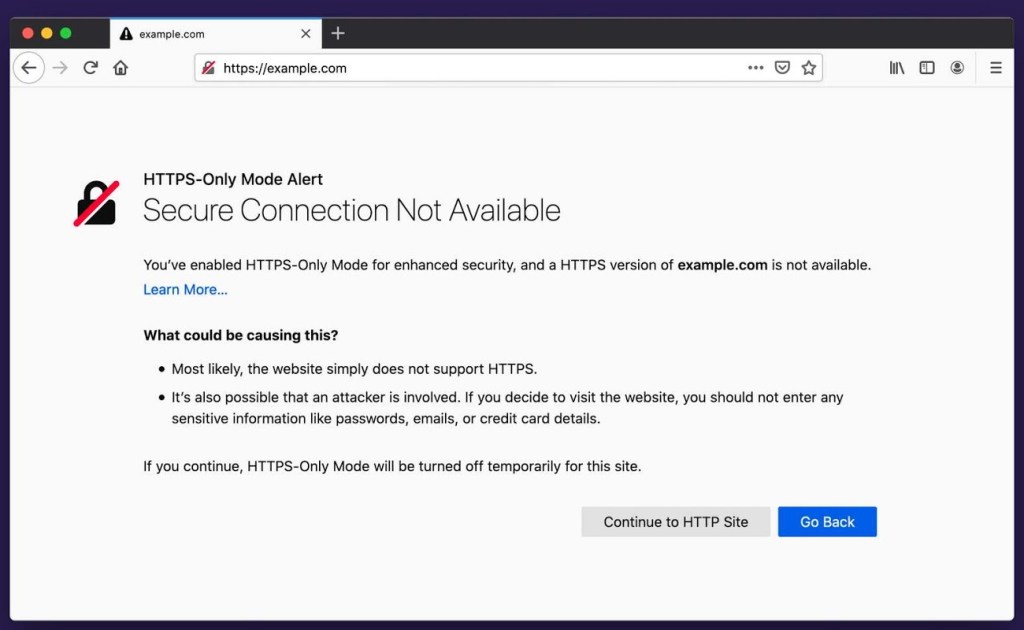 While the majority of websites already support HTTPS, many often fall back to using the insecure and outdated HTTP protocol. Additionally, the web contains millions of legacy HTTP links that point to insecure versions of websites.

Mozilla is trying to push Firefox users to always use HTTPS. The HTTPS-Only Mode ensures that Firefox doesn’t make any insecure connections without your permission. Whether you click on an HTTP link or manually enter an HTTP address, Firefox in this mode will use HTTPS instead:

Firefox could soon enable HTTPS-Only Mode by default. The main obstacle preventing Mozilla from doing so now is that some HTTPS websites still serve resources such as images or videos over HTTP. As a result, they may malfunction or not look right in this mode (you can temporarily disable HTTPS-Only Mode for a given site by clicking the lock icon in the address bar).

Firefox 83 also brings performance improvements (improved page load performance by up to 15%, page responsiveness by up to 12%, and reduced memory usage by up to 8%). Then there are the developer features, including Conical CSS gradients, overflow debugging in the Developer Tools’ HTML pane, WebRender across more platforms (Windows 7, Windows 8, and macOS 10.12 to 10.15), and pinch to zoom on desktop (Windows laptop touchscreens, Windows laptop touchpads, and macOS laptop touchpads). If you’re a web developer, check out the details here: Firefox 83 for developers.

For the full rundown, here’s the Firefox 83 for desktop changelog: