Google today announced the launch of Tree Canopy Lab for Los Angeles, a tool that combines AI and aerial imagery to help cities see their current tree canopy coverage and plan future tree-planting projects. Google says that Tree Canopy Lab, which is a part of the company’s Environmental Insights Explorer platform, could make it easier for cities to measure, plan, and reduce carbon emissions and pollution.

Extreme temperatures are becoming more common in cities, where concrete and infrastructure create heat islands, areas leading to poor air quality, dehydration, and other public health concerns. (Heat islands disproportionately affect minority communities, with one study showing that Blacks, Latinos, and Asians were 52%, 32%, and 21% more likely than whites to live in microclimates that can get an extra 5 to 10 degrees warmer during heat waves, respectively.) Trees have been pegged as one solution to both lower street-level temperatures and improve quality of life, but many cities lack the budget and resources to locate every tree in town while identifying where tree-planting efforts are most needed.

Tree Canopy Lab aims to address some of the blocks by analyzing satellite images collected from planes during the spring, summer, and fall seasons. Pairing these with the data analysis capabilities of Google AI and Google Earth Engine, the tool pinpoints all trees in a city and measures their density. The imagery used for Tree Canopy Lab’s calculations includes color photos that closely represent how a city might be seen from the sky. To extract even more information about a city’s canopy cover, near-infrared photos reveal colors and details that human eyes can’t see, comparing images from different angles to create a height map. 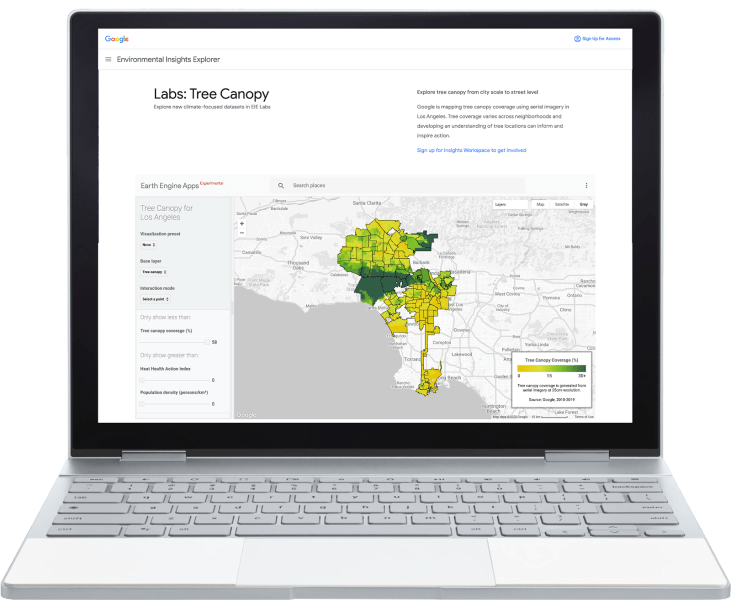 A specialized tree-detection algorithm within Tree Canopy Lab automatically scans the satellite images, detects the presence of trees, and produces a map that shows the density of tree cover. Using the tool, cities don’t have to rely on expensive and time-intensive manual tree studies involving block-by-block surveys, outdated records, or incomplete studies that only count trees in public spaces, Google asserts.

Tree Canopy Lab has already revealed that more than 50% of Los Angeles residents live in areas that have less than 10% tree canopy coverage and 44% that experience extreme heat risk, according to Google. The company also noted a correlation between the parts of Los Angeles with the lowest heat risk — which also have the lowest population density — and the highest overall tree canopy coverage.

Google believes that Tree Canopy Lab will be instrumental in helping Los Angeles achieve its goal of planting and maintaining 90,000 trees by 2021 and continuing to plant trees at a rate of 20,000 per year across over 503 square miles. In the coming year, Google says it plans to make the tool’s insights available in “hundreds” of more locations to promote progress worldwide.

Beyond Google, AI and machine learning practitioners are increasingly applying AI to help combat the effects of climate change. At a Climate Change AI workshop held at the NeurIPS conference last year, data scientists discussed the possibility of making AI a zero-carbon industry. There’s also the work of WattTime, a nonprofit organization that reduces a household’s carbon footprint by automating when electric vehicles, thermostats, and appliances are active based on when renewable energy is available. Other researchers have proposed practical models for electric systems and smart cities, as well as long-term projects with uncertain impact, like CO2 sequestration or a planetary control system.