Twitch has been around for a while now, and it is certainly one of the leading game streaming platforms around the world. Of course, along with prestige like this comes massive opportunities for promoting gaming content and monetizing your live streams.

If becoming a profitable Twitch live streamer isn’t your main goal, there is still a huge amount of potential for generating interest around your product, business, or brand.

So, what does it take to make your Twitch live stream successful? Of course, viewers and likes for your channel are really important, but we think that the real factor here is your Twitch followers.

Unfortunately, most companies out there that are selling their clients Twitch followers are looking to make a quick profit from naive customers who don’t really know what they’re doing. The good news is that there are quite a few things you can do to gain traction for your Twitch live streams, and get more Twitch followers checking out your content in general, without compromising your channel’s reputation and credibility.

Why do people buy Twitch followers?

Of course, the first step to understanding why buying Twitch followers is so popular is learning why the people buying them want to do so in the first place. If you have ever considered how many people are actually using Twitch right now, it’s a lot. It’s definitely enough to make it challenging to grow a Twitch channel on your own, because you have so much content out there to compete with that it’s nearly impossible to do everything manually.

When you have a lot of existing followers on your Twitch channel, your content will perform better against Twitch’s algorithm, which means that you will get more organic reach without having to do anything on your end. A lot of people think they can purchase Twitch followers to accelerate this process, but it’s actually harder than you think.

The bottom line when thinking about buying Twitch followers is if it really is as simple and straightforward as companies lead you to believe, then why isn’t everyone doing it? This is because the majority of companies out there that sell Twitch followers are only focused on making a profit of their own.

The reality is that you need so much more than this to do well on Twitch. Twitch is always on the lookout for fake engagement, so if you decide to take this risk for your channel, you could end up being suspended or banned.

What happens when you buy Twitch followers?

Twitch isn’t the most popular game streaming platform on the Internet for nothing. They know a thing or two about how to detect when their users are purchasing fake followers for their channels. They have put a lot of time and effort into developing a successful gaming platform for their users, and they will do everything they can to maintain its integrity.

At the end of the day, people want to be able to trust the streaming platform that they are on. This means that Twitch risks gaining a bad reputation from your fake Twitch followers as well.

How to buy real Twitch followers 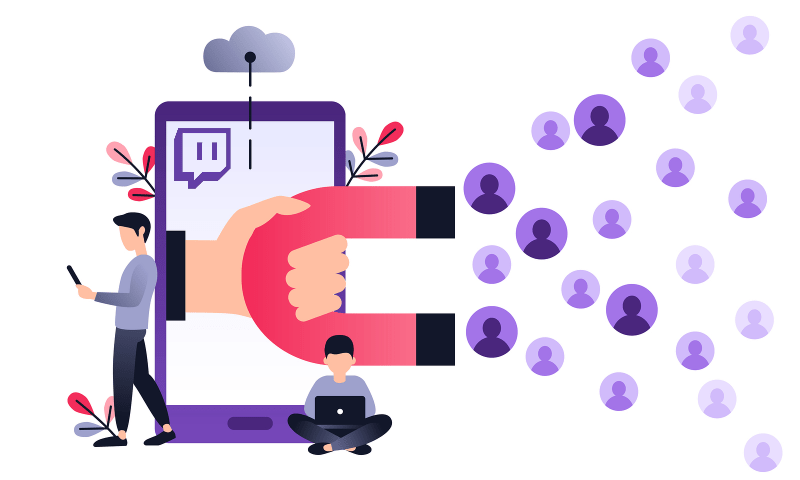 When on the lookout for a legit company, one thing that you want to avoid is any service that claims to offer a Twitch bot. Twitch automation like this risks your account being flagged by Twitch, and you will lose its privileges.

Avoid fake followers, and use SidesMedia instead.

SidesMedia is able to offer their clients real Twitch followers for their accounts, which the majority of other services can’t do.

SidesMedia provides its clients with Twitch followers for your live streams that are real, and are going to bring a lot of value to your content.

Companies like SidesMedia care about the individual client, which means that they’re not only going to help your Twitch channel grow, but they are also going to greatly increase your chances of being ranked by Twitch in searches.

SidesMedia can amplify your real Twitch followers, while keeping your account completely safe in the process. Of course, it’s critical that their Twitch followers are real, which means that they bring real value to your Twitch channel.

With a company like SidesMedia, there’s no need to worry about your Twitch followers being fake, because with SidesMedia you get the real deal.

Why is SidesMedia different?

When you work with SidesMedia, you can choose to buy real Twitch followers, and you get to choose from as little as 2,000, and as many as 100,000.

Not only does SidesMedia offer its clients the opportunity to buy real Twitch followers, but it also offers around-the-clock customer support, and will drip-feed your Twitch followers, keeping your account safe.

Of course, purchasing your Twitch followers that are fake is a cheaper option, but using a company like SidesMedia is going to get you seen by more of the right people, and build your social proof in general.

Let’s take a look at some other tips to incorporate into your Twitch growth strategy, to complement SidesMedia.

One of the most important things to help you gain Twitch followers is to provide your viewers with valuable and consistent Twitch content that they are going to want to interact with time and again.

Additionally, when you post high-quality Twitch content, you can get more viewers, chats, and interactions in general.

While it’s important to be able to grow a loyal following around your Twitch content, you’ve got to think beyond Twitch as well.

When you have an established presence on other social networks as well, including Twitter, Facebook, and Instagram, you can use your reach to drive traffic to your Twitch channel, and promote your live streams through other outlets on the Internet.

For example, we recommend that you create a Facebook fan page to generate interest and drive traffic to your Twitch channel.

No matter what your approach is, you can easily gain more Twitch followers through cross-promotion.

Just like any other popular social media platform out there, there are always going to be topics, trends, and challenges on Twitch that go viral when it comes to viewership and success.

This means that if you want to stay relevant and gain Twitch followers for your channel, you need to pay close attention to trending strategies, which content is performing the best, and keep yourself involved in any trends that you think will generate interest in your content.

Whatever game you play the most, make sure that you know as much about it as possible, so that you can keep up with what’s happening, and stay updated with any new features.

So, you probably have worked out by now that it’s not enough just to buy Twitch followers and expect to get the results that you’re looking for. Of course, everyone wants an easy way to grow their Twitch following but purchasing Twitch followers that aren’t real can ultimately do more harm to your channel than good. It even runs the risk of getting you suspended or banned.

An organic service like SidesMedia is going to cost you a little bit more, but we promise that the return on investment is going to make it well worth it. Don’t waste your time with cheap Twitch followers that don’t bring any value to your live streams, and as well as buying real Twitch followers, use the tips we have discussed above to ensure your success on Twitch. Good luck!

The product recommendations in this article are made solely by the sponsor and are not recommendations made by VentureBeat. Sponsored articles are content produced by a company that is either paying for the post or has a business relationship with VentureBeat, and they’re always clearly marked. Content produced by our editorial team is never influenced by advertisers or sponsors in any way. For more information, contact sales@venturebeat.com