CodeSandbox, a Dutch startup that enables developers to create a web app development sandbox in the browser, has officially launched a collaborative platform that allows teams to collaborate on code in the cloud.

A sandbox is a siloed testing environment that allows developers to run and execute programs without impacting the live application — perfect for prototyping. Up until now, CodeSandbox was mainly focused on individual users, with developers often using CodeSandbox in their own time and then attempting to use it with team members at work. But until now, the product wasn’t designed with collaboration in mind.

Team Pro, as the new product is called, is a no-code tool designed for entire product teams, from designers and managers to quality assurance (QA) teams and beyond. Projects are presented in a user-friendly interface for anyone who wants to make or accept changes to a web application, bypassing alternative processes that may involve passing notes and suggestions to developers to implement the changes, passing them back for comment, and repeating it all again.

Moreover, Team Pro exists entirely in the browser, which is ideal for distributed teams that aren’t all working in the same building on the same network.

A key selling point of CodeSandbox is that it is cloud native — the company hasn’t just transported a local development environment and stuck it on the cloud. This “web-first” approach means CodeSandbox is “faster, more collaborative, and easier to use,” CEO Ives van Hoorne said in a press release announcing the launch.

The fact that everyone in a product team can use CodeSandbox means developers can comment on each other’s code, designers can pitch in with feedback on the UI, and marketers can review the copy. 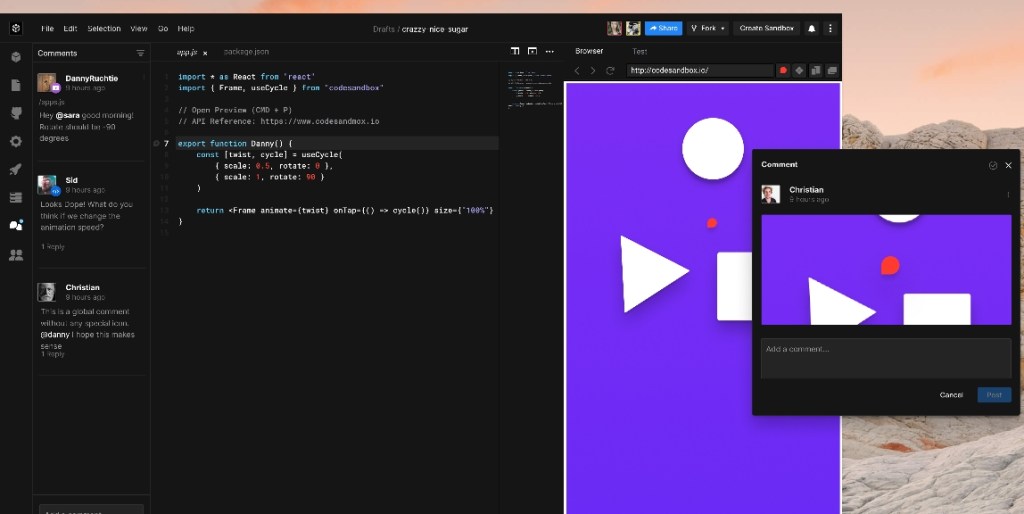 Above: Collaborative commenting in CodeSandbox

From the get-go, CodeSandbox has been vocal about its plans to support teams. Before Team Pro, the platform did actually offer a workspace feature so its customers could use CodeSandbox in groups — but this was intended only for public sandboxes, which effectively meant open source software. Team Pro, which has been in development for at least a year — including its beta launch back in October — ushers in a suite of new features. This includes support for custom registries that lets teams use their own component libraries and design systems and expansive commenting functionality so collaborators can post comments on specific lines of code, or on the broader sandbox. Moreover, Team Pro ships with various permissions for private sandboxes, allowing teams to put different restrictions in place depending on their role, for example.

A growing number of development tools are transitioning to the browser, with GitHub last year rolling out Codespaces to enable browser-based coding and Figma building a big fanbase for its browser-based UI design and prototyping product.

There are some clear synergies between Figma and CodeSandbox in terms of how they enable app prototyping in the browser. But they are ultimately different products, with Figma aimed more at the designer community. In fact, Figma cofounder and CEO Dylan Field is an investor in CodeSandbox.

Founded out of Amsterdam in 2017, CodeSandbox has raised around $15 million in funding, including a $12.7 million series A round just a few months ago from Kleiner Perkins and other investors. In its short life so far, the company has amassed some 2.5 million monthly users, including developers from organizations such as Atlassian, Shopify, and Stripe.

Team Pro is available now, priced at $24 per editor/workspace each month when billed annually, or $30 billed monthly.