Customer data analytics company Blueshift today announced it has closed a $30 million series C round, bringing its total raised to $65 million. The company plans to put the funds toward expanding its workforce while further developing its marketing platform.

A recent report from Forrester Research found that highly personalized, omnichannel marketing campaigns have the potential to generate 4 times more revenue and 18 times greater profits than static campaigns. Another survey pegs the average engagement rate for omnichannel at 19% compared with 5.4% for single-channel efforts. 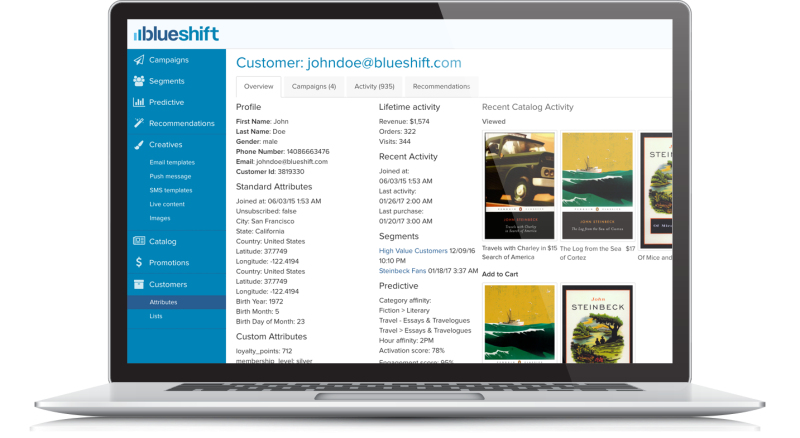 Interaction Graph enables marketing managers to manage emails, push notifications, text messages, social media accounts, and webpages in one place. They can A/B test and optimize content through Blueshift’s Personalization Studio dashboard, which allows them to segment users by behavior and demographic. Proprietary algorithms tabulate predictive scores to identify which users have a high or low possibility of completing various actions. Interaction Graph computes those users’ affinity for different product lines, categories, brands, authors, artists, and price points based on transactional data. It also highlights active and lapsing users and optionally filters users by their responsiveness to various message types and web traffic.

Blueshift’s suite also features collaborative filtering that crafts recommendations based on the behavior of customers who browsed or purchased similar items. The platform serves these through apps and websites, and its targeting tools allow managers to home in on segments of users, including those who abandon items and carts, with customized templates built on Shopify’s open source Liquid language.

Last year, Blueshift launched Channel Engagement Scores, which predicts the likelihood of a user engaging with a message on a channel such as email, push, in-app, SMS, or third-party integrations. Around the same time, the company debuted native in-app messages, which allow marketers to provide information to guide users through onboarding, app updates, and more.

Cofounder and CEO Vijay Chittoor said Blueshift, whose customers include Discovery, LendingTree, Udacity, and the BBC, delivered a 781% return on investment in a study conducted by Forrester. “With the increased urgency toward digital transformation, we have seen an increased demand for a [platform] that can not only unify siloed data, but also unify siloed experiences,” Chittoor said in a press release.