Incentive compensation platform CaptivateIQ today announced that it raised $45 million in series B financing led by Accel. The company says it plans to use the funding to expand its reach, as well as to develop AI technologies that benefit sales planning and other parts of the business connected to sales.

Management processes around commission programs can be both rigid and expensive. In fact, sales compensation represents the single largest investment for most business-to-business companies. U.S.-based enterprises alone spend over $800 billion on it each year, in aggregate — three times more than what they spend on advertising.

CaptivateIQ, which launched in 2017 as part of Y Combinator’s 2018 winter cohort, claims to automate commission workflows using AI. The 90-employee startup was founded by Conway Teng, Hubert Wong, and Mark Schopmeyer, who has a fintech background in investment banking and private equity. Teng was a corporate finance analyst at McKinsey who later helped launch loyalty rewards startup Fivestars and worked on finance at Gusto.

“Several years ago, when I was a finance lead at Brightroll, commissions was dumped on me and I was told I needed to build a new Excel model to pay out our team of 30 reps within 14 days,” Schopmeyer told VentureBeat via email. ” As a former banker, it seemed easy, but I spent the next 10 days working until 2 a.m. cleaning up the data, building the financial model, and sending out statements to the entire sales team … I later caught up with Teng and learned he was experiencing a similar pain. One thing led to another and we quit our jobs and brought on our college friend, Wong, and started building a new commissions solution that we wanted to use.”

CaptivateIQ’s no-code software collates data from disparate sources like invoices and billing systems to power real-time calculations. Customers can use it to build, preview, and launch commission plans and share them in customized reports. 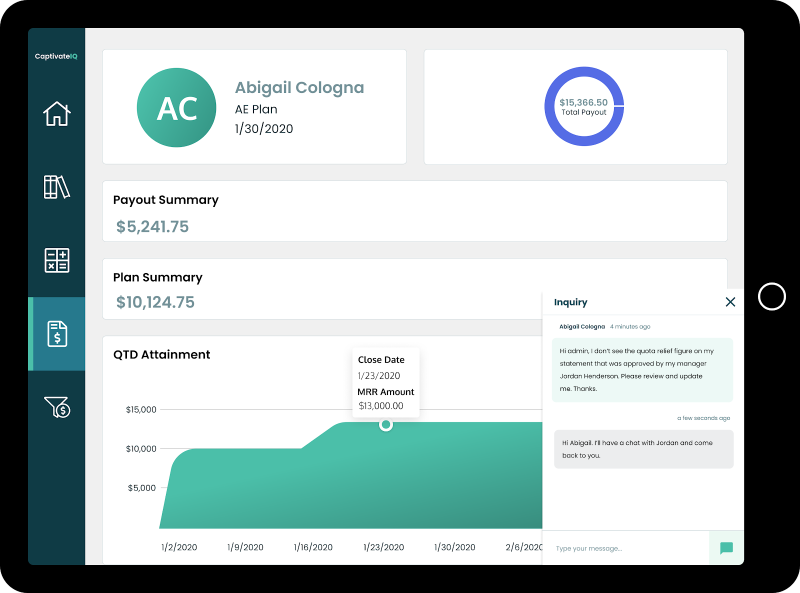 “CaptivateIQ is more than just commission software. Similar to UiPath, Ada, and Celonis, CaptivateIQ’s powerful and easy-to-use no-code platform is automating an important aspect of the sales and finance workflow,” Fletcher said in a press release. “When several of our other portfolio companies kept raving about how much time and headache it was saving their growing sales teams and businesses, we knew something special was happening ”

There’s truth to this. While CaptivateIQ isn’t yet profitable, in 2020, the company says that revenue grew 6 times as companies like Affirm, Gong, Intercom, TripActions, and hundreds of other companies used its product. CaptivateIQ claims to have processed over $2 billion in commissions for tens of thousands of employees as of this year.

“A big part of our growth is that we can help any company that offers a performanced-based compensation plan, so we don’t have any restrictions with the types of businesses we work with. We typically see conversations start with teams that have a minimum of 25 sales people, though we easily serve enterprises and public companies as well,” Schopmeyer said. “In terms of users, which we define as the number of payees, basically anybody who receives a payout is in our system, so that’s also grown significantly. December 2020 ended up 4 times from the prior year.”

Ninety-employee CaptivateIQ says that a portion of the proceeds from this latest funding round will enable it to build AI models that help people understand how taking certain actions will impact future earnings. The idea is that, by being able to model and predict outcomes, companies will be able to drive behavior that benefits their bottom line while helping employees achieve their financial goals.

“To start, we’re introducing more powerful data transformations, a richer set of formulas, and off-the-shelf templates,” Conway said. “Another goal of ours is to automate and streamline the end-to-end commissions process. We’re expanding our data integrations to support all major data systems and introducing new dashboarding capabilities that will let teams track performance and unlock business insights. We’re also enhancing existing collaboration workflows around approvals, inquiries, and contracts to enable every stakeholder in the commissions process to stay connected.”