The day has come when you can rent your own mini supercomputer. When you’re done with it, you can return it to Nvidia.

That’s the plan for the company’s new cloud-native supercomputer, the Nvidia DGX Station A100. Nvidia made the announcement during the keynote speech at its GTC 2021 event.

You can use the supercomputer for a short period of time when you need it and then return it after you’re done, said Manuvir Das, head of enterprise computing at Nvidia, in a press briefing. The DGX Station is a multi-tenant supercomputer that can be shared by as many as 28 data scientists. Also announced at GTC is a new Nvidia DGX SuperPod that will be available with Nvidia’s Bluefield-2 DPUs, enabling a cloud-native supercomputer. A DGX SuperPod consists of a bunch of individual DGX Station computers.

“You can think of us progressing in two directions, one with constant innovation to raise the bar. But the other is to really democratize AI to put it in the hands of as many companies and scientists as we possibly can,” Das said. “We are also announcing for the first time a rental model. Instead of procuring a DGX Station, customers will be able to rent a station directly from Nvidia at a low monthly price point, and they can use it for as long as they choose and then return it to Nvidia. So that’s an important direction that we are taking with the Station.”

This opens the world of AI to more enterprise customers as they investigate areas such as AI, drug discovery, autonomous vehicles, and more. Those DPUs can offload, accelerate, and isolate users’ data — providing customers with secure connections to their AI infrastructure.

Nvidia DGX SuperPod will be available with Nvidia’s Bluefield-2 DPUs, enabling a cloud-native supercomputer. It’s a full bare-metal supercomputer that is also sharable. In a keynote speech at GTC 21, Nvidia CEO Jensen Huang said the company will focus on three kinds of chips: DPUs, central processing units (CPUs) like Grace, and graphics processing units (GPUs). It will alternate between Arm-based and x86-based products, he said.

“We have to make AI easier to use,” Huang said. 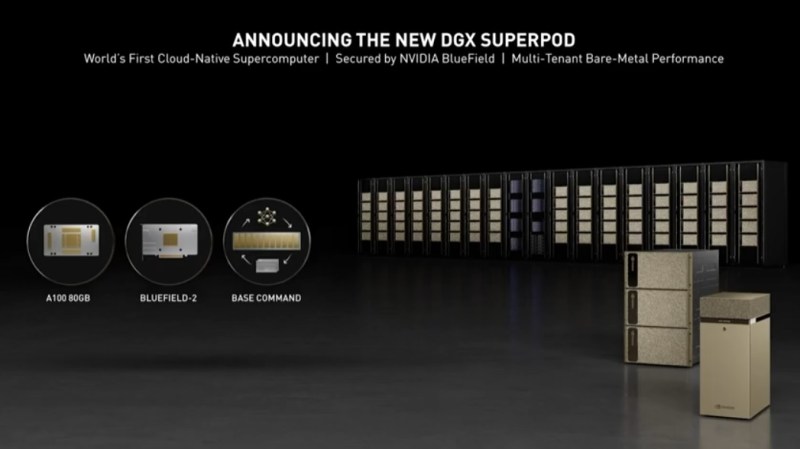 This is the first time Nvidia is turning to a rental model for DGX Stations. The idea is to broaden AI adoption for enterprise IT departments that need to support the work of teams in multiple locations or to help academic and research institutions, which often have to grant outside organizations access to their computers. DGX Stations start at $149,000, while the DGX SuperPod starts at $7 million and scales to $60 million.

The DGX SuperPods are AI supercomputers featuring 20 or more Nvidia DGX A100 systems and Nvidia InfiniBand HDR networking. Among the latest to deploy DGX SuperPODs to power new AI solutions and services is Sony, which uses the DGX SuperPod for its corporate research team to infuse AI across the company.

Nvidia also introduced a subscription offering for the DGX Station A100. The new subscription program makes it easier for companies at every stage of growth to accelerate AI development outside the datacenter for teams working in corporate offices, research facilities, labs, and home offices.

The DGX A100 is a collection of DGXs working together as one cluster of infrastructure to produce a supercomputer, Das said. Each box is capable of 2.5 teraflops of computing power. Cloud-native, multi-tenant Nvidia DGX SuperPods will be available in Q2 through Nvidia’s global partners.