CEOs are questioning the value of digital and social media marketing, with 77% of CEOs saying they don’t see digital advertising as a reliable source of new customers or sales, according to the Board to Death research by marketing tech company Bango. 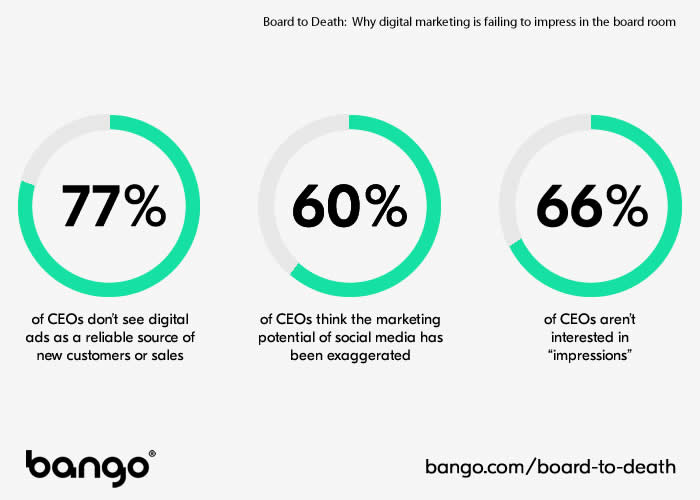 Research has revealed that boards and CEOs are rapidly losing faith in digital marketing and advertising, frustrated by metrics that don’t translate to business goals. The survey of 205 CEOs, managing directors, owners, and founders from the United States and United Kingdom found that 77% don’t view digital advertising as a reliable source of new customers or sales.

“While almost all of our CEOs have signed off budget for both social media marketing and paid social ads, the overwhelming majority struggle to understand how these channels feed into their specific business goals,” the authors wrote. “More than anywhere else, digital ad spend is where CEOs see their money pouring out, but not nearly enough coming in. With as little as 3% of ads converting, 97% of digital ad dollars are effectively wasted in the eyes of the CEO.”

Despite this skepticism, 77% of CEOs would actually increase marketing budgets if their activities could be more directly targeted towards those who buy.

The Bango report argues that digital marketing has lost its way, with many marketers trying to disguise poor results behind a haze of “meaningless metrics” that aren’t relevant to the board. Furthermore, CEOs and other board-level executives aren’t interested in vanity metrics such as shares, likes and retweets, with 60% believing that the marketing potential of social media has been exaggerated. It also raises concerns around inaccurate targeting measures, arguing that digital campaigns are rarely targeted at the audiences who convert to customers.

The survey found that 77% of CEOs expect marketing to have a measurable impact on their business’ bottom line.

Read the full Board to Death research by Bango.