OKR-tracking platform WorkBoard today announced that it raised $75 million in a series D round led by Softbank. The company says it’ll use the funds, which bring its total raised to over $141 million and its valuation to $800 million post-money, to grow the WorkBoard platform and invest in product development.

Millions of employees transitioned to remote work, either permanently or temporarily, during the pandemic. Against this backdrop, organizations have increased investments in project management software to support collaboration in the absence of physical workspaces. According to Accenture, pre-pandemic, 40% of executives felt “highly agile” to flexibly make changes, a percentage that plummeted to 18% when that agility was tested over the past 12 months.

Headquartered in Redwood City, California and founded in 2013, WorkBoard offers automated business reviews, dashboards, and customizable meeting agendas to help companies align and iterate on strategic priorities. Deidre Paknad and her husband Daryoush Paknad started the company after Deidre’s previous startup was acquired by IBM. Daryoush, a technologist, was one of the first three members of the Adobe Acrobat team and an engineering leader at Netscape. 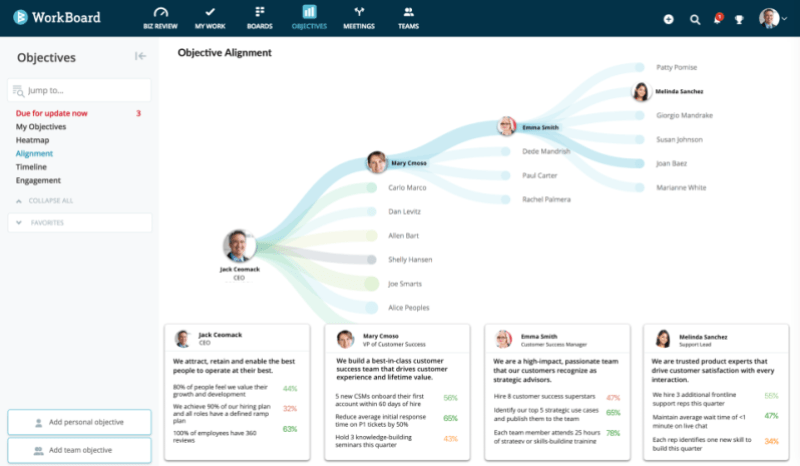 Above: The WorkBoard dashboard.

WorkBoard lets companies chart, calculate, and share progress on key results and success metrics across mobile, web, and other platforms, including Slack and Microsoft Teams. The software can run virtual or in-person meetings with metrics automatically generated. It can also capture decisions and actions, presenting the list of actions from the last meeting to follow up in the next meeting.

WorkBoard provides Trello-like Kanban boards for organizing tasks, due dates, and statuses. And the platform integrates with third-party solutions like Jira and Azure DevOps to enable companies to, for example, bring OKRs into line of sight in Jira and update results automatically from projects.

According to a spokesperson, WorkBoard uses natural language processing to make recommendations on what outcomes to measure as well as where duplicative efforts are working at cross purposes. “By capturing and managing the strategic priorities and desired business results for its customers over time for several years, WorkBoard has the ability to provide them with analytics and intelligence on what their patterns of achievement (and non-achievement) are, what causes and what correlates to the best business or strategic outcomes, and how and where to repeat what is most potent for growth,” the spokesperson told VentureBeat via email.

The development of OKRs is generally attributed to Andrew Grove, who implemented the approach at Intel during his tenure there. Intel salesperson John Doerr introduced OKRs to Google, where they took hold. Today, OKRs are used by companies like Amazon and Spotify to define goals or objectives and then track the outcome.

The global OKR software market is estimated to surpass $1.59 billion by 2026, according to Coherent Market Insights. According to a June study by Gartner, 26% of HR leaders report having used some form of software or technology to track worker productivity since the start of the health crisis. It’s an uptick driven in part by concerns over performance dips that could arise from work-from-home setups — a survey by global recruitment firm Robert Walters found that 64% of businesses are concerned about remote employees’ output.

Despite competition from Ally.io, Asana, and others, 250-employee WorkBoard says it’s nabbed hundreds of clients including Cisco, IBM, Microsoft, and a number of financial institutions, manufacturers, life science, and health care companies. The company says it grew more than 100% in 2020, more than 200% in 2019, and is on track to double this year.

“During the pandemic, WorkBoard saw an uptick in business from a wide range of industries — including financial institutions, manufacturers, life science, and healthcare,” the spokesperson said. “Companies everywhere needed to adjust their strategic priorities iteratively and rally people around them without the benefit of office proximity; visibility and cohesion got exponentially more important, and they are remarkably hard without a platform like WorkBoard. Now, in an expanding economy and pervasive changes in the way customers buy and people work, companies operate with high agility and velocity to thrive.”

“We are in an era of epic disruption and untethered talent. Engaging and mobilizing teams in creating value for customers at velocity are now table stakes in most industries,” Deidre Paknad said. “This funding helps us expand our reach and value to companies who are driving bold visions with high focus and urgency.”