Qualcomm is unveiling its platform that enables aerial drones to tap both 5G and AI technologies.

The Qualcomm Flight RB5 5G platform aims to accelerate development for commercial, enterprise, and industrial drones to help enterprises capture data from drone cameras and process that data at the edge of the network.

The platform is powered by Qualcomm’s QRB5165 processor, and it builds upon the company’s latest internet of things (IoT) offerings. The idea is to enable a new generation of low-power 5G drones that can capture a lot of data with cameras and transmit that data via 5G to an operator or send it longer distances over a network. The platform also has AI so it can determine what data is most valuable and worth sending, reducing the amount of raw traffic on a network.

Qualcomm aims to use 5G to revolutionize the robotics and drone industry, particularly by enabling drone data to be used in private 5G networks for factories and other industrial applications.

A wide range of applications 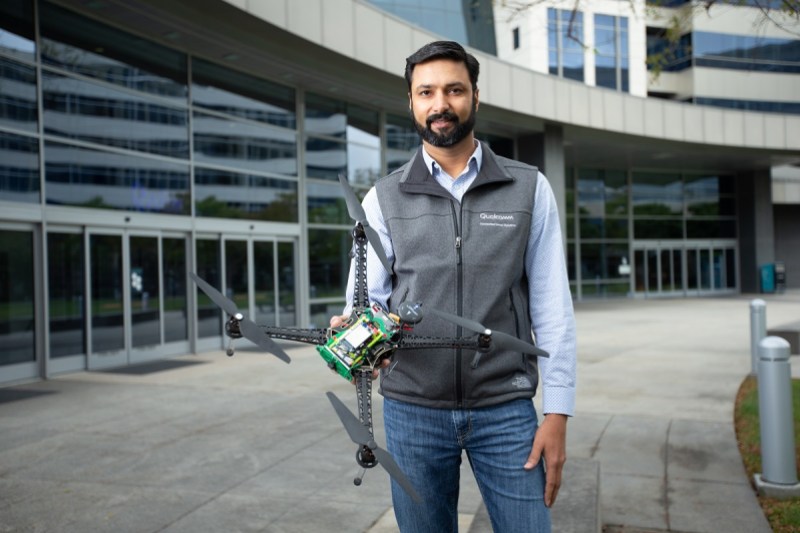 Above: Dev Singh shows off a Qualcomm Flight 4B5 drone.

The Qualcomm Flight RB5 5G platform condenses multiple complex technologies into one tightly integrated drone system to support evolving applications and new use cases in sectors such as film and entertainment, security and emergency response, delivery, defense, inspection, and mapping. VentureBeat spoke about the platform with Dev Singh, general manager of autonomous robots, drones, and intelligent machines at Qualcomm.

“Qualcomm is taking its current leadership in 5G and AI to scale the next generation of drones and IoT,” Singh said. “With 5G and AI, it is going to help accelerate development of commercial enterprise industrial drones and really open up innovative possibilities for industries looking to adopt high-performance, low power, small form factor, long-range communication, autonomous, and intelligent drones.”

The platform has eight CPUs, a graphics processing unit (GPU), a neural processing engine, and cameras that can handle 8K resolution and 4K capture at 120 frames per second.

Qualcomm launched its first drone flight platform in 2015, and it was used in the NASA Jet Propulsion Lab mission to Mars, powering the Ingenuity drone helicopter. That helicopter has made 10 flights and imaged over a mile of the surface of Mars. The second-generation drone design debuted in 2018, and it powers the Uber Eats meal delivery drones.

“We’re seeing a significant interest because the drone use cases are now going beyond hobby and commercial to the enterprise,” Singh said. “The shipments of devices are growing fivefold from a million in 2021 to 3 million to 5 million in 2025.”

Above: Applications for Qualcomm’s drone platform.

The platform supports a drone with seven cameras for capturing video data, as well as avoiding collisions with objects in the sky. It can handle power-efficient inferencing at the edge for AI and machine learning for fully autonomous drones. It connects via 5G or Wi-Fi 6 connectivity, giving drones the ability to fly beyond line-of-sight. The drone uses a Qualcomm Secure Processing Unit for cybersecurity protection.

Qualcomm is working with Verizon to complete network testing of the Qualcomm Flight RB5 platform for the Verizon 5G network, and it expects the platform, which is 5G millimeter-wave capable, to be offered via the Verizon Thingspace Marketplace.

The Qualcomm Flight RB5 5G drone reference design (a blueprint for drone manufacturers) is available for presale now through ModalAI.

The drones have been cost-reduced over the years, and now the components fit on a credit card-sized board.

Singh believes the platform will prove useful in a wide variety of applications, including oil and gas exploration, wind farms, entertainment, deliveries, public safety, agriculture, and inspection. While drone deliveries might seem far-fetched, the technology could prove essential in certain situations, such as to deliver drugs to patients who need them right away.

“We think the power of 5G and AI put together is unlocking all this potential,” Singh said.