The median duration of a network DDoS attack in the first half of 2021 was just 6.1 minutes, according to research from Imperva Research Labs. Organizations should watch out for these types of attacks as they can be a distraction tactic and part of a wider multi-vector attack. 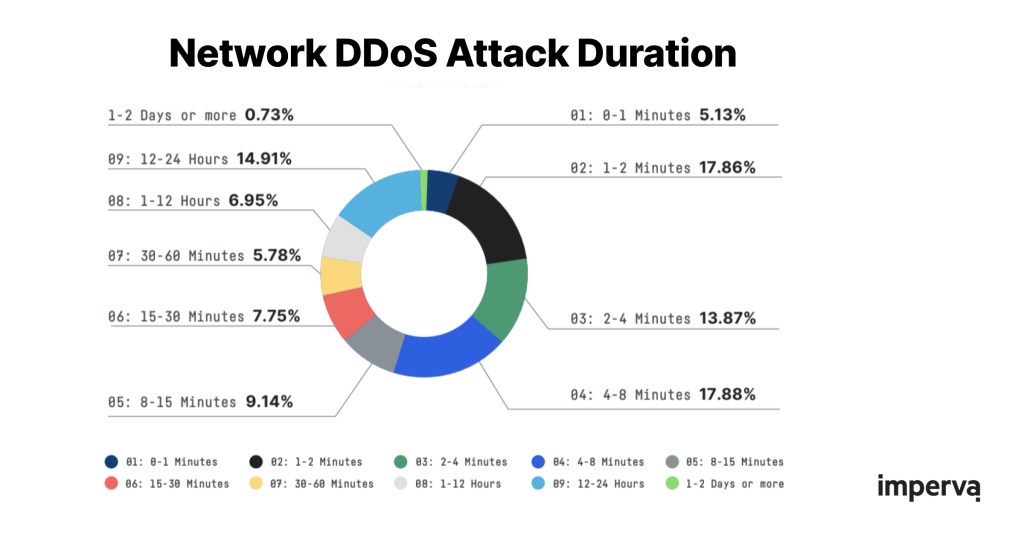 Based on an analysis of network DDoS attacks since January 2021, Imperva Research Labs witnessed a noticeable uptick in the volume of attacks carried out on Fridays. Attackers recognize this is a prime opportunity to catch organizations off guard as they head into the weekend, causing maximum chaos and disruption for the target. In comparison, Sunday had the highest volume of daily DDoS attacks in 2020, suggesting that attackers are modifying their techniques.

The 2021 Imperva Global DDoS Threat Landscape Report also details a growing trend of unskilled cybercriminals involved in executing attacks. For the price of a cup of coffee, or $100 to truly cripple a network, a DDoS-as-a-Service can be purchased online and create legitimate business impact and downtime. Unfortunately, a cybercriminal’s barrier to entry has never been lower and the capacity for damage has never been higher.

The median duration of a network DDoS attack in the first half of 2021 was just 6.1 minutes. Short, sharp attacks can overwhelm hybrid cloud and on-premises solutions, causing damage before backup cloud mitigation can start. Often, attackers will hit the same target multiple times, making it difficult to mitigate unless always-on DDoS protection is in place. The challenge is that by the time an attack is noticed, it’s already over, and there’s no telling when it would to start again. Shorter attacks can remain under the radar because organizations using unsophisticated DDoS mitigation technology configure detection thresholds that ignore lower levels of activity. While IT staff are preoccupied with getting a firewall or intrusion prevention system back online, the attackers are busy installing malware or accessing other parts of the network.

Imperva Research Labs finds that the monthly volume and size of network DDoS attacks in 2021 have significantly jumped in comparison to 2020. In the past year, network DDoS attack volume increased 200%, and the number of packets – the true measure of attack intensity — has increased 300%.

The 2021 Imperva Global DDoS Threat Landscape Report is sourced from anonymized data collected from Imperva Cloud WAF and Imperva DDoS Protection products from 2020 through the first half of 2021.

Read the full report by Imperva.