VergeSense, a San Francisco, California-based company developing technologies to track physical office usage, today announced that it raised $60 million in a series C round led by Scale Venture Partners. According to CEO Dan Ryan, the proceeds will be used to help support R&D and growth as VergeSense looks to expand its international customer base.

As some workers return to the office, often in hybrid work arrangements, a growing number of companies are investing in technologies to monitor office space usage for health and logistics reasons. According to a recent PricewaterhouseCoopers survey, most executives (68%) believe that people should be in the office at least three days a week to maintain “a distinctive company culture” — at least once the pandemic is no longer a concern. But as analysts at McKinsey note, organizations will need to reimagine and redesign their existing spaces now to meet pandemic-era needs, like managing which employees can come into the office, when they can enter and take their places, how often the office is cleaned, and whether the airflow is sufficient.

Founded in 2017 by Ryan and Kelby Green, VergeSense leverages AI including computer vision to help businesses understand how their office spaces are being used. The startup’s “sensor-as-a-system” platform consists of sensor hardware coupled with a cloud platform for pretraining machine learning models that run on the hardware, process data, and report occupancy metrics back to VergeSense’s cloud. 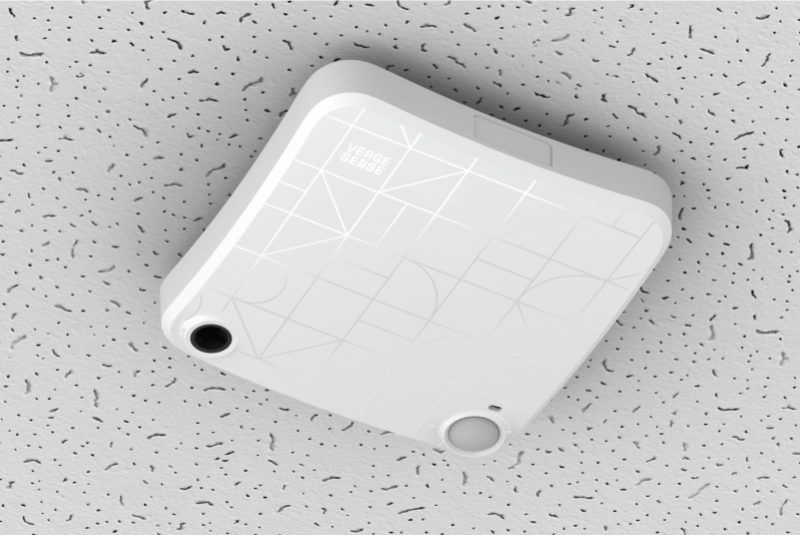 Above: One of VergeSense’s tracking sensors.

The sensors create a mesh network to communicate with each other and feed data to workplace management systems, space reservation systems, and other digital workplace tools. VergeSense’s software provides a view into office utilization across campuses, buildings, floors, rooms, and individual desks, helping employees find and reserve an available seat in real time.

“VergeSense is investing heavily to expand the AI and machine learning capabilities that have enabled best-in-class person counting, as well as our unique ‘signs of life’ measurement. For example, technological advancements have made it possible to remotely manage and automate growing industries, and VergeSense sees the opportunity to do the same for real estate management and operation,” Ryan told VentureBeat via email. “By expanding on anonymous object and scene detection using AI on the disparate datasets customers already have, VergeSense can provide a spatial intelligence platform that companies need to remotely manage, design and operate their buildings in the most efficient way.”

VergeSense says that it collects millions of data points across over 40 million square feet in more than 29 countries every day.

In response to questions about how VergeSense preserves the privacy of the workers that its sensors track, the company says that it processes only low-resolution imagery from the sensors and doesn’t capture any personally identifiable information. Raw data captures are destroyed on-device, and metadata is based on an assigned number as opposed to tied to “geographically identifiable information.”

Rent, capital costs, facilities operations, maintenance, and management make real estate the largest cost category outside of compensation for many organizations. According to McKinsey, real estate often amounts to 10% to 20% of total personnel-driven expenditures.

VergeSense pitches its platform as a way to make sure office resources are being used effectively by collecting data on movement of people throughout spaces, where people are congregating, and the condition of each space. With vacancy rates expected to climb over the next two to five years — Morgan Stanley forecasts that rates in New York will reach 10% to 12% — it’s VergeSense’s assertion that companies will need to make data-driven decisions about how to use a mix of owned spaces, standard leases, flexible leases, flex spaces, and co-working spaces. 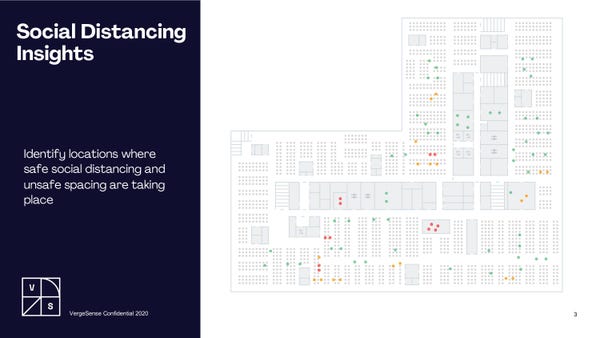 Above: A screenshot from the VergeSense dashboard.

Of course, VergeSense isn’t the only company vying for a slice of the nascent office analytics market. London-based OpenSensors is developing technology that measures air quality and space occupancy, tapping sensors that can be placed on desks to monitor motion and heat. Infogrid offers similar AI-powered, usage-tracking sensor and software technologies, as does Kleiner Perkins-backed Density.

But VergeSense has managed to secure several high-profile clients including Quicken Loans, Cisco, BP, Fresenius, RBC, Rapid7, and Autodesk. The startup recently inked an agreement with JLL, a commercial real estate services company in the U.K., to resell VergeSense solutions to JLL’s customers. And in September, VergeSense reported that annual recurring revenue grew 400% from Q2 2020 to Q2 2021.

“How employees use the workplace has become completely unpredictable. Companies are running blind, spending millions of dollars per year on real estate leases and operations while never really knowing if investments had their intended impact. The risk is wasted space, unnecessary building costs, and decreased employee productivity and satisfaction,” Ryan added. “[The rise] in hybrid working and unpredictable workplace attendance has amplified the need for workplace data and insights in order to ensure real estate investments have their intended impact and employees are engaged, collaborative, and productive.”

To date, VergeSense has raised over $82 million in venture capital.