This article is part of a VB special issue. Read the full series: Automation and jobs in the new normal.

According to a new study by the human-centered automation company Hyperscience, 81% of people believe automation can lead to more meaningful work, despite common misperceptions around what automation is, how it’s being used today, and how the U.S. workforce views it.

In its 2021 Automation Pulse Report, Hyperscience found that there continues to be widespread misunderstanding of what automation is. Specifically, while 75% of respondents believe they know what automation is, 55% brought up popular misconceptions when asked to explain that understanding further. Responses included technology existing solely to replace people (17%), automation is a job killer (3%), and conflating AI with automation (10%).

Despite the increasing adoption of automation in today’s digital-first workforce, many respondents did not identify particular benefits and use cases of automation across various industries. While 70% of respondents said automation could add value for the transportation and logistics sector, and 66% believe it adds value for financial services and banking, responses were less convinced of value adds for healthcare (48%), insurance (47%), and government/public sector (45%). 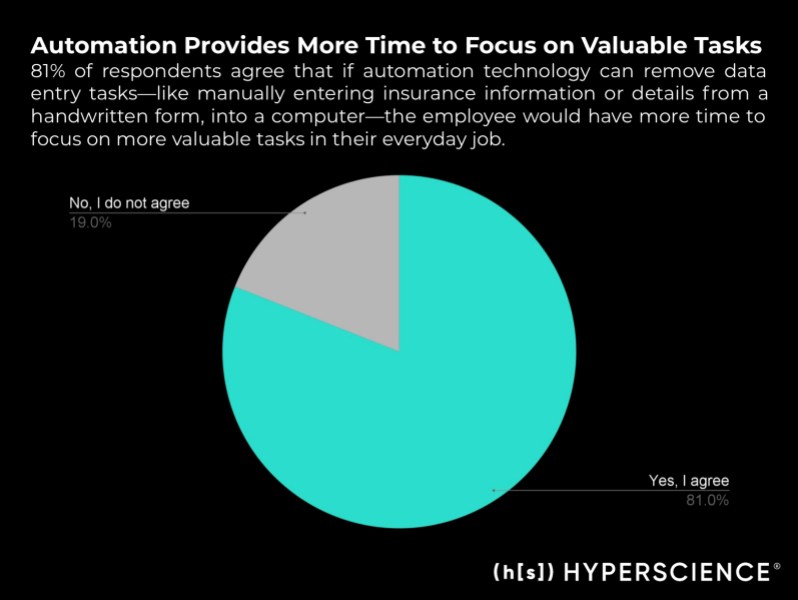 One of the bigger highlights from the study specifically focused on millennials, the largest generation in the U.S. labor force today, who are increasingly ready to work side-by-side with this technology. In fact, more than a third (35%) of millennials believe humans and machines can work together and 63% believe automation in the workplace is a good thing — especially if used to alleviate certain work burdens.

Forty-three percent of all respondents agreed with this sentiment, ranking a better employee experience as a result of using automation as the most important part of technological advancement in the workplace. Technology affecting the customer and overall customer experience (34%) ranked a close second, while only 23% of respondents selected the company as the most important beneficiary of technology.

Read the full report by Hyperscience.