Trustpage, which enables software-as-a-service (SaaS) vendors to easily communicate their data security and privacy measures, today announced a $5 million round of seed funding to expand its team and ramp up its growth in the market.

Founder and CEO Chase Lee said the company’s AI-powered platform allows business-to-business (B2B) SaaS companies to proactively address the types of questions that are increasingly being asked around handling data for privacy and security reasons. Companies use Trustpage to create a page — that’s added to their website — that covers all the steps they’ve taken to secure user data, prevent cyberattacks, and meet compliance requirements.

B2B SaaS companies are where data security and privacy issues are “most acute—because 90% of our data passes through these companies now,” Lee said in an interview with VentureBeat.

“So when we think about how we can put a dent in cybercrime and things like privacy infringement, it really is with these companies—because they’re the ones who handle the most data,” he said.

A nutrition label for data security

According to Cybersecurity Ventures, the total cost of cybercrime by the end of 2021 is expected to reach $6 trillion. And this figure is expected to surge to $10.5 trillion by 2025.

And yet, transparency about data privacy and security is often lacking, Lee explained. The process of exchanging information about handling user data remains manual in many cases — with companies often conducting a security review by trading emails or Google Docs.

For companies that do disclose data security and privacy information on their website, it’s often a DIY page that is static and difficult to update — and doesn’t offer to facilitate further information sharing, Lee said.

Trustpage addresses these issues with its platform, which allows for easier creation and updating of a searchable data security disclosure page, he said. The page can provide a secure channel for collaborative sharing between software buyers and sellers, as well.

The platform also offers AI capabilities that recommend answers to questions, recognize when content needs to be updated, and suggests content updates. Additionally, Trustpage integrates into a customer’s CRM, so they can see when their security documents are being reviewed.

The page that is created ultimately serves as something akin to a nutrition label for data security, privacy, compliance, reliability, and threat management, according to Trustpage.

“We want to help companies lean into security and trust,” Lee said. “And the hope is that if we do that with enough people, that will really start to raise the bar for security across the industry.”

Bonfire Ventures, a seed-stage investment firm, co-led the round for Trustpage. Brett Queener, a partner at Bonfire Ventures, explained that what the startup is offering is sorely needed in the industry to meet the heightened expectations for data security and privacy.

Along with largely eliminating a manual process of performing security reviews, providing transparency around data privacy and security measures can help to accelerate sales cycles, he said.

Queener, formerly an executive vice president at Salesforce, said he’s spoken with numerous chief information security officers (CISOs) about Trustpage. And across the board, he detailed that the reaction has been that if Trustpage “does what it purports to do, and is not outrageously expensive, there’s no reason I wouldn’t buy this.”

Trustpage, which became generally available in June, is also the only solution on the market that is “singularly focused” on enabling communication and collaboration around data security and privacy information, Queener said. “No one is doing what Trustpage is doing today.”

One of its customers is Dutchie, a provider of software for ecommerce and point of sale at cannabis dispensaries, which has been using Trustpage since June.

“Trustpage is key for us because it’s allowing us to establish how we approach security and privacy and compliance very early on in the customer relationship,” said Chris Ostrowski, Dutchie’s chief technology officer.

The platform has also completely replaced the manual process of providing potential customers with data security and privacy details, Ostrowski said. “Since we set up our Trustpage, those requests are down to zero,” he said. 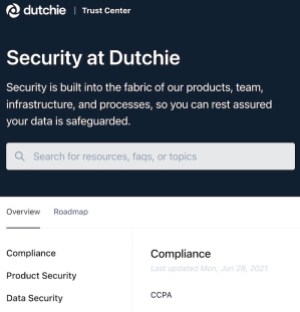 Ostrowski said he foresees a similar situation happening with trust pages that have occurred with status pages among technology companies.

If a technology company “doesn’t have a status page, that calls into question their reliability,” he said. “The same is going to apply to security and trust.”

Statuspage, a startup whose platform enabled customers to communicate about their service status, was acquired by Atlassian in 2016.

Prior to Trustpage, Lee had cofounded note-taking app Fetchnotes (acquired by Drift in 2015) and referral marketing platform Ambassador Software (acquired by West Corporation, now Intrado, in 2018), where he served as chief technology officer from 2013 to 2020.

Lee founded Trustpage in April 2020, and it had been a self-funded operation up until this $5 million seed round, he said.

Along with Bonfire Ventures, Ludlow Ventures and Detroit Venture Partners co-led the funding round. Other investors in the round are Entrée Capital, Basement Fund, and GTMfund.

Detroit, Michigan-based Trustpage currently has 14 employees, and expects to increase its headcount to 20 by the end of the first quarter of 2022, with new hires planned in engineering and marketing, Lee said.

Along with building out the team, the funding round will help to fund further maturing of the product, as well as bringing it to a wider number of customers, he said.

“This year was really about laying a foundation and getting this from a proof-of-concept to a real business,” Lee said. “Next year is really going to be about driving awareness to what we’re doing and helping reach a lot more people.”

Looking ahead, Trustpage also aspires to “build an entire community around what we’re doing,” he said.

Lee said that Trustpage’s AI-powered security scanner has mapped about 6,000 companies and begun to build a directory of their security postures, based on what they’ve shared about their data security and privacy measures. The aim is to build a directory for security that’s similar to what Glassdoor has done for employee reviews.

In the wake of software supply chain attacks, such as SolarWinds, this directory has the potential to help companies with securing their supply chains, Lee explained, “as well as just creating more transparency for the software industry.”