Affectiva today announced the launch of its Automotive AI service that lets creators of autonomous vehicles and other transportation systems track users’ emotional response. The Automotive offering is Affectiva’s third service for tracking the emotional response of product users and is part of a long-term strategy to build emotional profiles drawn from smart speakers, autonomous vehicles, and other platforms with a video camera or conversational interface.

An MIT Media Lab spinoff, Affectiva launched a voice analysis tool last year for the makers of AI assistants and social robots, but its computing services have been available to marketers and advertisers since 2010.

Affectiva can pick up emotions like joy, surprise, fear, or anger from a person’s face and things like laughter and arousal levels from their voice.

To develop its solution for cars, Affectiva has been working with OEMs, vehicle safety system providers like Autoliv, and robotaxi startup Renovo over the past 18 months, an Affectiva spokesperson told VentureBeat in an email.

Inside vehicles, Affectiva can use a combination of traditional RGB cameras and — starting today — near infrared cameras to create confidence scores based on things like the number of eyelid blinks per minute. It also uses AI models to identify drowsiness, yawning, and other signs of driver fatigue.

Factors like weather conditions or whether the car is on a highway or residential street could also be used to determine when a driver should take control.

In semi-autonomous vehicles, Affectiva will focus on monitoring drivers to increase safety and facilitate the handoff between human and machine.

“It needs to know whether the driver is paying attention or not. Is the driver tired? Is the driver asleep? Is the driver watching a movie? It really needs to understand the state of the driver, or the copilot in this case, so that it can safely transfer control back to a human driver,” CEO Rana el Kaliouby told VentureBeat in an interview.

The use of facial recognition to determine whether a driver is under the influence of drugs or alcohol will not be part of Automotive AI at launch but is part of the product’s roadmap, El Kaliouby said.

Once fully autonomous vehicles without drivers hit the road, Affectiva could switch its focus from drivers to passengers, using voice and facial recognition to recognize occupants and personalize such things as temperature and lighting inside a vehicle. In a fully autonomous vehicle world, Affectiva could be used to sense the number of riders in the car, their age, race, and gender and attempt to understand social dynamics like whether they’re friends, coworkers, or family.

“Maybe it’s about personalizing the music or the content you’re watching or even the ambience of the car, like the general temperature and all that, based on who is in the car and also what are they feeling,” she said. 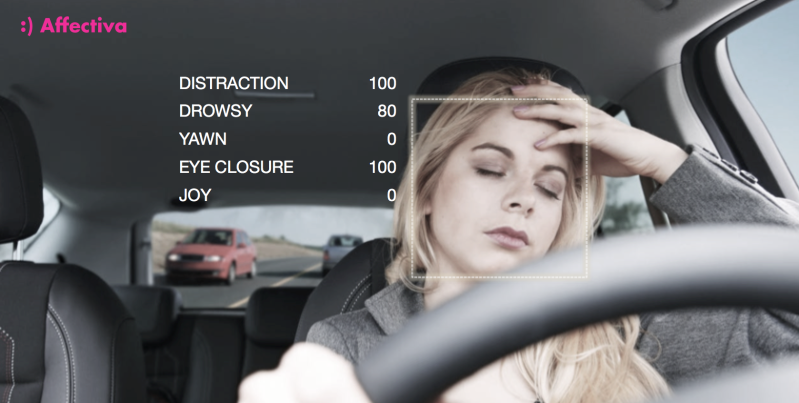 El Kaliouby believes Affectiva is well-positioned to enter the automotive market and compete with companies like Seeing Machines because it uses AI to continuously improve its product and has expanded to include a range of devices that can use cameras and microphones to detect emotion — from smart speakers to cars.

Android Auto and Apple’s CarPlay have been around for some time now, but in the past year carmakers like Ford, Mercedes-Benz, and Hyundai have made voice control available for their vehicles. And in January, Toyota agreed to bring Alexa into its cars.

More autonomous vehicles are expected to be on the road in the years ahead, and more than half of U.S. households are expected to bring smart speakers with digital assistants like Siri, Alexa, and soon Bixby into their homes in the next five years.

“Eventually, these devices will all be tied together, and ideally they would have a sense of who you are,” she said. “We feel strongly you should own your emotional profile, but I would imagine that it would make a lot of sense if these devices we are already interacting with on a daily basis had more context around who we are, what we’re doing, how we’re feeling, and what we’re thinking that could make for better user experiences.”