Hopper, the heavily financed company best known for its AI-powered predictive airfare and hotel rate platform, has raised $175 million in a series G round of funding just five months after announcing an identical figure for its series F round.

Founded out of Cambridge, Massachusetts in 2010, Hopper was initially consumed with building out its backend and archiving trillions of flight prices to answer a simple question: “Should I book my flight now or wait?” By tracking millions of flights, the company promised to save consumers as much as 40%. Apparently, two-thirds of flights will experience a price drop sometime prior to departure — the question is when?

Hopper later expanded its platform to cover hotels and car rentals, but with the pandemic hitting the travel industry particularly hard, the company was forced to swiftly extend its business model and diversify to B2B. In March, Hopper announced Hopper Cloud, a new partnership program for airlines, online travel agencies, meta-search companies, and corporate travel-related organizations. Hopper invited them to integrate its underlying engine and content as part of a white-label service. 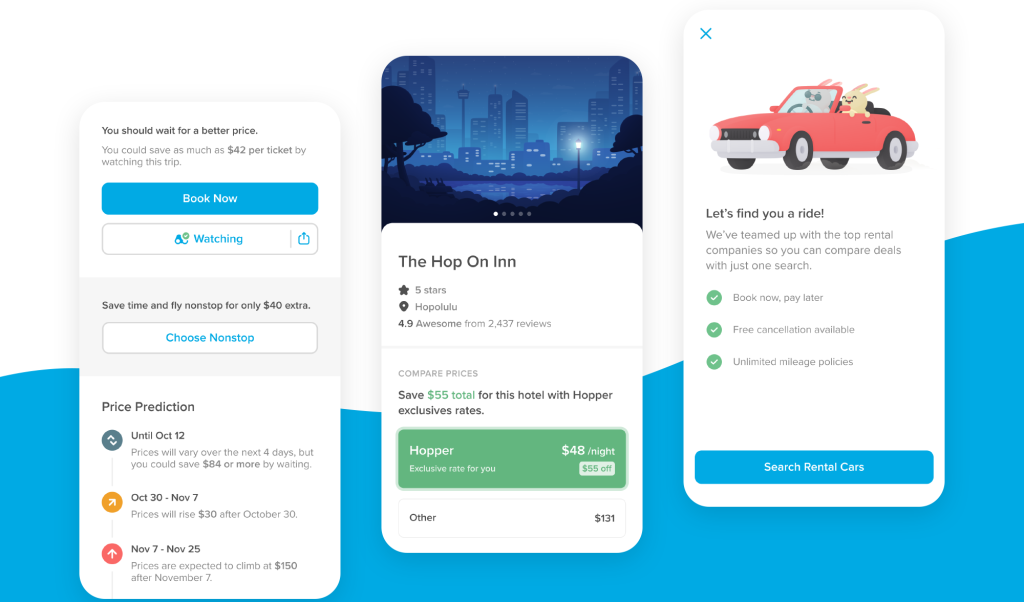 The main initial partner was fintech giant Capital One, which revealed it would be launching an upgraded Capital One Travel platform that leverages Hopper’s vast swathes of data and predictive analytics to provide a new travel booking portal for the bank’s cardholders — set to launch later in 2021. Capital One also emerged as the lead investor in Hopper’s series F round.

Hopper has sought to establish a greater fintech focus while offering customers flexibility and peace of mind around their travel bookings.

“Hopper used to be known solely for its predictions technology that told customers to buy now or wait for a better deal,” Hopper CEO and cofounder Fred Lalonde told VentureBeat. “Our business model was like every other online travel agency, where we would receive a booking commission from our airline or hotel partners when a customer booked a trip in the app.”

In late 2019, Hopper started working on a suite of AI-powered  products, including a price-freezing feature that uses “proprietary short-term prediction algorithms” to allow customers to lock in a maximum price for flights for up to 14 days and hotels for up to 60 days, with the assurance that if the price drops during that time they’ll pay the lower amount. This guarantee encourages would-be travelers to commit to a purchase. “It targets travelers early in the funnel, even before they book,” Lalonde said. “By locking in the price of the ticket, travelers are gaining certainty that it won’t increase in the volatile market while gaining time and flexibility to confirm plans with those they are traveling with before purchasing.”

On top of that, Hopper offers trip protection insurance provided by AON. More broadly, it touts a flexible approach in the event of travel cancellations or schedule changes — including a “change for any reason” plan that enables customers to reschedule a flight up to 24 hours before departure, with Hopper paying any airlines fees the change may incur. All of these features and services are available as part of Hopper Cloud, allowing travel-focused companies to integrate them into their own products.

Hopper’s new focus on fintech has helped it cement a relationship with travel-focused global distribution systems (GDS) company Amadeus, which is gearing up to distribute Hopper’s B2B smarts through its own network of airlines, travel agencies, meta-search companies, and more.

Shifting to B2B while retaining a direct consumer focus has also positioned Hopper to contend with heavyweights of the online travel realm, such as Expedia, Booking.com, and Google Travel.

Including its latest cash injection, which was led by GPI Capital, Hopper has raised around $600 million since its inception. With a fresh $175 million in the bank, the company is now well-financed to continue growing its consumer-facing platform, which has seen its mobile app downloaded some 60 million times. It is also positioned to double down on its API-powered B2B product suite.

“With the B2B business specifically, it [the funding] will be used to continue to scale the team,” Lalonde said. “The first Hopper Cloud customers are going live between now and the end of the year, but based on the current demand for Hopper Cloud, we expect it to be a major part of our operations, revenue, and capital expenditures.”

As the world slowly emerges from the pandemic, Hopper said its current run rate means it’s on course to hit 330% revenue growth compared to last year. Admittedly, the company took such a hard hit last year that it was forced to lay off 40% of its workforce, but it said it has already surpassed its pre-pandemic revenue peak (from Q1 2020) by more than 100%. Lalonde added that many of the employees who were laid off later returned, and the company’s workforce has rebounded threefold. Just before the pandemic hit, the company claimed 362 workers, a number that has now grown to over 1,000.

Other investors in Hopper’s series G round include Goldman Sachs Growth, Glade Brook Capital, WestCap, and Accomplice. Hopper didn’t reveal a specific valuation at this latest round, but it did say the number has risen fivefold since early 2020.