The global smart speaker market could top 200 million units by the end of this year, according to analysts at Canalys. The firm forecasts in a new report that the installed base of devices like Google Home, Amazon’s Echo, and Apple’s HomePod will grow from 114 million units in 2018 to 207.9 million units in 2019, an uptick of 82.4%. Furthermore, it expects smart speaker ownership will overtake that of tablets by 2021, when units sold through to consumers could approach 600 million.

“The growing installed base of smart speakers is an opportunity to create new business models and to drive profit beyond music and audio content streaming services,” said Canalys senior analyst Jason Low in a statement. “Smart assistants are becoming a conduit to offer services, such as assisted living, health care, and government services.”

Broken down geographically, Canalys predicts that the U.S. will retain its installed base lead thanks to 46% growth in the coming months, but that China, South Korea, and Japan will see 166% growth (from about 20 million units to 59.9 million units), 132% growth, and 131% growth, respectively. Elsewhere, it’s projecting Canada’s smart speaker market will grow 80%, followed by Germany’s installed base with 49% growth and the U.K.’s with 47%. 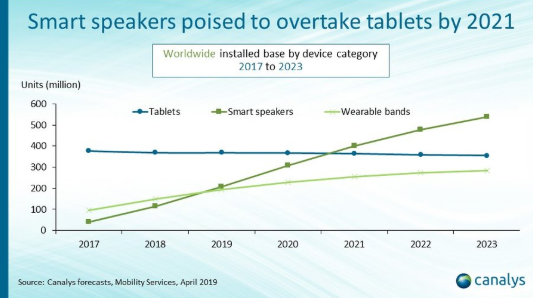 In China, Canalys predicts Alibaba’s Tmall Genie will end 2019 with the highest installed base — just short of 25 million, up 39% from roughly 10 million in 2018 — and that Xiaomi’s Xiao AI will follow close behind with 15 million units (up 25% from over 5 million). Meanwhile, devices running Baidu’s DuerOS, it says, will end the year with 14 million units (up 24% from about 3 million).

“Local vendors are bullish about China’s smart speaker market, and their aim for this year is to keep growing their respective installed bases in the country by shipping more devices into households,” Low said. “Hardware differentiation is becoming increasingly difficult, and consumers have higher expectations of smart speakers and smart assistants.”

Canalys’ latest numbers largely jibe with those from Voicebot.ai and Voicify. In a survey published in March, they found that the number of smart speaker owners reached 66.4 million in the U.S. and 133 million globally in 2019, representing year-over-year growth of 39.8%, and that Amazon’s Echo portfolio will continue to maintain pole position. Echo currently has a roughly 61.1 market share, they report, compared with Google Home’s 23.9%. 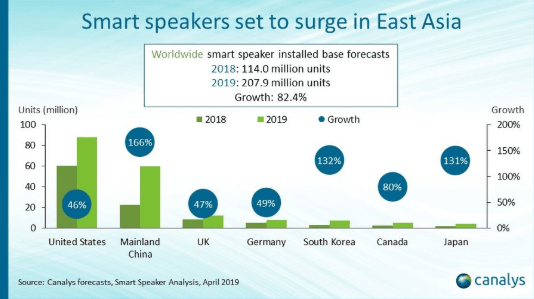 Despite the really impressive growth, it’s a bit too early to tell whether smart speakers will have staying power. A separate survey published earlier this year — this one conducted by NPR and Edison Research — found that 69% of respondents said they weren’t interested in buying another smart speaker within the next six months, with only 30% saying they were “somewhat likely” or “very likely” to buy another device.

Still, analysts at Markets and Markets forecast that the market could be worth $11.79 billion by 2023.