Contrary to popular belief, brick-and-mortar stores aren’t in their death throes quite yet. About 49 percent of people prefer to shop offline rather than online, according to Shopping.fm, and in 2016, the retail market topped a whopping $6 billion. Indeed, one of the challenges that physical stores face is keeping up with demand — in other words, making sure store shelves remain fully stocked during the year’s busiest shopping days.

Celect previously brought in $10 million in series B financing last year in February, and $5.2 million in a June 2015 series A round. Its total to date stands at $30.2 million.

CEO John Andrews — the former vice president of marketing and product management at ecommerce company Endeca Technologies, which Oracle acquired for more than $1.1 billion in 2011 — said that Celect will use the funding round to fuel its expansion to new markets.

“Inventory continues to be both retailers’ largest liability and greatest asset, and in today’s volatile market there is simply no room for guesswork or reliance on backwards looking data,” he said. “We are committed to giving retailers and brands the tools they need to make effective inventory-related decisions so they can thrive now and in the years ahead.” 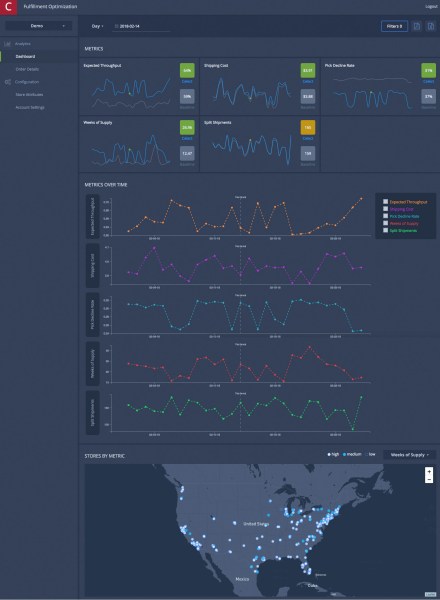 Celect — which was founded in 2012 by MIT professors Vivek Farias, who serves as CTO, and Devavrat Shah, the company’s chief scientist — taps artificial intelligence (AI) to predict buying patterns and store patron behavior. The algorithms at the core of what it calls the Celect Engine are partly derived from Shah’s foundational work in predictive algorithms, which MIT’s Computer Science and Artificial Intelligence Laboratory called one of the 50 most important technologies to ever come out of MIT.

The startup’s cloud-based dashboard collates transaction, product catalog, and browse data, plus more data both offline and online, and forecasts demand in real time from hundreds of millions of data points while flagging stores that have more inventory than they need. Its library of APIs, meanwhile, integrates with planning and operational systems like SAS and Oracle, making it easier for admins to compile reports.

The idea is to help managers avoid selling out at some locations, target stores more likely to see lower demand, and get an idea of exact spend across departments, classes, and outlets. It also attempts to predict the impact of markdowns on sales and inventory, and even suggests price points on a per-item basis.

In that regard, it’s a little like Eversight, which similarly factors in shoppers’ historical behavior to suggest prices.

“While few things remain constant in retail, the customer always comes first. One of a retailer’s toughest dilemmas is determining what, when, where, and how much customers will buy, but advances in machine learning and artificial intelligence can now solve that problem,” Upal Basu, a partner at NGP Capital, said of Celect. “[The company’s] advanced analytics platform offers retailers a reliable way to anticipate — and generate value from — customers’ ever-changing needs. By accurately predicting future demand, Celect helps retailers overcome longstanding inventory obstacles, while driving revenue and gross-margin increases.”