Last fall, when Anki released Cozmo — a programmable robot with computer vision and a fun personality — there wasn’t much you could do with it. Cozmo could recognize your face and greet you and play simple games with blocks. But now the robot is now getting smarter and easier to program with a tool called Cozmo Code Lab.

It took some amazing advances in robotics and artificial intelligence to create Cozmo, which San Francisco-based Anki worked on for years. Cozmo was the outgrowth of the AI technology that the company developed as it was creating Anki Overdrive, its award-winning race cars that can drive themselves around a track. Cozmo has 340 parts, and it also has 1.4 million lines of software code.

But it didn’t take long for people to get bored with Cozmo’s limited functionality (I saw this in my own house). Anki did release some updates to make Cozmo more functional, but now it is releasing a major free update that makes it far easier for Cozmo owners to program the robot to do just about anything, said Patrick De Neale, vice president of business development and corporate strategy at Anki, in an interview with VentureBeat. 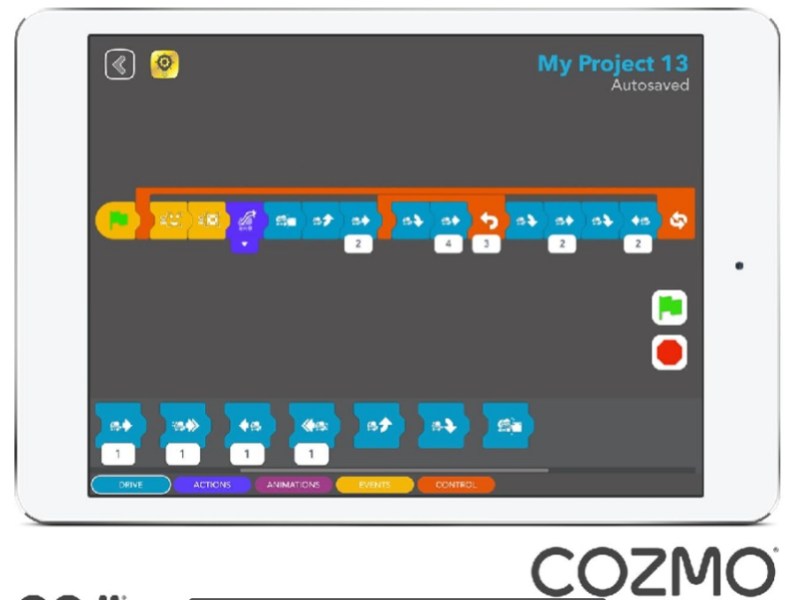 “It allows you to make use of all of Cozmo’s functionality without needing an advanced degree in computer science,” De Neale said.

Anki is releasing Cozmo’s software development kit (SDK), which opens up the hardware platform for anyone to write code for the robot. Cozmo is based on the popular Python programming language, which is simple for computer scientists but still pretty complex for novices.

So Anki created a user interface on top of the code. You can initiate it on an iPad and then tap the screen to create programs based on graphical elements. You can drag a green button to the middle of the screen to start a program. Then you can add commands that make Cozmo do things. You can also get Cozmo to repeat those tasks as needed, building a whole chain of horizontal commands that can make Cozmo do a lot of sophisticated things, De Neale said.

He showed me how it works in a demo, and with a few taps, I created my own program so when I tapped on a box Cozmo pick it up.

“We’ve tried to remove the complexity in programming a robot,” De Neale said.

You can program Cozmo to do things like blink, drive, turn to avoid an obstacle, recognize faces, and other actions that require sophisticated AI. This teaches kids and anyone else the basics of computer programming, such as “if-then” logic. And it lowers the bar for programming from high school wiz kids to grade school children, De Neale said.

Some colleges, such as Carnegie Mellon University and Georgia Tech, are already using Cozmo to teach programming. And student programmers have created games like tic tac toe and programmed pizza delivery and maze navigation. But that took a lot of work. Now Cozmo Code Lab makes it much easier to create such programs.

“Our goal as a company is to amplify robotics for everyone,” De Neale said. “What is exciting here is we can let kids do really interesting things without an incredible amount of effort. We hope it makes robotics into something appealing and fascinating.”

Anki was founded in 2010 and has raised more than $200 million in funding to date. The company has 176 employees, and Cozmo was the No. 2 best-selling premium toy in the U.S. during the fourth quarter of 2016, according to market researcher NPD Group.