In a world of ubiquitous global positioning, tracking a crowd’s movement has never been easier — if you’re not following them around an office, that is. The logistical challenges posed by corners, hallways, doorways, and conference rooms make indoor people-tracking a real problem, but that didn’t stop entrepreneur Andrew Farah from trying — and succeeding.

Farah is the cofounder and CEO of Density, a startup that uses depth-measuring hardware and a machine learning backend to perform real-time crowd analytics. Clients use its stack to figure out which parts of their offices get the most use and which get the least, and to deliver people-counting metrics to hundreds — and in some cases thousands — of employees.

“They’re usually trying to consolidate space, and they don’t know which percent of the office is not being used,” Farah said. “Office space is typically the most expensive line item next to payroll.”

It’s also the most wasteful. During a typical workweek, desks are only used 59 percent of the time and meeting spaces 39 percent of the time, research shows. And paid-for square footage often remains vacant — the federal government, for example, spends up to $1.7 billion a year maintaining 770,000 empty office buildings.

Above: The view from one of Density’s sensors.

Farah conceived of Density’s core technology at Syracuse University, in graduate school, while working at a mobile software development firm. His modest goal was to measure the busyness of a popular coffee shop, Cafe Kubal.

“I didn’t want to have to trudge through three feet of snow in the winter if there was a line,” Farah said.

He explored a couple of different solutions, but eventually settled on one — an infrared-based system — that would form the foundation for Density’s people-counting tech. The prototype wasn’t perfect — it couldn’t tell if lines were forming or differentiate between two people holding hands. But eventually, after four years of development, Farah and the startup’s growing team of engineers got it down to a science.

That’s when he realized that coffee shops weren’t the only clients who stood to benefit from crowd metrics. “We knew that the right market was corporate clients with office space,” Farah said, “because our sensor can do occupancy detection inside of a room where a camera can’t go.”

Density’s sensor operates sort of like a small laptop. It’s a rectangular box that fits in the palm of an average-sized hand, belying its complexity; it consists of over eight hundred components sourced from 137 unique supply chains Density manages itself.

The sensor attaches above a doorway, and tracks movement frame-by-frame with two infrared beams that bounce off of the floor. Algorithms filter out signal noise — boxes, strollers, pushcarts, plates, and other items being carried or pushed — to measure the direction, collision, and speed of people walking into and out of view. 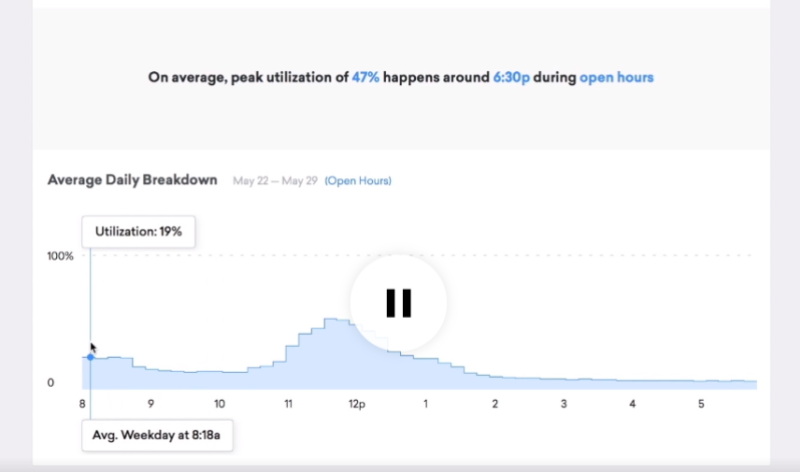 Above: The Density dashboard.

The data is funneled via Wi-Fi to Density’s cloud-hosted backend, where it’s processed and analyzed. A basic web dashboard provides insights like the real-time capacity of a room and historical crowd sizes, and an API allows third-party apps, services, and websites to make use of the data in novel ways.

One of Density’s clients — a large pharmaceutical company that Farah decline to name — uses the sensors to keep its restrooms spick and span by deploying cleaners every 70 uses. Other uses include identifying which building entrances are most used during evacuation drills, or estimating the number of people on the top floor of an office during a fire.

“Density can do a lot of good,” Farah said.

There’s another advantage to its infrared method of people-tracking, Farah said: privacy. Unlike a security camera, its sensors can’t determine the gender or ethnicity of the people it tracks, or perform invasive facial recognition.

“It’s far easier to do a camera,” Farah explained. “but we believe the data pendulum has swung too far one direction. It’s good to see people ask about data being collected.”

Density doesn’t charge for hardware. Instead, its customers — which include a homeless shelter network, theme parks, Ivy League colleges, and others — pay a monthly or annual fee for access to the data.

Ride-hailing giant Uber uses the sensors in one of its support centers to make sure the center is adequately staffed.

Asked about future expansion, Farah acknowledged that there’s potential in retail. But in the near term, he said that Density has no plans to pivot away from the corporate world.

“We’re staying focused on improving the massive square footage that’s been undermeasured [and] underused,” he said. “Our interest is in helping to design better offices.”

Density has raised more than $16.2 million from Upfront Ventures, Ludlow Ventures, Dawn Patrol, and others since its founding in 2014. It is headquartered in San Francisco.