Facebook today announced it plans to open-source some of its AI tools, including Translate, which translates 48 languages, and ELF, which teaches machines reasoning through gameplay. Facebook’s AI now conducts more than 6 billion translations a day. An ELF bot has competed with some of the top Go players around the world in recent weeks and currently has a record of 14-0, said Facebook CTO Mike Schroepfer.

“Developers can also take advantage of tools like Glow, a machine learning compiler that accelerates framework performance on different hardware platforms, and Tensor Comprehensions, a tool that automatically generates efficient GPU code from high-level mathematical operations,” the company said in a blog post. “We have also open-sourced other libraries, such as Detectron, which supports object-detection research, covering both bounding box and object instance segmentation outputs.” 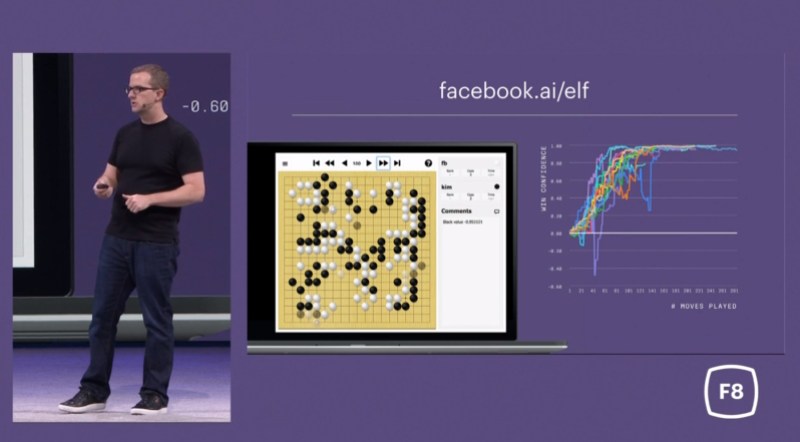 Plans to release PyTorch 1.0 in the coming months were also announced today.

ONNX, an open source project begun by Facebook, Amazon, and Microsoft last fall to make it easier to share information among open source systems like Caffe2 and PyTorch Microsoft’s Cognitive Toolkit, will play a larger role in the new edition of PyTorch. ONNX will act as the model export format in PyTorch 1.0 and will allow for the integration of accelerated runtimes or hardware-specific libraries.

The news was shared onstage at F8, Facebook’s annual developer conference taking place yesterday and today, May 1 and 2, at McEnery Convention Center in San Jose, California. Other news announced at F8 this year include the release of Oculus Go, new Facebook Stories sharing capabilities, and the reopening of app and bot reviews following the Cambridge Analytica scandal. See the full rundown here.