The failure of Boston-based Rethink Robotics last month came as a shock to employees, as well as to an industry that seems to be enjoying rapid growth. But two deals announced this week will allow the pioneering firm’s work to live on.

Germany’s Hahn Group has acquired the patents and trademarks from Rethink Robotics. A former partner, Hahn has already begun selling some of Rethink’s robots on its site. The amount paid was not disclosed.

Meanwhile, Denmark’s Universal Robots today said it has hired 20 Rethink employees and merged them into its own Boston operation.

“Our new colleagues from Rethink have extensive expertise, knowledge, and know-how, not only about the technology but indeed also about the market conditions and what the customers’ pain-points are. All of this will benefit our customers and partners as we face an increase in competitors due to the huge market potential for collaborative robots,” said Universal Robots president Jürgen von Hollen in a statement. “Our ability to secure key members of the Rethink team will have a significant positive impact in meeting market needs and driving innovation.”

Collaborative robots, or “cobots,” have become one of the fastest-growing segments of industrial robotics. BIS Research projects the market will grow from $283 million in 2017 to $3.26 billion by 2022. These robots are intelligent enough and safe enough to perform repetitive, industrial tasks alongside humans. Their lower cost compared to classic industrial robots has also made them more accessible to a broader spectrum of industries.

Founded by a researcher from the Massachusetts Institute of Technology, Rethink was an early mover in cobots. The company generated considerable hype for its collaborative robots, Baxter and Sawyer. Over the past 10 years, Rethink raised nearly $150 million in venture capital, including $18 million in August 2017. But it never was able to get enough market traction and in early October announced it was suddenly closing. Hahn says it will continue to develop Rethink’s technology. Above: Rethink Robotics’ Sawyer and Baxter

As for Universal, the hiring highlights how wildly its path has diverged from that taken by Rethink. Founded in 2005, Universal was acquired by Teradyne in 2015 and just sold its 25,000th cobot. A few weeks ago, one of its robotic arms rang the opening bell at the New York Stock Exchange to celebrate the fifth anniversary of the ROBO Global investment index.

Universal sells three cobots, ranging from a table-top version for light assembly to the largest version, designed for packaging and placing items on pallets. The cobots can handle painting, screwing, and attaching labels, among other tasks. Most importantly, they are relatively simple to set up and can be reprogrammed for different jobs as a business evolves. 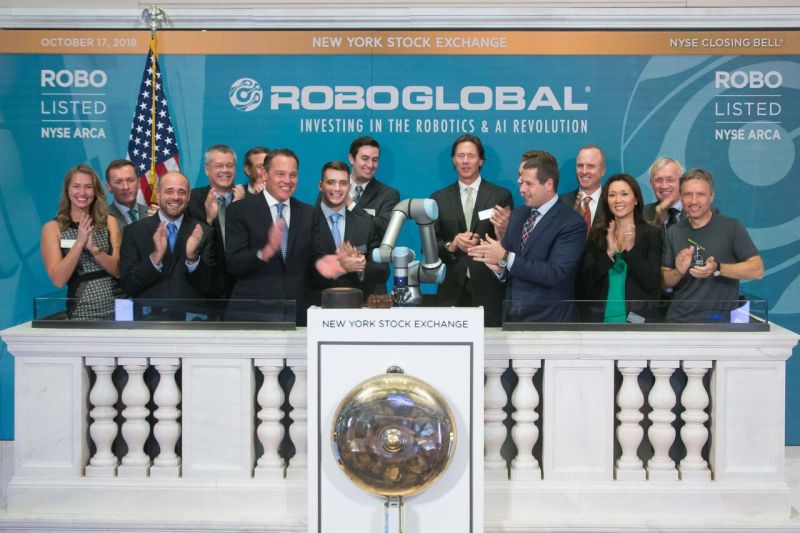 Above: A Universal Robots cobot rings the opening bell at the NYSE.

Universal said it plans to provide a roadmap to help Rethink’s Baxter and Sawyer customers transition to its own cobots.

“Rethink Robotics — along with Universal Robots — has been a pioneer in driving and developing the collaborative robotics market globally,” added von Hollen in his statement. “The company was always a good competitor, which helped us drive cobot awareness worldwide, and we want to make sure its customers can continue to fulfill their collaborative automation initiatives.”