Cofounded by Gary Fowler and Dr. David Yang, Findo has unveiled the Findo.io intelligent assistant for iPhone and the Web. This feature allows users to search locally stored files or connect their cloud-based accounts from Facebook, Dropbox, Google Drive, Evernote, Box, Gmail, Exchange, Outlook, and more to unearth information even if they can only remember vague details. 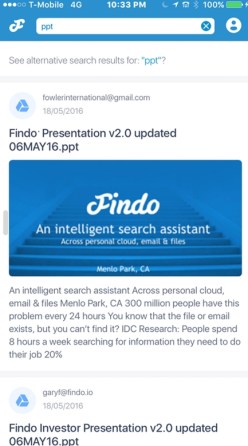 Above: Findo for iPhone

For example, while a user can search by specific keywords they know are included in file names or subject headings, Findo also uses natural language processing (NLP) to understand a very general search query such as “phone number of that guy I met in London” or “PDF sent by Jonathan last Thursday.” Alternatively, a user could search for all PowerPoint files simply by entering “ppt.”

Findo wants to create a next-generation search tool full to the brim with smarts that can even dig out relevant files by analyzing the content of photos and audio files. “You know that file exists, but you can’t find it; we all experience these problems,” said Fowler, who serves as CEO at Findo. “The average user has more than half-a-million emails, files, attachments, contacts and messages that are stored across a wide range of online and local devices.”

Findo finds its way to market

Two years in the making, Findo now counts a team of 18 at its Menlo Park, California headquarters. It also has involved some notable people, including Bill Reichert from Garage Technology Ventures, who’s serving as an advisor and board member, and Rick Orloff, formerly chief security officer at Apple, who also sits on the board. Then there is, of course, cofounder and chairman David Yang, the Russian entrepreneur behind language-based document recognition giant Abbyy.

“The ability to find information both online and locally is becoming extremely difficult for users,” said Yang. “Our estimates show that over 300 million of the total email and file searches have failed over the last 24 hours.”

In conjunction with the product launch, Findo has also closed a $3 million seed funding round from Moscow-based Abbyy, with a second $3 million seed expected to close within the next couple of months. The Abbyy connection could prove key to Findo gaining traction, given that Abbyy already bundles its FineReader product with around 12 million scanners each year to help users convert scanned images into editable documents. Fowler sees this as one potential route into millions of hands. “We anticipate bundling Findo with those scanners (too),” he told VentureBeat.

It is still early days for Findo, and the company isn’t promising a completely finished glossy product for now, but Yang is confident that people will like it. “Findo’s beta release is like a child, learning and growing, albeit a gifted child,” he said. “Please don’t expect it to know everything from day one, although by using it you will see some results.”

Indeed, while Findo did largely work fine based on our brief tests, it wasn’t nearly as extensive as it claims it will be, for example it couldn’t seem to analyze the content of images or audio files. But as a cross-cloud search tool, it was pretty fast and worked as promised.

Though Findo will exist as an iPhone and web app for now, it is working on bringing the service to other platforms, including Android, in the coming months. But before then, the company is also bringing its search smarts to third-party messaging platforms, including Slack, Telegram, Facebook Messenger, and Skype via bots. This means you can actually use Findo on any platform supported by your messenger service. 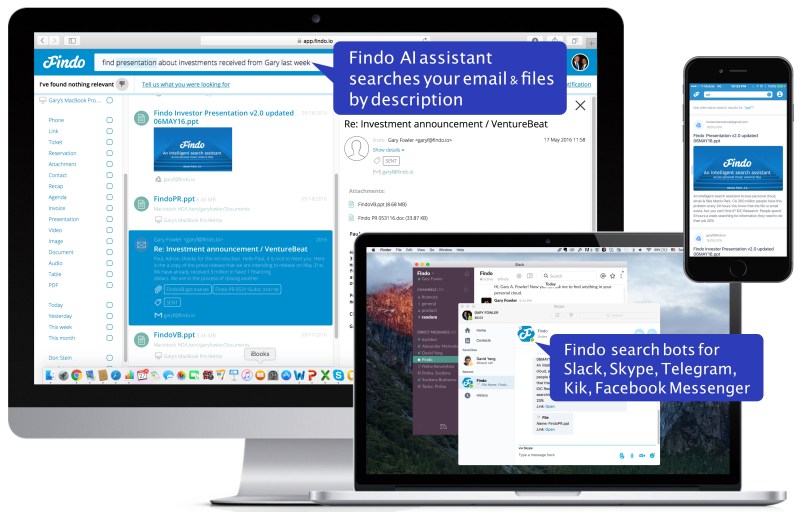 Above: Findo: Across platforms

You simply ask Findo to find whatever information you need, and the response comes back at you without your leaving the messenger app — this could be information from within an email or a specific file from your Dropbox account, such as an annual report.

Findo is one of many tech companies embracing the emerging bot revolution, with the likes of Poncho, 1-800-Flowers, CNN, and Foursquare launching bots in recent months. And just last week, Skyscanner announced a new Facebook Messenger bot to automate flight search through automated “conversations.”

Through natural-language processing and striving to “understand” your data, Findo hopes its AI engine will be powering searches across the consumer and enterprise realm.

“We are at the right time at the right place,” said Fowler. “The world is changing; all consumer and professional communication is relocating to messengers. Findo.io brings a unique way to deliver search results right into the messenger, so users can concentrate on their work without having to switch between applications.”