Disclosure: Organizers of the “France is AI” conference paid travel expenses for the reporter to attend and moderate several sessions at the event.

Tucked into a courtyard in central Paris, the 35 employees of Snips are hunched over their computers trying to put the finishing touches on a new version of the company’s artificial intelligence app for smartphones.

The company is packed full of big brains, many of them products of France’s leading universities and a culture that is historically strong in mathematics. And they’re not afraid to let you know it. Etched into winding wooden staircases that lead to Snips offices are a series of math puzzles that job recruits are asked to solve as they work their way upstairs. 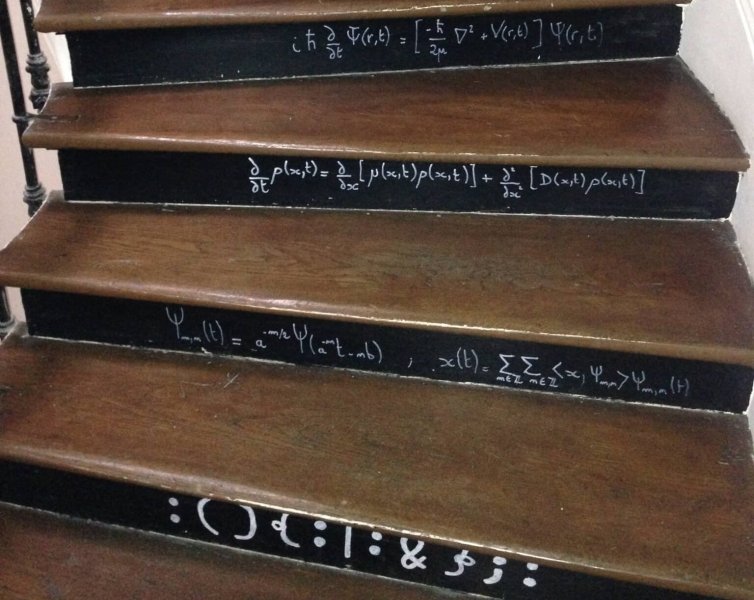 Snips’ app wants to scan all the data across the apps on your smartphones to deliver insight about you and eventually become a hyper-smart personal assistant. But it promises to take a privacy-friendly approach by keeping all the data on your phone, where it will do the processing, rather than hoovering data up into the cloud.

The complex underbelly of algorithms is based on technology developed by the three cofounders, all French and all holding PhDs with strong backgrounds in data science. The company faces enormous competition as giants like Google and Apple build more AI into their mobile products, but Snips still managed to raise $6.5 million in venture capital earlier this year.

“How can you create a digital alter ego?” asks Rand Hindi, Snips cofounder and CEO, who has a PhD in bioinformatics. “It becomes a question of collecting as much data as possible so that it learns as much about your life as possible. But if we don’t have an answer for privacy, we can’t gain the trust of users.”

Snips is one of France’s most buzzed-about startups, but for the moment it’s still flying below the global radar. The same could be said, in many ways, of the country’s entire AI ecosystem. As France tries to build a reputation as a startup nation, there is still an assumption outside the country that its strengths probably lie with its traditional industries of food, fashion, luxury goods, and entertainment.

In fact, the country also happens to have one of the world’s largest machine learning and artificial intelligence communities, something that is obscured by the fact that many of the best and brightest are hired away by the world’s largest tech firms. But within France, there are now at least 180 AI startups, according to data compiled by the Paris-based venture capital firm ISAI. And these companies are hoping that there will be enough breakout stars among them to cement the country’s reputation as a global AI hub. 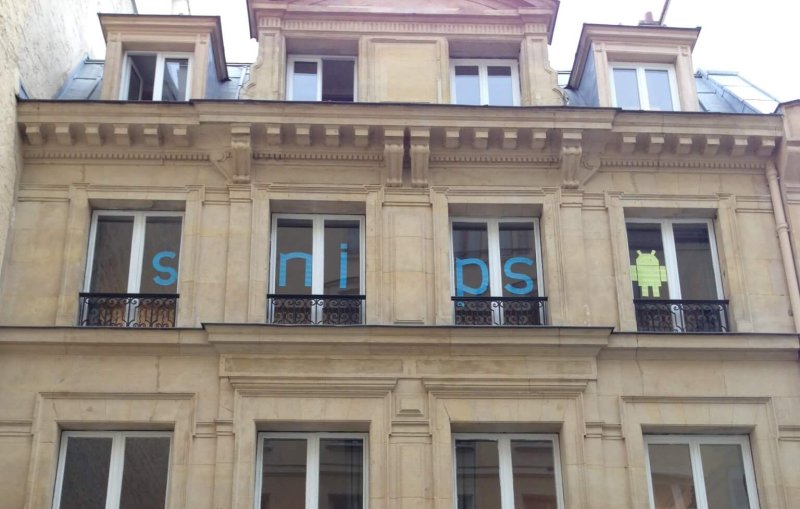 AI by the numbers

The U.S. is far out in front when it comes to the size and funding of its artificial intelligence and machine learning startups. Over in Europe, London is still considered the continent’s leading AI hub.

Between January 2014 and mid-October 2016, 111 AI-related companies in the U.K. raised $342 million in venture capital, according to data crunched by Nathan Benaich, an investor at Playfair Capital in London. There were 8 AI-related exits in that time worth a combined $900 million, according to Benaich’s numbers.

Most importantly, Google acquired London-based DeepMind in January 2014, a headline-grabbing deal that shone a spotlight on the country’s machine learning and AI chops. DeepMind’s AI technology is already being baked into a wide range of the Google’s products.

By the numbers, France lags the U.K. During that same period, 33 AI-related companies in France raised $108 million. There were three exits worth about $22 million, according to Benaich’s data.

“In Europe, the U.K. is definitely the front-runner, and that after there’s France,” Benaich said. “And after that, it’s a very steep drop. It’s still super early days for this industry. But 90 percent of financing and exit events are happening in the States.”

France isn’t completely invisible. Just as the U.K. had its DeepMind moment with Google, France got its own Silicon Valley shout-out last year when Facebook announced it was opening its global AI Research center in Paris. “France already has one of the strongest AI research communities in the world, so we think this is the ideal home for our new team,” CEO Mark Zuckerberg wrote at the time. “I’m excited for us to be taking another step toward the future of computing and connecting the world.”

Facebook had previously hired French native Yann LeCun, a New York University professor, to be director of its AI research group in 2013. And in 2015, Facebook acquired Wit.ai, a Palo-Alto based natural language processing startup launched by three French graduates of Paris’ École Polytechnique that became an integral part of the company’s new chatbot platform for Messenger.

Of course, this highlights both France’s opportunity and its challenge. There is a reservoir of talent, but many of its brightest leave for places like the U.S. or the U.K. Even many startups that begin in Paris migrate their headquarters overseas. As a result, many of these successes reflect back on France.

That’s why, Strachman argues, France is still underappreciated when it comes to AI and machine learning. In early September, Strachman, who was born in France and now lives in New York, organized a two-day conference and workshop in Paris called “France Is AI.” 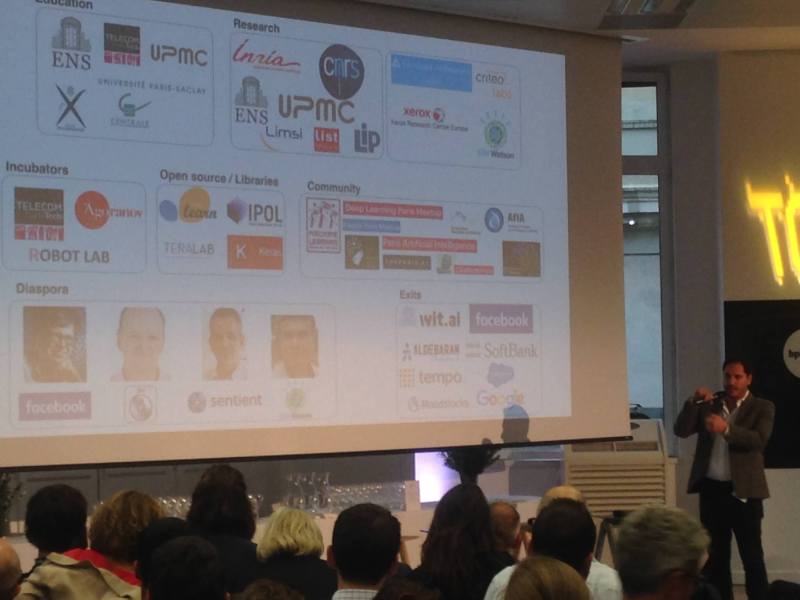 Above: Paul Strachman of ISAI presents at the France Is AI conference.

At the event, Strachman listed a number of the assets that he felt were creating strong momentum across the French AI scene.

These start with the wide range of French universities and research institutions that are churning out groundbreaking work and a flood of graduates. These include the French Institute for Research in Computer Science and Automation, a national institution that has placed a heavy emphasis on AI across its 160 projects being conducted across eight research centers, and the French National Center for Scientific Research (CNRS), which has about 600 researchers at two of its research centers focused on fundamental math and informational science problems.

This has started to attract corporate AI investment from around the world, including Japan’s ecommerce leader Rakuten, which has opened an AI research center in France. The groundswell of talent has also created some of the largest meetup groups, such as the Paris Machine Learning Group, which counts 4,000 members. And they are running some of the largest open source code libraries for AI, such as SciKit Learn.

“France is quite visible in the academic perspective when you look at machine learning,” said Alexandre Gramfort, assistant professor at Telecom Paris Tech.

From outside academia, however, not so much. That academic prowess does not always spill into the commercial world. Much of France’s academic community prefers to keep its distance from industry. The tight links between Stanford University and Silicon Valley are harder to forge here. For those who do graduate and want to go into the commercial sector, they’re often hired by Google, Twitter, or Salesforce to work elsewhere.

However, there are some signs of a shift. Strachman said his firm is now tracking 180 AI-related startups in France that work in a wide range of industries, including medicine, self-driving vehicles, and consumer.

“We are dealing with insurance only,” said Shift’s chief strategy officer Eric Sibony. “We don’t do general AI. And that’s what helped us convince investors.”

Probably the prototype for this emerging generation of French AI startups is Tinyclues, which so far has raised about $7.3 million in venture capital. The company was founded in 2010 to help ecommerce sites to use machine learning algorithms for targeting marketing campaigns.

One of the founders, David Bessis, was a mathematics researcher at CNRS and Yale before leaving academia to launch a startup. He said bridging that academic-commercial divide has not always been easy, but as France produces more successful startups, Bessis said it’s developing talent that can help AI startups do just that. In Tinyclues’ case, the company hired a product developer from Criteo, one of the country’s biggest breakout tech stars in recent years.

“France has been weak in terms of product development, but strong in terms of engineering,” Bessis said. “We have to learn and improve in that respect. But now we can leverage other people’s success to help us do that.”

Ultimately, however, what is going to determine whether France makes it onto anyone’s AI map is the ability to produce success stories. And in this case, that means some notable exits. Earlier this year, Paris-based Moodstocks was acquired by Google for its machine vision technology for an undisclosed sum. The team subsequently joined the R&D center Google opened in Paris which, among other things, includes a focus on AI.

Strachman, for his part, is hoping that such developments will slowly help build that reputation. It’s not out of a sense of ego or national pride, he said. But rather, he’s hoping that as more international VCs recognize France for its AI potential, more investment money will flow into the startups that are struggling to attract the resources they need to compete on a global basis.

“The ambition for the entrepreneurs that I’ve talked to in this space is really, really huge,” he said. “The more VCs know about the strengthening of AI and France, the easier it will be for them to raise money. We just have to continue to tweak that perception.”

Note: Here are two videos produced summing up the France Is AI event: