The French government unveiled a new strategic initiative today that seeks to make the country a world leader in artificial intelligence without compromising its notions of privacy and security.

The outlined proposals got a lift from a series of related corporate announcements, including plans by Google’s DeepMind and Samsung for new Paris labs and Fujitsu’s expansion of its existing Paris research center. The news follows announcements from Google and Facebook earlier this year of increased investments in their Paris-based AI labs.

Read more: France makes its bid to be recognized as a global AI hub

The hum of activity is the latest attempt by the government to capitalize on the growing momentum around the French Tech ecosystem, as well as the election last year of startup champion President Emmanuel Macron. Last September, the government tapped Cédric Villani, a famous French mathematician and member of parliament, to lead a study on how to develop the country’s AI economy. Results of that study were released today in a 152-page report dubbed “AI for Humanity.”

The report lays out an economic strategy for developing France’s AI ecosystem, but it also outlines the formidable task of planning for AI-induced disruptions. Challenges include employing workers who are displaced by AI and ensuring that the benefits of the technology are widely distributed. The report also raises concerns about AI research and policy being increasingly driven by the U.S. and China and warns that France and Europe risk being left behind as “cybercolonies” forced to adapt to technologies developed elsewhere.

And the report urges the government to more proactively accelerate France’s AI economy if it wishes to maintain control of its digital destiny, saying: “Now more than ever, we have to provide a meaning to the AI revolution.”

Specifically, the report proposes big increases in government spending on AI research, funds for backing AI startups, and programs to study the technology’s social impact. It also calls for vocational training to get more people into AI-related fields, as well as expanding university education programs to triple the number of graduates in AI fields by 2020.

In addition, the report recommends that the government focus on four main areas of AI: health, transportation, environment, and security. The government is also advised to establish its own AI ethics committee to study the impact of the technology and advise politicians.

“The report itself is not so important,” Petit said during the conference. “We have had reports before and there is no follow-up. What’s different now is we have the ministers here and the president will join us later, which demonstrates they are more aware and more engaged.”

French researchers have carved out strong international reputations for their contributions to the fields of AI and machine learning. And as AI development has accelerated in recent years, France has proven itself an important source of talent for companies around the world. But over the last couple of years, the country has been promoting itself as an AI hub as it seeks to gain greater recognition, nurture its own AI startups, and attract investment from larger tech firms.

On the startup side, the country is enjoying a groundswell of AI startups, as seen in this chart from tech advocacy group France Digitale: 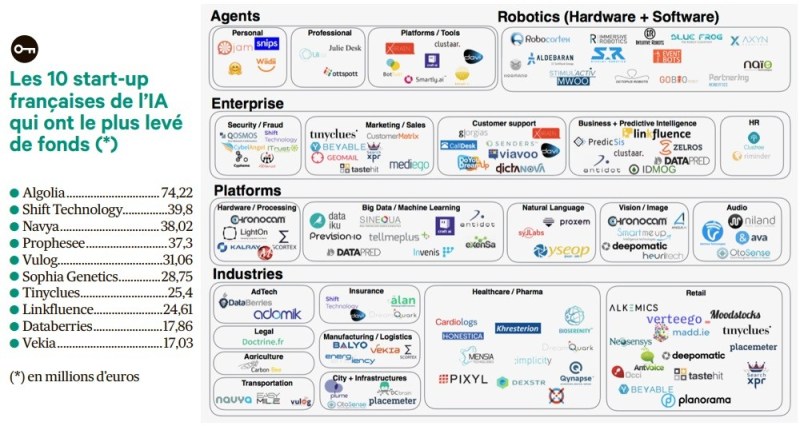 Meanwhile, London-based DeepMind said it would open a Paris lab with 15 researchers, with intentions to expand well beyond that. The Paris effort will be led by Remi Munos, one of DeepMind’s principal research scientists, who will be tasked with establishing the company’s presence in his native France.

Despite these big plans, the country faces serious challenges. The upcoming European privacy standard known as GDPR places heavy restrictions on the collection and use of private data and comes with heavy penalties for infractions. While big companies such as Google and Amazon are racing to comply, some worry that GDPR and further limits on the data that drives AI development could hurt French startups.

However, Rand Hindi, cofounder of French AI startup Snips, praised the report for emphasizing an alternative AI model that doesn’t rely on massive data collection. Snips is developing its own AI systems that keep data on local devices — rather than centralizing it — in order to offer greater privacy and security.

“So far, the AI industry has followed a centralized paradigm, or private user data [was] stored and analyzed in the cloud by foreign digital giants,” Hindi said in a statement today. “This centralization has become synonymous with dependence on digital oligopolies and cyber sovereignty loss. However, there are now technologies to decentralize artificial intelligence, executing algorithms directly on user objects without any of their sensitive information [being] sent to the cloud.”

The conference where the report was announced included several panels on AI topics and can be seen in its entirety here:

One of the speakers was Y Combinator’s Sam Altman, who is involved in the Open AI initiative to study AI’s impact and promote responsible implementation. Altman said the report’s goal of taking strong measures to ensure that AI is handled safely resonated with him.

“If we are successful, this will be one of the most transformative moments in human history,” Altman said. “So the stakes are awfully high to get it right. And the stakes are high to make sure it benefits humanity as a whole.”