Not to be outdone, the Cloud Speech-to-Text API’s multichannel recognition feature, which helps distinguish between multiple audio channels, is launching in general availability after a months-long preview. So too are improved speech recognition models that are over 60 percent more accurate than their progenitors, and Device Profiles, a feature that tweaks GCP voices for optimal playback on a range of hardware.

Google, you might recall, in April 2018 launched new premium speech-to-text models tailored to specific use cases: enhanced phone call and video. (Video was available at a premium price, while access to the new phone model was tied to participation in Google’s crowdsourced data-sharing program.) The video model is optimized for long recordings (over two hours) with lots of background noise and conversations involving four or more speakers (like TV broadcasts of sporting events), while the phone model works best with two to four people and minimal noise (think static from phone lines and hold music).

At the time, Google said the video model, which uses learning technology similar to that employed by YouTube captioning, showed a 64 percent reduction in errors compared to the default model on a video test set. Google today claims that the enhanced phone model, which is now broadly available for enterprise Google Cloud customers, has 62 percent fewer transcription errors, improved from 54 percent last year. 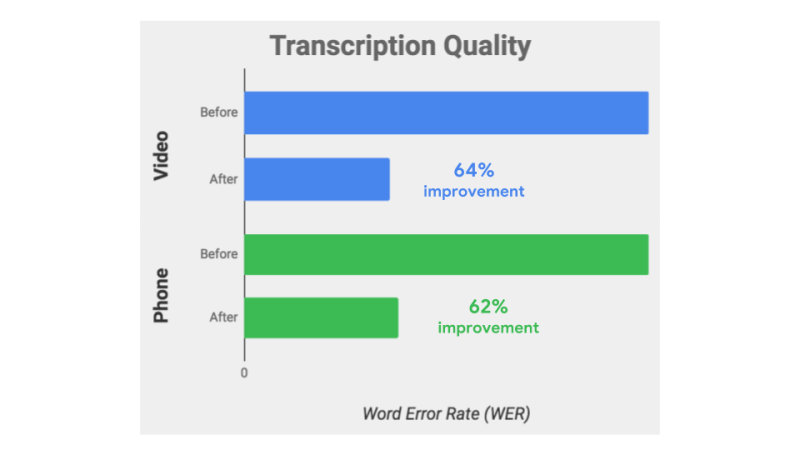 The aforementioned multi-channel recognition feature, which offers an easier way to transcribe multiple channels of audio by automatically denoting the separate channels for each word, is also generally available and now qualifies for SLA and “other enterprise-level guarantees.” For audio samples that aren’t recorded separately, Cloud Speech-to-Text offers diarization, which uses machine learning to tag each word with an identifying speaker number. (The accuracy of the tags improves over time, Google said.)

Device Profiles, which were previously available in beta, are also launching broadly today. In a nutshell, they let customers optimize the voices produced by Cloud Text-to-Speech for playback on different types of hardware. These customers can create a device profile for wearables with smaller speakers, for example, or several specially tuned for car speakers and headphones, which is particularly handy for devices that don’t support specific frequencies. Cloud Text-to-Speech can automatically shift out-of-range audio to within hearing range, enhancing clarity.

“The physical properties of each device, as well as the environment they are placed in, influence the range of frequencies and level of detail they produce (e.g., bass, treble, and volume),” the Google Cloud team wrote in a blog post last year. “The … audio sample [resulting from Audio Profiles] might actually sound worse than the original sample on laptop speakers, but will sound better on a phone line.”

Above: New pricing for Cloud Speech-to-Text.

As before, models are free for the first 60 minutes every month.

Today’s slew of updates comes after the debut of transcript generation, text detection, and object tracking in Google’s Cloud Video Intelligence API, and after the launch of Kubeflow Pipelines, a machine learning workflow meant to make ML easier for developers and data scientists. The Mountain View company also recently launched Google AI Hub — a one-stop shop for things like popular datasets on Kaggle and TensorFlow embeddings — in alpha.