NEX Team today announced the launch of HomeCourt, a smartphone app that applies artificial intelligence to videos to tally made and missed shots and offer tips for improvement.

HomeCourt was made to record activity on any basketball court and requires no special sensors — just set up your smartphone near half court. Tracking and recording of shots is now 99 percent accurate, said cofounder David Lee.

“Basketball can be overly organized and expensive. HomeCourt provides an outlet for any kid who may not have the financial means to participate in all the camps or hire an individual trainer,” two-time NBA MVP Steve Nash said in a statement shared with VentureBeat. “It truly democratizes the sport and brings advanced training insights to any player that wants to improve their game, anytime, anywhere.”

HomeCourt’s beta opened in February, and the app is now available in the iOS App Store. Current users include the Boston Celtics and NCAA teams from Stanford University and the University of Florida.

Even if HomeCourt is used in a backyard or park where no lines are painted on the ground, the app will still be able to track your free throw or 3-point percentage, and after your workout you can review each shot with video in slow motion.

“You can filter your misses and say, ‘When I miss, this is what’s going on — you know, my form is a little off this way versus when I’m making it’, and keep those things in mind,” Nex Team VP Alex Wu told VentureBeat in a phone interview.

The best users of the HomeCourt app are added to a global leader board, or you can create your own team to compete with friends or track the performance of actual teammates.

Though specific coaching insights are not being offered today, the company is beta testing a new feature called “shot science” to judge a person’s release time, how high they can jump, and shooting percentages based on the type of shots they’re taking. 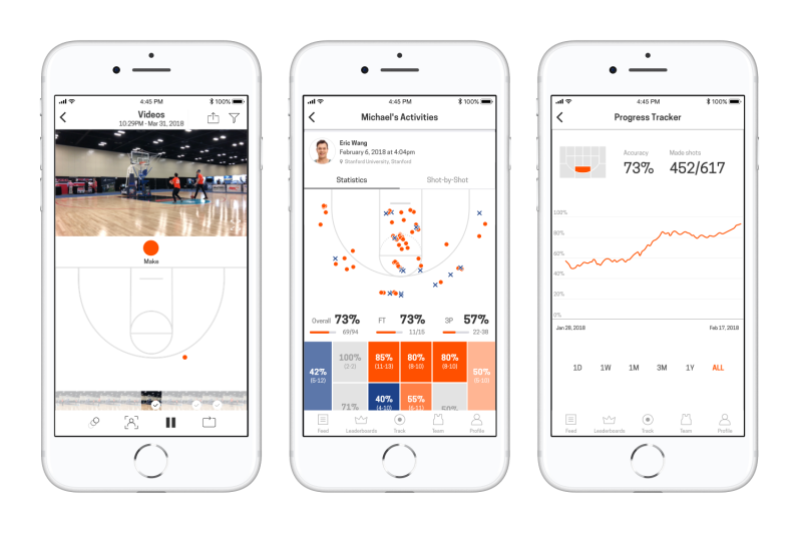 Though app users can create teams, HomeCourt is currently limited to tracking one player at a time.

The goal, Wu said, is for HomeCourt to eventually be available for tracking 3-on-3 or 5-on-5 games. To expand beyond tracking of individual players, future iterations of the app could include elements such as facial recognition software or things like jersey number, shoe color, skin tone, or other distinguishing factors.

“We just need to be able to attribute it to player one, player two, player three, and then ideally the user can just identify each player when you’re reviewing your workout — here’s his stats, his video. And then you just tag, just like you can tag a Facebook photo. [We will] eventually want facial recognition, but it is certainly not necessary.”

NEX Team was established in May 2017 and is based in San Jose, California.