This morning, Intel announced the general readiness of Pohoiki Springs, a powerful self-contained neuromorphic system that’s about the size of five standard servers. The company says the system will be available to members of the Intel Neuromorphic Research Community via the cloud using Intel’s Nx SDK and community-contributed software components, giving them a tool to scale up their neuromorphic research and explore ways to accelerate workloads that run slowly on today’s conventional architectures.

Intel claims Pohoiki Springs, which was announced in July 2019, is similar in neural capacity to the brain of a small mammal, with 768 Loihi chips and 100 million neurons spread across 24 Arria10 FPGA Nahuku expansion boards (containing 32 chips each) that operate at under 500 watts. This is ostensibly a step on the path to supporting larger and more sophisticated neuromorphic workloads. In fact, just this week, Intel demonstrated that the chips can be used to “teach” an AI model to distinguish among 10 different scents. 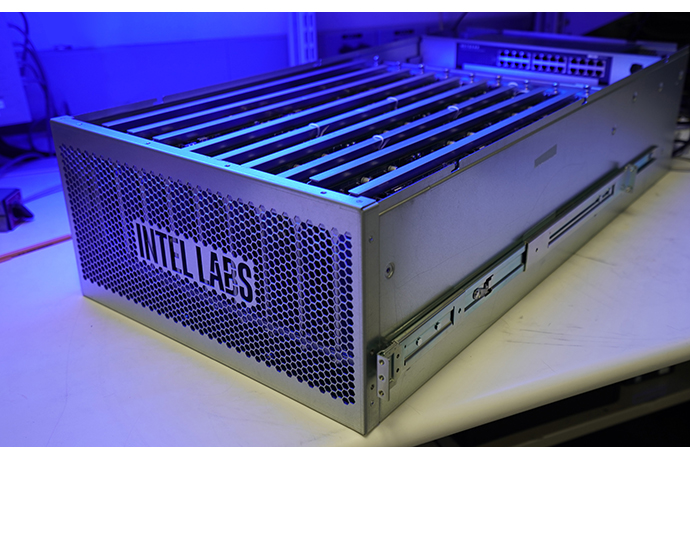 Neuromorphic engineering, also known as neuromorphic computing, describes the use of circuits that mimic the nervous system’s neuro-biological architectures. Researchers at Intel, IBM, HP, MIT, Purdue, Stanford, and others hope to leverage it to develop a supercomputer a thousand times more powerful than any today.

Intel cautions that neuromorphic systems like Pohoiki Springs are still in the research phase and are not intended to replace conventional computing systems. But Intel points out that they provide a tool for researchers to develop and characterize new neuro-inspired algorithms for real-time processing, problem-solving, adaptation, and learning.

For instance, preliminary research suggests that neuromorphic chips like Loihi excel at constraint satisfaction problems, which require evaluating a large number of potential solutions to identify the one or few that satisfy specific constraints. Neuromorphic systems have also been shown to rapidly identify the shortest paths in graphs and perform approximate image searches, as well as to mathematically optimize specific objectives over time in real-world optimization problems.

Intel’s 14-nanometer Loihi chip has a 60-millimeter die size and contains over 2 billion transistors, 130,000 artificial neurons, and 130 million synapses, as well as three managing Lakemont cores for orchestration. Uniquely, Loihi features a programmable microcode engine for on-chip training of asynchronous spiking neural networks (SNNs), or AI models that incorporate time into their operating model such that the components of the model don’t process input data simultaneously. Intel claims this will be used for the implementation of adaptive self-modifying, event-driven, and fine-grained parallel computations “with high efficiency.”

According to Intel, Loihi processes information up to 1,000 times faster and 10,000 more efficiently than traditional processors, and it can solve certain types of optimization problems with more than three orders of magnitude gains in speed and energy efficiency. Moreover, Loihi maintains real-time performance results and uses only 30% more power when scaled up 50 times (whereas traditional hardware uses 500% more power), and it consumes roughly 100 times less energy than widely used CPU-run simultaneous location and mapping methods. 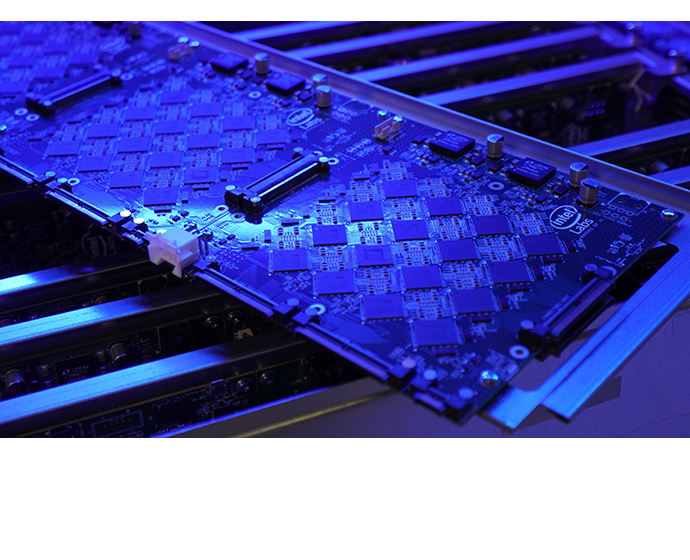 Above: A closer look shows one of the rows within Intel’s latest neuromorphic research system, Pohoiki Springs.

In July, Intel took the wraps off Pohoiki Beach, a 64-chip computer capable of simulating 8 million neurons in total. Like Pohoiki Springs, it was made available to research partners like Accenture to “advance the field” and scale up AI algorithms such as spare coding and path planning.