Kryon, a robotic process automation (RPA) startup headquartered in New York, today announced that it has raised $40 million in series C financing from OAK HC/FT, with participation from existing investors Aquiline Technology Growth and Vertex Ventures. This comes after a $12 million series B round in October 2017 and brings the company’s total raised to $53 million, according to CrunchBase.

Dan Petrozzo, venture partner at Oak HC/FT, will join Kryon’s board of directors, and Principal’s Matt Streisfeld will come on as a board observer. Kryon says it’ll use the fresh capital to “maintain its leadership position” with “continued development of … innovative technology” and to expand into new territories by growing its sales and marketing teams. The company has offices in Atlanta, Amsterdam, Frankfurt, Tel Aviv, India, and Singapore, in addition to New York.

Kryon, which was cofounded in 2008 by IDC Herzliya adjunct professor Emma Butin, offers an end-to-end enterprise platform that incorporates both process discovery and RPA. Its flagship discovery product — Kryon Process Discovery — taps an AI analytics engine to generate a picture of business processes, evaluate them, and recommend which ones to automate in attended (i.e., desktop) or unattended (virtual-machine-based) fashion. Alternatively, Kryon enables admins to manually design automation workflows within its web-based Studio dashboard and to remotely configure, schedule, and trigger RPA robots.

Kryon says its solution works with any app, including desktop and legacy programs and emulators, and that it’s capable of running processes across multiple apps. It also says that — thanks to built-in visual recognition algorithms — its robots can recognize objects and elements even if they’ve been resized, repositioned, or reshaped. 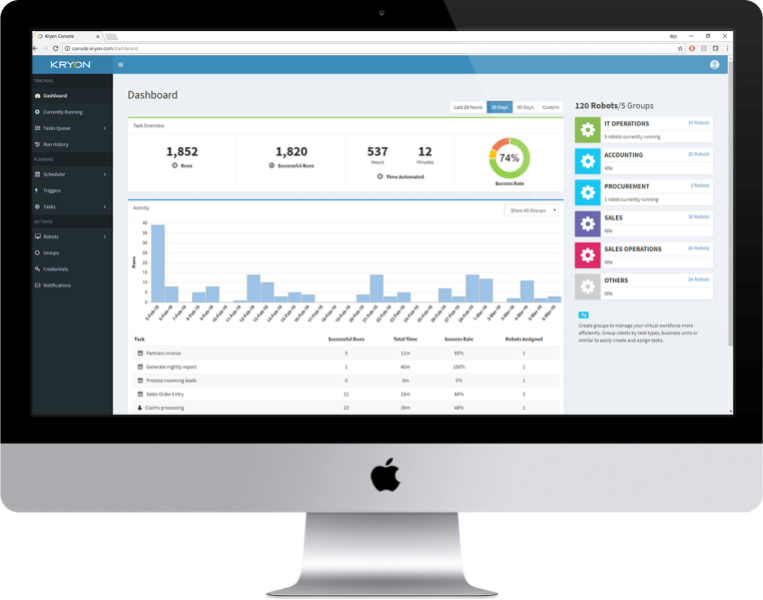 Above: The Kryon console.

In that respect, Kryon’s product is not much different from RPA offerings from the likes of Automation Anywhere, UiPath, Softomotive, and FortressIQ. However, Kryon says it has market momentum on its side. Year-over-year sales increased by more than 100 percent last year, driven by customers like AIG, Allianz, American Express, AT&T, Ernst & Young, Ferring Pharmaceuticals, HP, Microsoft, Santander Bank, Singtel Optus, Verizon, and Wyndham Hotel Group.

“Kryon’s solution stands apart for its user-friendly, fit-for-purpose platforms, including its simplified visual recognition approach to automation,” said Na-il Han, head of finance transformation at Allianz SE Singapore. “Coupled with its professional service support, Kryon has proved to be a valued partner in establishing an RPA framework that is strong and self-sustaining.”

Robotic process automation (RPA) — software that automates monotonous, repetitive office chores traditionally performed by human workers — is big business. Forrester projects that it and other fields of artificial intelligence (AI) will create jobs for 40 percent of companies next year and that a full one-tenth of future startups will employ more digital workers than human ones. Moreover, some analysts project the RPA market will be worth a whopping $3.11 billion by 2025.