Frank is a divorcé who suffers from early symptoms of dementia. Growing weary of weekly visits, his son gifts him a shiny white robot butler designed to handle daily chores and provide health care updates for the aging man.

Does this scenario sound familiar?

This quirky storyline comes from the film Robot and Frank, which was set in the near future. Although this was meant to depict a strange, fairytale world where robots become our best friends, it actually captures what the future of assisted living could look like in Japan.

Individuals over the age of 65 make up more than a quarter of Japan’s total population, which is 127 million. By 2065, 40 percent of the population is estimated to belong to this demographic.

This could justify Japan’s quick adoption of robots and smart sensors in elderly home care.

According to an estimate by the Ministry of Economy, Trade, and Industry, Japan’s market for nursing-care robots is estimated to grow 20-fold between 2015 and 2025. In fact, the government is spending one-third of its budget on the development of care robots.

Here is a look at some of the robots and smart sensors that may make life easier for the elderly in Japan. 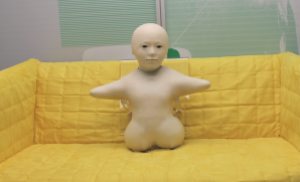 Above: The Telenoid robot.

Weighing in at 2.7 kg (about 6 lb) and standing 50 cm (almost 20 inches), the lap-sized Telenoid robot lets people talk remotely with users through a microphone and camera. This year, a nursing home in northern Japan, Urayasu, became the first to host the Telenoid robot. Devoid of facial expressions, bodily features, and gender markers, Telenoid allows users to focus on communicating.

So far, the interactions elderly people experience with Telenoid have been deemed helpful, especially for those struggling with advanced stages of dementia.

Robear is a nursing robot touted as a gentle bear that is also strong enough to lift an elderly person.

The robot’s tagline, “the strong robot with the gentle touch,” makes sense — it provides support as elders sit down and stand up, an often difficult task whose challenges can be isolating. Robear is the third robot bear created by Toshiharu Mukai, after RIBA in 2009 and RIBA-II in 2011. Mukai and his fellow developers created the robot at a partially government-funded institute called Riken.

When asked the reason for his “ursine fixation,” Mukai told The Verge, “Bears are powerful and also cute.” 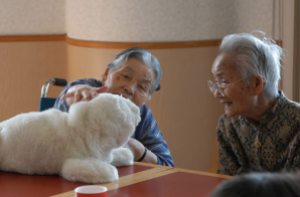 Above: Interacting with the Paro robotic seal.

Paro is an interactive therapeutic robot that relaxes and motivates people with special needs. The robot, which resembles a cute baby harp seal, stimulates interactions between caregivers and patients.

Paro has a calming effect on elders with dementia and Alzheimer’s. A recent group study confirmed that loneliness scores decreased in a group that interacted with Paro. The adorable robot made its small screen debut on Aziz Ansari’s Netflix series Master of None.

Care robots are wonderful inventions, but they are expensive. Their high price points often put them out of reach for consumers. Smart sensors are a more affordable option that can help family and home care workers who can’t afford a full robot. The technology is particularly helpful in locating elderly people with dementia who go missing.

Mimamori Eye is a locator app for your smartphone that builds a community safety net for at-risk elders. A caretaker registers people with physical descriptions and a picture; if someone wanders off, the app sends an alert to all users within 20 km. The Sapporo-based company that developed this technology, Safety Net Linkage, has also launched a dedicated hotline to report missing and found individuals.

A startup named Z-works is another smart sensor company that provides home care solutions. With no cameras involved, Z-works uses three sensors. The first is installed above the bed to measure heart rate, breathing, lighting, temperature, and any kind of movement. The second acts as a motion detector by monitoring lighting, temperature, humidity, and movement. The third is placed on a door to mark when it is opened or closed.

Z-Works recently secured a whopping $3.6 million in series A funding and is collaborating with Canon Marketing Japan to deploy a remote monitoring system in 115 care homes in Japan.

While smart sensors lack the impressive functionality of robots, they could be the best option for many consumers at this point. This is partly due to cost, but also because employing robots to help elderly individuals isn’t as simple as it seems.

As mentioned, robots are still in the nascent stage, which means they are unaffordable for many. For example, the Telenoid comes at a retail price of $8,700 and a rental price of $435 per month. Officials in Japan are debating whether compensation under public insurance should apply when hiring robots or if it should only apply following an accident. A decision on this could help more individuals access robotic elderly care in the future.

Another caveat is that the functionality of a big robot like Robear may be limited in a small apartment space. Robear recently had a circuit problem that immobilized the robot, which is an issue when you consider the life-or-death nature of the robot’s work.

Care robots have raised ethical concerns for many individuals as well, which is certainly an issue worth addressing. But for elders left in social isolation at a time when they need care the most, the potential benefits of these robots likely outweigh the downsides.