Mode.ai is making bots that use your photos to identify an item of clothing, then show you where to buy it (or a visually similar item of clothing) online. The bot can also recognize photos of home decor products and share trending topics from online retailers as varied as Amazon and Louis Vuitton.

The Mode.ai Facebook Messenger bot launched today. Send the bot a picture and it will give you three options: More Like This, Buy, and Who Wore It.

The bot also gives fans a chance to find a similar style when a celebrity is wearing something unique or limited edition.

“Two-thirds of the time — especially for celebrities, what they wear a normal person can’t actually get because the designer made it one-of-a-kind or it’s not actually available, so we’re trying to give the customer a way to get style inspiration [in] a feasible and affordable way,” Ouk said. 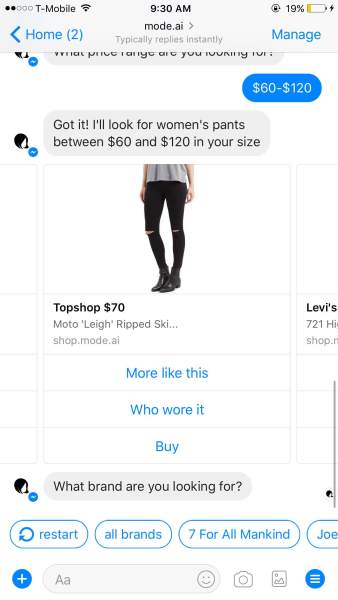 In addition to its own bot, Mode.ai plans to provide computer vision services to a series of retailers and fashion publishers to be announced during F8, an annual conference for Facebook developers that will take place April 18-19 in San Jose.

From APIs and catalogs by stores and brands, the artificial intelligence used by Mode.ai was trained by millions of pictures of products from online retailers.

Mode.ai bot draws on photos from millions of catalog product photos from thousands of ecommerce retailers.

The bot also lets you shop directly from brands like Amazon, Levi’s, Louis Vuitton, and Ann Taylor. Each experience brings the More Like This, Who wore it, and Buy options.

Today Mode.ai bot users have a simple thumbs up-thumbs down option to express preferences to the bot. In the future Mode.ai wants to use computer vision to spot trends in the photos uploaded by users. Businesses will be able to use information drawn from Mode.ai bots to gather insights about a user’s size and taste, Ouk said.

“We know the taste [and] DNA of the users by analyzing the visual properties of whatever they favorite or thumbs up,” said CEO and founder Eitan Sharon.

Earlier this year, Mode.ai was one of only two ecommerce companies listed in the AI 100 from CB Insights. Ultimately, Mode.ai believes insights it learns from training its AI can fuel ecommerce and visual product searches in augmented reality and other visual media.

The launch of Mode.ai’s bot and AI services comes as competition in the visual search / ecommerce space begins to heat up. Google, Facebook, Microsoft, Adobe, and IBM all have artificial intelligence services to power computer vision, while startups like Stitch Fix use AI to produce tailored clothing.

Pinterest has been especially busy lately. Earlier this month, Pinterest made Lens available for its iOS and Android apps and Chrome extension. Lens is a visual search tool that shares visual ideas and helps consumers find things to clothes and home decor to buy. On Wednesday Lens was integrated into Samsung’s new Bixby AI to power visual search for the intelligent assistant.

Though there’s a fair deal of competition, Sharon believes computer vision is in an age of expansion, as industries far beyond commerce and autonomous cars consider opportunities the technology enables.

“I can see how it becomes very popular from all directions — the academic and technology one, and then again all of the images and content of commerce. I would expect it to extend to anything visual, not only fashion,” he said.

Mode.ai has eight employees and is based in Palo Alto, California.