Most people don’t think of construction sites as a breeding ground for cutting-edge technology. But Jeevan Kalanithi, cofounder and CEO of San Francisco-based OpenSpace, thinks they could be.

One of the biggest managerial problems plaguing the construction industry is record keeping, Kalanithi said. Contractors working on different schedules don’t always communicate with each other, making it difficult, if not impossible, to keep on top of individual projects as they progress. “[There’s a need] to establish a ground truth,” he told VentureBeat in a phone interview, “a set of facts about what is happening when facts are in short supply … [and] when you don’t have a shared set of facts. Memories are pretty fallible.”

Kalanithi and OpenSpace’s two other cofounders, Michael Fleischman and Philip DeCamp, brainstormed a solution: a sort of Google Street View for construction sites, or what Kalanithi likes to call a “time machine for people who work in the physical world.”

OpenSpace’s hardware is about as simple as it gets: a 360-degree Garmin camera mounted to a hard hat. Construction site foremen and safety managers charge the camera via a USB cable (Kalanithi says it lasts about 10 hours on battery with an extender pack), plop the helmet on their heads, and go about their daily routine as it scans their surroundings from all angles. When it comes time to clock out, they plug the camera into a PC before heading on their merry way.

That is when the magic happens. Hours of 360-degree footage from the previous day upload to OpenSpace’s servers, which apply machine intelligence to stitch the frames together. Using sensor fusion, algorithms are able to chart the course of the camera wearer’s inspection and identify objects like windows and molding.

“We collect so much data every day, and we build exciting things on top of that,” Kalanithi said. “Office workers have had the ability to create, edit, share, and revisit their work for a long time, but that has never truly existed in the construction industry.”

In a demonstration via Google Hangouts, he showed me OpenSpace’s UI: A web-based viewer for the 360-degree camera footage with a blueprint sketch of the job site in the upper right-hand corner. Users navigate with the help of a line overlayed on the blueprint representing the contractor’s route, and with arrow keys that shift the viewing perspective forward or backward. The key feature, though, is the chronological viewer: a calendar that lets users “travel back in time,” as Kalanithi puts it, by clicking on an older recording and comparing progress over the past few weeks and months. 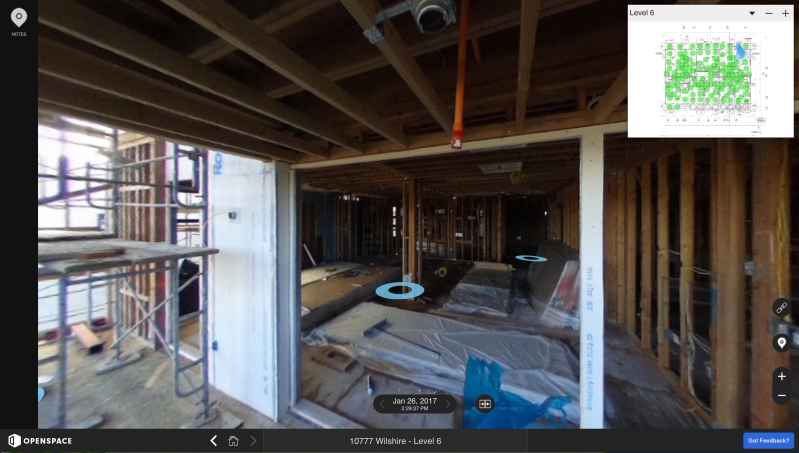 He brought up historical footage that showed piping behind yet-to-be-hung drywall. “With this, you know what’s behind the wall,” he explained. “You don’t have to knock it down.”

Kalanithi thinks his solution could increase productivity, too. There were 250,000 unfilled construction jobs at the beginning on the year, according to the National Association of Home Builders, and some workers are feeling the pinch. “Safety managers spend half of their time in the car … trying to cover all of these [construction] jobs,” he said. “Now they don’t have to physically be there.”

I asked him about privacy. Wouldn’t construction workers object to being surveilled every day?

“It’s one thing to [record] people in public, but in a professional work environment, there’s no expectation [of privacy],” he said. “It’s not been a problem.”

OpenSpace isn’t the only company bringing AI to hard hat zones. Doxel, a startup that came out of stealth in January, uses a lidar-equipped robot that scans construction sites, tracking progress by sending data to algorithms in the cloud that determine if components have been installed correctly.

But Kalanithi says OpenSpace’s ease of use sets it apart. “Because the cameras are so easy to pop on and pop off, general contractors [don’t even think about it],” he said.

OpenSpace, which was founded in September 2017, has secured funding from Lux Capital, Foundation Capital, the National Science Foundation, and others, and the startup is working with Turner Construction, one of the largest construction management companies in the United States, to deploy its technology on active sites.

Construction is a lucrative market. The industry saw $1.7 trillion in revenue in 2016, according to the U.S. Census Bureau, during a year when 700,000 construction companies employed over 7.3 million people.