There’s perhaps no retail task more time-consuming than taking stock of merchandise. Inventory tracking — that is, figuring out which products are in stock, which stock is likely to run low in the next week, and so on — is a never-ending battle, as shoppers spend an estimated 40 billion hours picking things off store shelves. It’s also error-prone — according to one study, employees regularly misplace nearly one in 10 items.

However, serial entrepreneur Richard Schwartz believes he has the answer, and it involves airborne drones with brace cages that resemble giant wiffle balls. Really.

Schwartz is the CEO and founder of Pensa Systems, an Austin startup developing a retail inventory system that taps computer vision algorithms to “understand” what’s on store shelves. Pensa has already trialed its platform with Anheuser-Busch InBev — a strategic investor — along with several other brands and retailers in multiple countries. And at the New York Retail Federation’s annual conference in New York, the company today announced that it has secured fresh capital it will put toward client acquisition.

As part of the round, Ed Cluss, a partner at Signia Venture Partners, will join Pensa’s board of directors. He’ll join Mick Mountz, founder and CEO of Kiva Systems, a warehouse automation and robotics company that was acquired by Amazon for $775 million in May 2012.

“Lack of inventory visibility is an age-old problem for brands and retailers,” Schwartz said. “Retailers and manufacturers go blind staring at products on the shelf to see what is missing or has been misplaced. Advanced artificial intelligence can borrow the best of how people perceive shelf conditions and automate it at scale to continuously read out what is on a shelf at any point in time.”

Pensa’s inventory management system, unlike those offered by  Bossa Nova, Keonn Technologies, and Simbe Robotics, eschews ground robots for the aforementioned quadcopters, which are equipped with cameras that scan store shelves for stock. With the aid of wirelessly connected Intel edge servers and self-learning algorithms that get better at recognizing products over time, the spherical drones scan and automatically sense shelf conditions with “high accuracy” as they fly between aisles.

According to Schwartz, drones have an advantage when it comes to scalability. They’re cheaper than a few of the robotics products Pensa’s competitors currently provide, in part because they’re subsidized by a data-as-a-subscription model. And in some cases they’re less complex to operate, particularly in stores with unusual and highly compact layouts.

“In-store inventory visibility remains a giant black hole for the retail supply chain,” Schwartz said. “Retailers and brand manufacturers have tried all combinations of robots, cameras, and smart shelving, but these solutions are too expensive, inaccurate, and brittle.”

During the pilot with AB InBev, Pensa’s drones collected hourly and daily inventory data in a brick-and-mortar store — IGA Extra Beck — in Montreal, Canada. Over a two-week period, they scanned dry shelves and coolers containing cans, bottles, and packs and managed to detect when an item was out of stock 98 percent of the time. 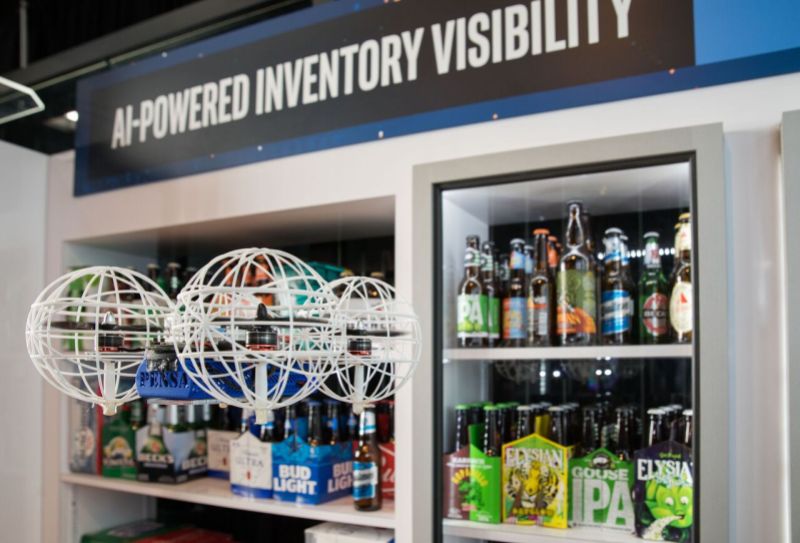 “Any solution that can help us maintain store integrity and ensure we don’t have out-of-stocks provides the competitive advantage we need,” said IGA Extra Beck owner Todd Beck. “The ability to learn about a potential out-of-stock situation hours ahead of when our manual systems might notify us represents an opportunity to drive incremental sales and make customers happier in the process. The immediate feedback we can get from the Pensa system can offer tremendous value to our business.”

Pensa isn’t the only startup using robotics to tackle the logistical challenges of brick-and-mortar businesses.

U.K. supermarket chain Ocado — one of the world’s largest online-only grocery retailers — has engineered a packing system that uses computer vision to transfer goods. Takeoff Technologies’ platform, which works out of pharmacies, convenience stores, and quick-service restaurants, doubles as a pick-up station, complete with lockers for easy access. Not to be outdone, commerce giant Walmart recently partnered with Alert Innovation in August to deploy AlphaBot, an autonomous fulfillment system capable of picking and transporting the “vast majority” of grocery items.