Advance Local today announced the launch of Pigeon, a meme-sharing Facebook Messenger bot that gives anonymous users the ability to share content or vote up or down posts shared by other users.

Initial trials began in late 2017 with memes, cartoon strips, funny tweets, and other forms of sticky visual content. With the launch out of beta, Pigeon plans to build communities to connect people around specific topics — in a fashion inspired by Reddit or earlier social news apps like Digg and StumbleUpon that were also designed to take user votes into account. 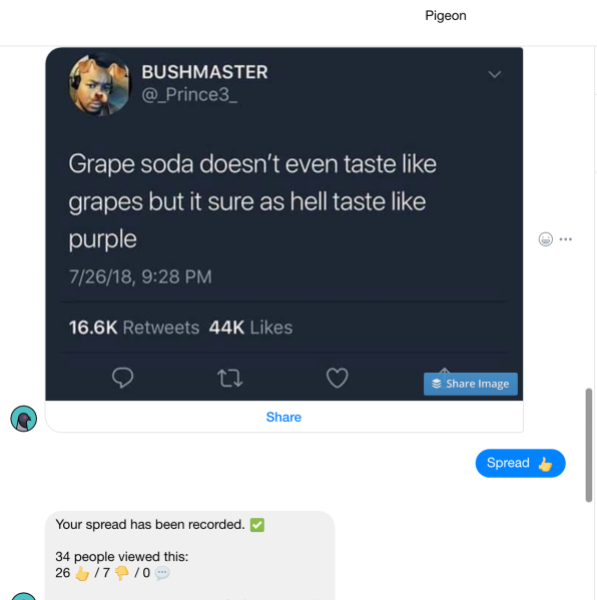 In fact, Pigeon is the third product spun out of Alpha Group, following social news polling platform The Tylt and Elsewhere, a video editing tool downloaded more than 100,000 times in its first year.

Cohn was also creator of news website Circa and of Spot.us, the first website dedicated to crowdfunding journalism.

In the future, users may be able to share links to articles or content beyond photos or memes.

Following the launch, Alpha Group will pay attention to the kind of content users vote up and down to help decide what communities to create next within the Messenger bot. Attention is also being paid to the kinds of users who prefer to vote on the latest content and those who just want to check out posts by users with the highest number of upvotes.

Content within Pigeon could vary, much like subreddits, Cohn said, and it will not be focused on feeding local news to readers.

“It won’t be an RSS feed of Advanced Media content,” Cohn said.“It won’t just be a New Jersey Star-Ledger bot. It’ll be content that people submit about New Jersey news that might be then as a user commenting.”

Pigeon is anonymous, Cohn said, to allow users the ability to “confront the content” and find community with other people based on a shared interest.

“Although it is an information and media bot, it’s actually also a community bot. Its job is to connect people to each other who are sharing news and information and content, not just a person to a media organization,” he said.