After observing the groundswell of adoption by employees in individual teams, Slack has set its sight on making its productivity platform available across entire organizations. It has launched Enterprise Grid, a new product that not only scales the core Slack experience to hundreds, if not thousands more, but gives IT administrators the regulatory and security controls across the entire company.

“This is an evolution of Slack’s very beginnings to help teams do the best work together,” remarked Noah Weiss, the head of Slack’s Search Learning and Intelligence (SLI) group, in an interview with VentureBeat. “Slack has always been a tool for large enterprise, but it grown from the bottom up (from sales, marketing, engineering, etc.) and it spreads. What we wanted to do is build a tool that not only teams loved, but also entire companies, deployed across the enterprise.” 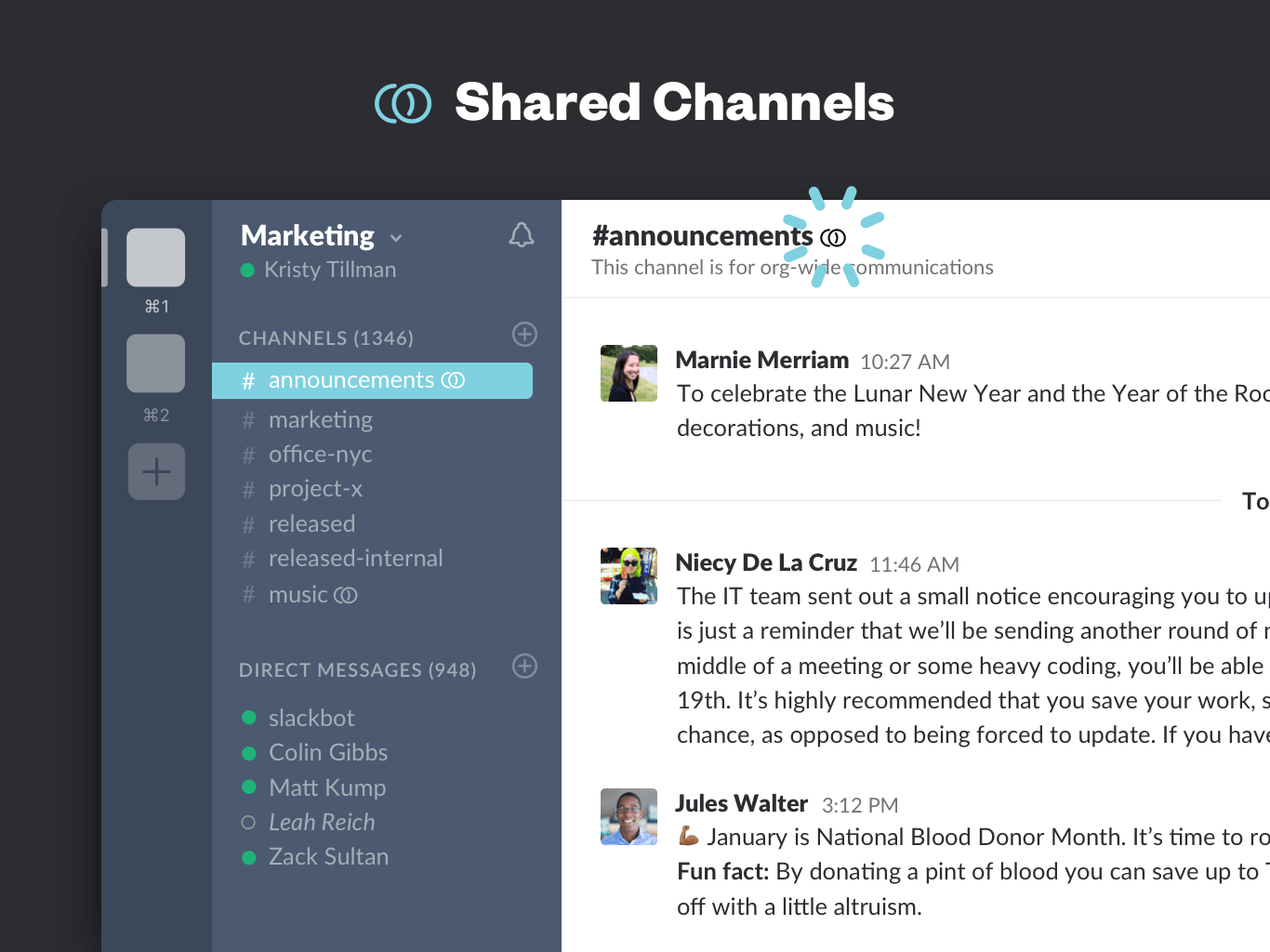 For the most part, users won’t see much difference when migrated to Enterprise Grid — they’ll have the same workspaces, channels, reactions, and threaded replies. A major advantage of this product is the ability to better collaborate among different departments with shared workspaces. When you have the number of employees like you would at a company such as Salesforce, Procter & Gamble, or Coca-Cola, having a single Slack workspace won’t cut it — it has a high propensity for information overload. Enterprise Grid lets individual teams maintain their own workspaces and channels within it, but you can have a shared channel that bridges the two workspaces for multiple product teams.

Slack touts this as being a boon to company collaboration because now there will be a “new single layer that spans the entire company, and enables people to find each other, information, and workspaces relevant to their role or team.” Traditionally, if you wanted to consult with someone outside of your team, it would have to be done via email, phone, or through a third-party communication service, but now it’s all managed within Slack. 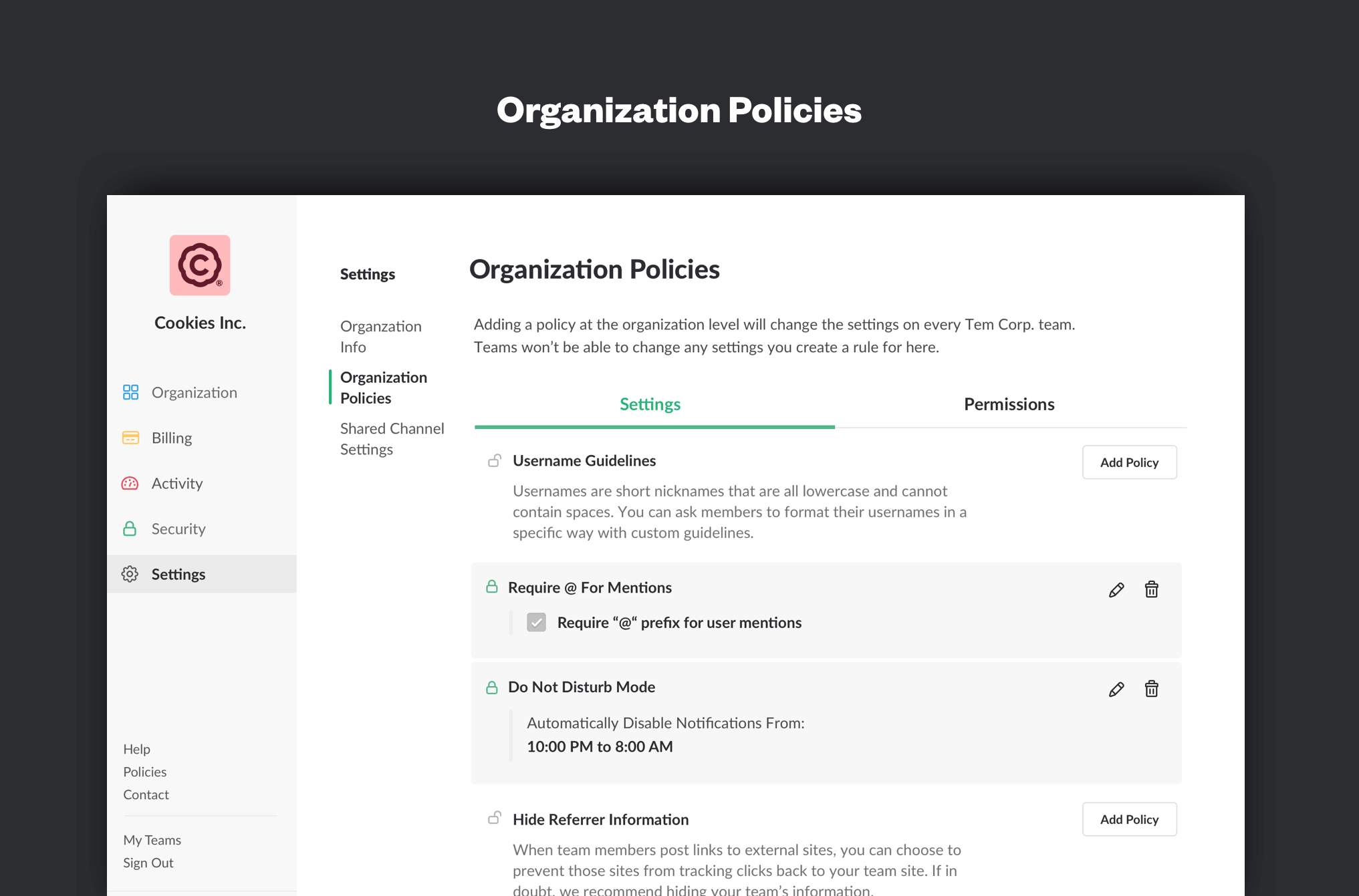 Above: Slack’s Enterprise Grid allows IT administrators to set organizational policies for all users.

Behind the scenes, the chief information officer (CIO) and IT admins can maintain the necessary security protocols to comply with corporate governance policies.

Administrators are able to control permissioning and configure app integrations based on individual workspaces. Across the board, employees could be barred from sharing public files, controls who can create or archive channels, where people can post, and more. And with more than 900 apps in Slack’s App Directory, admins can supervise what gets deployed across entire organizations.

Among the features included in Enterprise Grid are identity management, allowing organizations to sync with services like Okta to ensure current employees have access, as well as compliance checks to prevent data loss and preserve security. Slack has received HIPAA and FINRA certification, similar to what Box has done, which can expedite implementation in highly regulated companies such as in health care and financial services. The company is also working with PaloAlto Networks, Bloomberg Vault, Skyhigh Networks, Netskope, Relativity by KCura, Smarsh, and other data loss prevention providers so companies can know their data is being protected.

And just like with Slack’s core offering, all data is encrypted in transit and at rest.

Enterprise Grid is only available in the cloud, so those looking for on-premises installations are out of luck.

It should be noted that today is the public launch of Enterprise Grid. Slack did test out the app with dozens of companies like eBay, Capital One, and IBM. 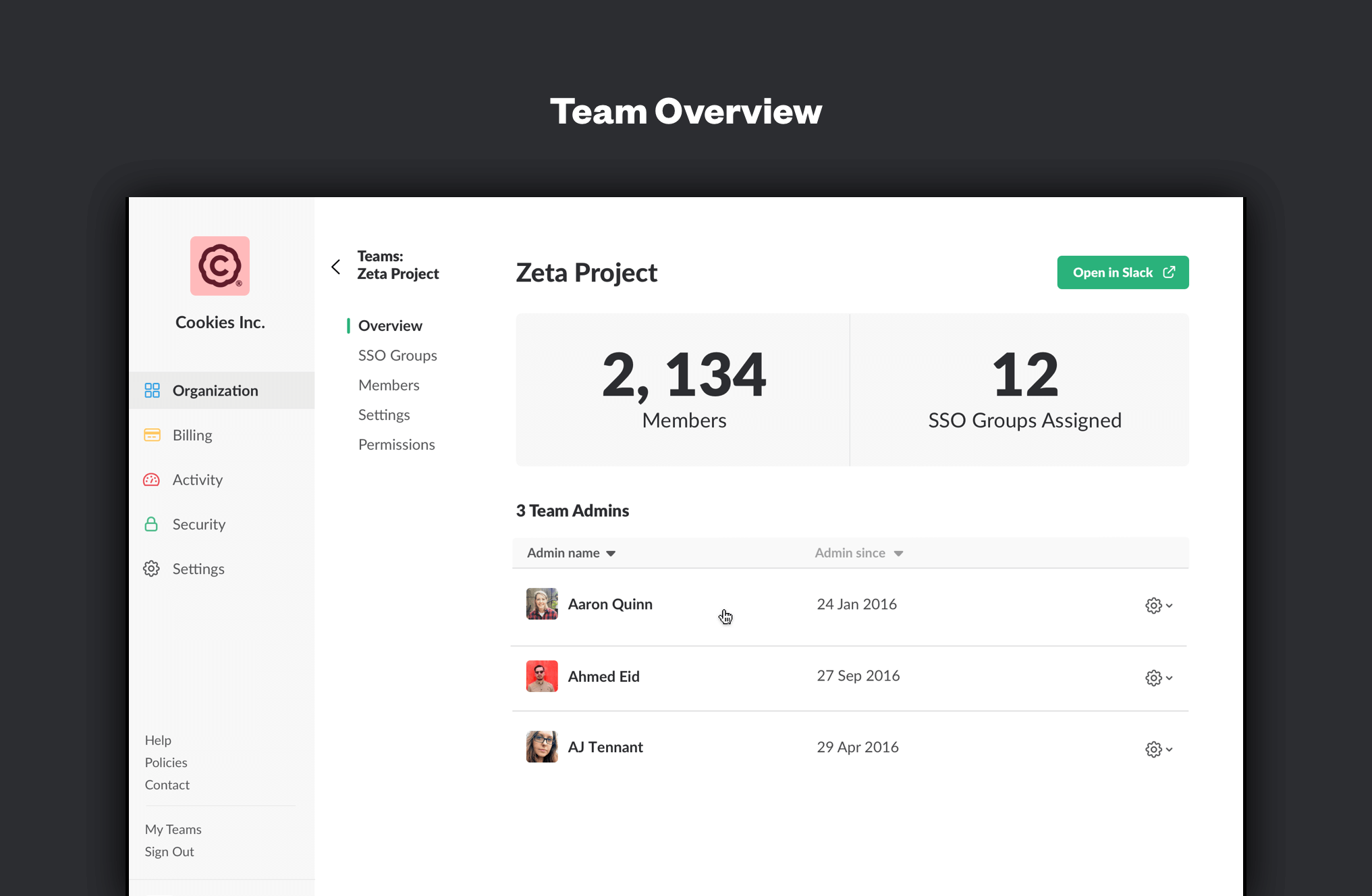 The launch of Enterprise Grid was teased back in November when Slack chief technology officer Cal Henderson revealed the company was beta testing a solution. “We are in beta with various enterprises,” he said. “For IT, there is a challenge of sprawl. Many teams have individually expensed Slack.” Some large-scale deployments that have been made include with IBM and Autodesk, and now Slack is adding PayPal and SAP to the mix.

Through its relationship, SAP will soon launch bots on Slack, including ones for Concur (expense tracking), SuccessFactors (HR administration), and its own Hana Cloud Platform (real-time reporting). Other partnerships that have been made include with Google, Salesforce, and IBM Watson.

Slack’s Enterprise Grid puts the company in direct competition with similar solutions from Cisco, Microsoft, Atlassian, and Facebook, all of which seek to capitalize on communication and productivity in the workplace. Steve Goldsmith, the general manager of Atlassian-owned HipChat, claimed that Slack wasn’t thinking about the bigger picture:

Many of the chat tools that claim to be for the enterprise actually have limited team capacity, and work around enterprise scale with some creative licensing and federation. Modern work relies on cross-functional teams to be successful. In certain situations, a team of developers may need to collaborate with customer service teams, communications and sales. These services that include federation of team channels are creating artificial barriers to efficiency, in a time when effective cross-functional teams are the objective of every C-suite leader in the world.

When asked about the competition, Weiss believed it vindicated Slack’s position. “Instead of CIOs saying that they have hundreds or thousands of people using [these services], now very large companies are confirming to CIOs that this is an important category,” he remarked. “At the end of the day, the proof is in the pudding. It’s how people feel about Slack every day.”

One thing that could appeal to companies is the customization that could occur within Slack — basically a build-it-your-way system. While you receive the standard chat interface, there are hundreds of apps that you can integrate to make Slack work right for the multitude of teams that exist. And developers seem to be excited about the prospect of getting their work in front of larger audiences.

“We are excited that Slack’s enterprise offering will provide ways to manage multiple teams in the organization and foster cross-communication among those teams,” says Bhaskar Roy, head of growth for Workato. “Starting today, we have support Slack for Enterprise with the ability to easily integrate and automate workflows across multiple Slack teams. Further, IT admins can also manage and govern these integrations using Workato’s administration console, Aegis.”

Preview of things to come 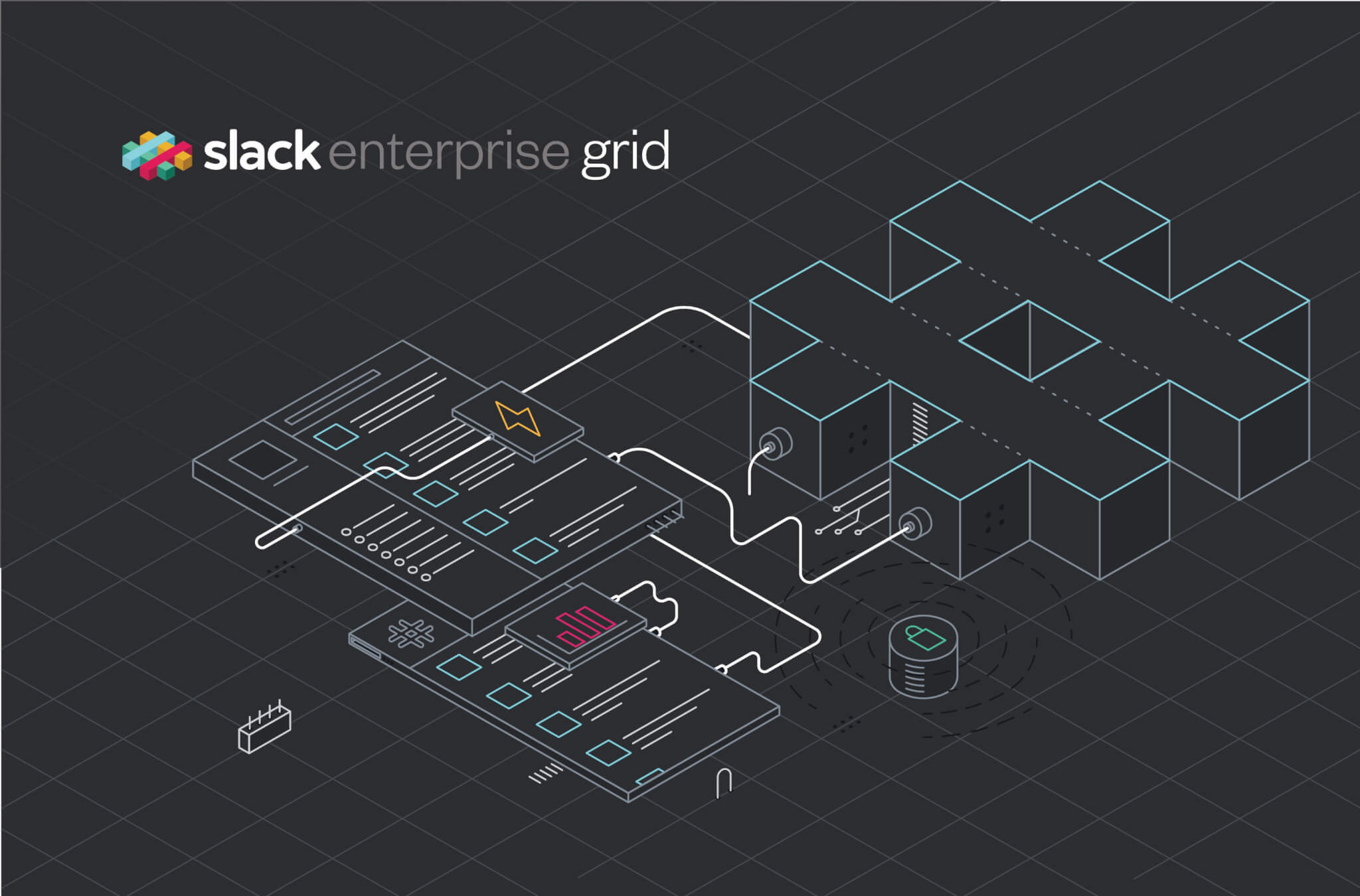 As the head of SLI, a group centered around artificial intelligence, Weiss shared some of the work that will soon be released by Slack, all centered around preventing information overload. Among these features is an improved search capability that will not only surface relevant messages, but appropriate people, channels, and files — all within a single results screen. The team is also working on what they’re calling faceted search, which promises to apply filters and the ability to refine searches.

It’s easy to get caught up with small teams, but when you’re dealing with an entire organization, things can get more complicated. This is why Slack will soon launch channel highlights, prioritized readings, and daily briefings, all of which provides things the company thinks you need to know based on what’s happening and how you use the service. Channel highlights does as intended, providing you a “while you were away” view on recent activity, while prioritized readings looks at activity across all channels. Lastly, daily briefings is described as your chief of staff so you can catch up at the beginning or end of day on what’s going on across teams.

The features Weiss previewed will be available in the coming weeks.

As for Enterprise Grid, Slack is making that available now and while an exact price hasn’t been disclosed, the company did say that it will be slightly higher than the Slack Plus plan. It’ll also support up to 500,000 users.