Trello, a web-based project management app launched seven years ago by Fog Creek Software and later acquired by Atlassian for $425 million, is a powerful collaboration tool. Its cross-platform dashboard is organized around the idea of boards, or digital whiteboards in a Kanban-style workflow populated by cards containing attachments, to-do items, hyperlinks, due dates, comments, and more. The platform is a highly visual drag-and-drop affair, with a robust ecosystem of third-party Chrome extensions and native apps called Power-Ups — not to mention integrations with services like BitBucket, Google Drive, Dropbox, Salesforce, Slack, and other apps via its API.

But while flexibility is arguably one of Trello’s greatest strengths, it’s become something of an Achilles’ heel in recent years. For example, it doesn’t take long for some tasks, like archiving old content and copying cards from one board to another, to become dreaded chores when you’re forced to perform them day in and day out. Ditto for tedium like sorting lists and maintaining a unified calendar.

That’s why Oscar Triscon, an entrepreneur and developer, launched Butler in 2016. Not unlike IFTTT, it’s a rules-based system that lets Trello users program routines and processes using natural language. And today it’s being acquired by Atlassian.

“When we look at productivity and the way people are working, they’re spending hours doing meaningless, repetitive tasks. [That’s given rise] to the popularity of tools like Siri Shortcuts and Zapier,” Michael Pryor, cofounder and CEO of Trello, told VentureBeat in an interview last week. “There’s a way to automate these tasks, and the tools to make these automations are now more accessible than ever.” 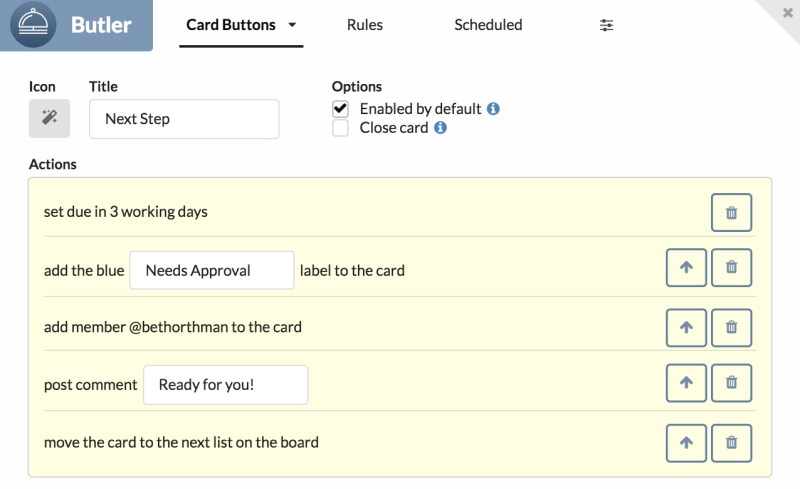 Butler, which is currently available as a Power-Up, will be integrated into Trello in the coming months. Some of its functionality will be made available to all users, but customers who subscribe to Trello’s premium tiers — the $10 per user per month Business Class plan and $20.83 per user per month Enterprise plan — will get “more advanced” capabilities and higher usage thresholds.

In a phone conversation last week, Triscon said he conceived of the idea for Butler almost three years ago, shortly after he started using Trello to organize his personal life and development at a software company. An early prototype garnered attention within the Trello community on Reddit, where Triscon said people reacted “super positively.”

“Trello is amazing for creating your own processes because it doesn’t bring you to a particular way of working, but [it lacks] native automation,” he said. “I could see that there was a lot of demand for [something like Butler].”

Butler has experienced meteoric growth in the intervening months. Today, it has “thousands” of customers and “tens of thousands” of active users, Triscon said.

To a degree, it’s benefiting from the momentum of a robotic process automation (RPA) market that flew past $6.6 billion in revenue last year. It’s not tough to see why — repetitive, monotonous tasks are an enormous time sink. Employees spend nearly a quarter of their time on repetitive chores, according to Smartsheet, and about 60 percent estimate they could save six or more hours a week if at least a few of those activities were handled by intelligent machines.

Above: Creating a command in Butler.

Butler is easy to get the hang of, but its simplicity belies its extensibility. It consists of two core components: ButlerBot, an autonomous account within Trello boards that performs tasks on a user’s behalf, and the aforementioned Power-Up app, which adds task-triggering buttons to the right-hand list of actions in Trello cards.

They’re both tuned from Butler’s command builder, a settings menu overflowing with customization options. Triggers set off operations when something occurs, like a due date. Actions, on the other hand, automate manual tasks like adding checklists, renaming cards, and moving items to a board column.

Butler completes most commands fairly quickly — Triscon said the internal target is around 30 seconds. Moreover, with the help of artificial intelligence (AI), Butler learns from the past three months of Trello board activity to automatically suggest candidates for automation.

ButlerBot rules can become quite sophisticated. For example, it’s possible to create one that pings relevant users and bounces a card to the bottom of a list if said card is missing specific requirements, like an attachment or a to-do list. The PowerUp buttons are no less powerful — in a demo, Triscon created one that moved a card to the top of a list and posted a comment — a task that’d normally take multiple clicks and a fair amount of typing.

Above: An automated task performed by Butler.

“Atlassian’s mission is to unleash the potential of every team,” Pryor said. “Butler takes the things that people do and automates them in a way that unleashes their potential.”

Trello’s acquisition of Butler comes a little over a month after workplace startup Coda — a kind of canvas that blends spreadsheets, presentations, apps, and documents in one — rolled out Automations, a feature that similarly enables users to program rules and perform actions. Unlike Butler, Automations works with third-party services like Slack and SMS.

And it comes as competition in the workflow productivity is heating up. In November, Airtable, an Excel-like extensible spreadsheet creator with a no-code drag-and-drop interface, secured $100 million at a valuation of $1.1 billion.

Butler has basic email and HTTP request functionality, but Pryor said that app integration is on the roadmap. He stressed that it’s only the first of many automation improvements heading to Trello, which as of September 2017 had more than 35 million users.

“Working more efficiently has become a necessary skill with the constant demands on time in the modern workplace … Since changing the number of hours in a day or weeks in a year is not an option, people have to figure out how to get more done in the same amount of time,” he wrote in a forthcoming blog post. “That’s where Trello comes in, and that’s why we’re investing in bringing the power of automation to the masses. Butler is Trello’s first step down this road, enabling every user to automate pieces of their Trello workflow to save time, stay organized, and get more done.”