Techniques that imbue textiles with touch sensitivity are something of a holy grail for the garment industry. Google perhaps came the closest with Jacquard, which it announced in May 2015 during its I/O developer conference. Jacquard leverages conductive fibers woven into fabrics plus small flexible computing components and feedback devices that work in tandem with software APIs and applications to recognize finger gestures and other signals.

But if you ask Mo Maghsoudnia, formerly vice president of tech and worldwide manufacturing at sensor chip startup InvenSense, projects like Jacquard have only scratched the surface of what’s possible. He’s the founder of UltraSense, a San Jose, California-based startup that emerged from stealth today. Its first products — a family of system-on-chips dubbed TouchPoint — use ultrasound sensors to sense movement and gestures through virtually any material of any thickness, including metal, glass, wood, and plastic.

“We have seen a shift in the way we interact with devices, where digital has replaced mechanical and the move to buttonless, touchless, and gestures is accelerating,” said Maghsoudnia. “The use of ultrasound in touch user interfaces has not been implemented in such a novel way until now.”

The first TouchPoint sensor to reach production is one of the smallest of its kind at 1.4 x 2.4 x 0.49 millimeters, or about the size of the nib of a fountain pen. It’s designed to squeeze into compact form factors like smartphones — indeed, UltraSense began sampling to manufacturers this month ahead of an anticipated 2020 market debut — and it’s robust enough to withstand perturbations like moisture, dirt, and oils, as well as lotions. Plus, it’s energy-efficient at a quoted power draw of less than 20ua in “always on” mode. 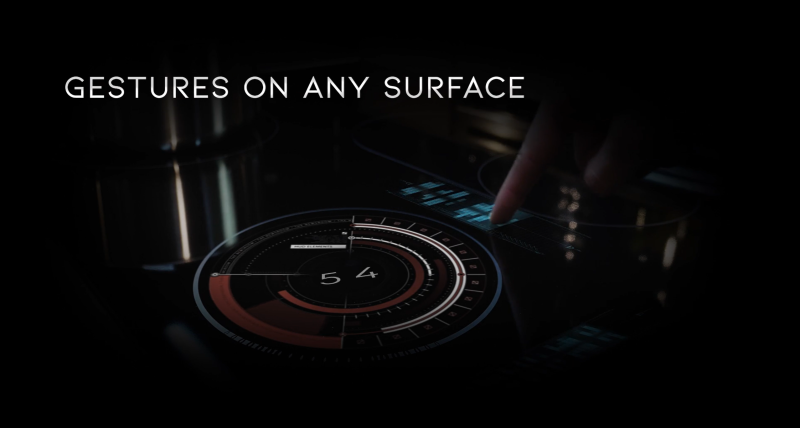 TouchPoint is designed to operate independently of a product’s host processor. Because the necessary algorithm processing is embedded in the sensor itself, it’s able to act as a standalone button (e.g., a power button or volume rocker) or a surface for taps, holds, and swipes. Maghsoudnia believes this could open the door to new design possibilities not only in smartphones, but in cars, internet of things devices, and home appliances. Imagine a smartwatch or a pair of earbuds with a highly precise touch interface, or a touch-sensitive and easy-to-clean vehicle door handle that unlocks with just a tap.

“We are enabling a range of new use cases that will allow OEMs to differentiate and bring consumers sleeker, waterproof devices, where touch and gestures can be customized for specific user experiences,” he said.

Ultrasonic tech isn’t particularly novel in the consumer device space, it’s worth pointing out. Evanston, Illinois-based Tanvas, formerly Tangible Haptics, is developing an ultrasonic platform that sends sound waves through screens to deliver feedback by modulating friction. Redux, which was snatched up by Google last January, pioneered a similar wave-based haptics solution for smart displays and tablets. As for startups Toposens and Sentons, their flagship products — which combine arrays of ultrasonic touch sensors with strain-gauge meters — directly compete with UltraSense’s TouchPoint and ostensibly detect touch with greater accuracy than touchscreens.

But Maghsoudnia believes the company has market momentum on its side. It’s currently working with five “top” phone manufacturers, who plan to test it for things like touch-sensitive power buttons and dedicated shutter keys, as well as one-handed selfie shortcuts. Next year, it will target industrial and medical market segments with the TouchPoint Z, a sensor that includes all of TouchPoint’s ultrasound, with the addition of three-dimensional Z-force sensing, providing gram-force measurement for applications that require gloves, external covers and cases, and water and ice rejection.