Dmitry Polischuk had an almost unnerving nonchalance about him as our sleek ride — a Toyota Prius V — bobbed in and out of traffic on its own. The steering wheel, as if guided by unseen forces, navigated the hatchback smoothly around the perimeter of the Hard Rock Casino in Las Vegas, where we’d met in the midst of the 2019 Consumer Electronics Show. Polischuk and I sat in the back; an engineer rode shotgun. The driver’s seat was up for grabs.

This was Yandex’s self-driving car — the one it’s been testing publicly in Russia since August 2018 as part of Europe’s first autonomous ride-hailing service. Its debut comes roughly a year after Yandex revealed its first prototype and kicked off pilot programs in Moscow, Innopolis, and Skolkovo, and less than a month after the Russian company announced that Israel’s Ministry of Transport had granted it permission to operate driverless cars on the country’s roads. To date, Yandex says its autonomous taxis have given over 2,000 rides.

I can count on one hand the number of autonomous cars I’ve let ferry me around, which include Coast Autonomous’ self-driving shuttle and a retrofitted Hyundai Ioniq. But even a newbie like me could sense that this experience would be a bit outside the norm.

Dispensing with a driver might be legal in Nevada, which requires only that someone be able to “take immediate control” in case something goes wrong, but it’s a relatively uncommon practice. (The ride-along engineer had control over the driverless car’s brakes, but not the steering wheel or accelerator.) Following an accident in May 2018, Uber’s driverless Volvo XC90s now have two test riders — one in the driver’s seat — who switch off every couple of hours. And despite Waymo’s promises of a fully autonomous taxi service by the end of 2018, the cars in its Waymo One fleet retain a driver who watchfully monitors their progress. 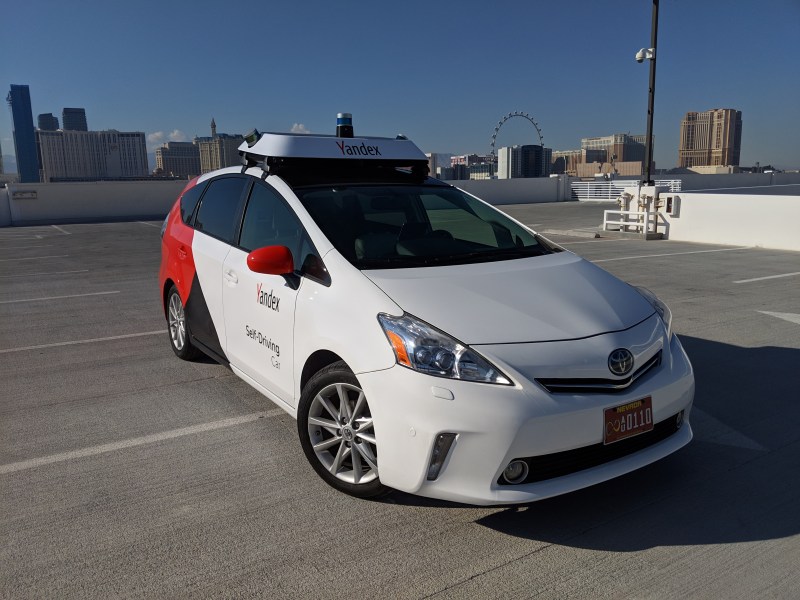 It’s not that Yandex isn’t cognizant of the risk involved. Rather, the company’s prepping for a future when the only people sitting inside its driverless taxis’ cabins are customers — and when the only employees keeping tabs on rides do so remotely, over a cellular connection, with banks of controllers, lightweight PCs, and monitors. To that end, the teleoperators overseeing Yandex’s driverless cars in Russia will eventually manage a “few tens of cars,” Polischuk says, using a system designed in-house.

Achieving that level of autonomy doesn’t happen overnight. Work on Yandex’s platform began in earnest in 2016, when the company’s 120-person self-driving team started piecing together the underlying hardware. What emerged is mostly custom, from the sizeable PC under the floor of the trunk to the vision sensors mounted to the roof. (A prefab like Nvidia’s Drive or Mobileye’s EyeQ was decided against early on, Polischuk said, in order to afford the dev team greater flexibility in design.)

The PC’s blinking mainboard consists of a mix of graphics processing units (GPU) and central processing units (CPU), while the stack comprises three Velodyne lidars (sensors that measure the distance to target objects by illuminating them with laser light and measuring the reflected pulses), five cameras, eight radars, and GPS. The software’s bespoke, too — both the framework and the proprietary bits behind the cars’ decision-making capabilities.

The car Polischuk and I climbed aboard — a used model — was retrofitted by a two-person team over the course of “two to three weeks.” Mapping and testing took an additional two to three weeks, the bulk of which was spent annotating lanes, traffic lights, street signs, lamp posts, crosswalks, and other stationary objects.

Currently, a small team within Yandex handcrafts maps of areas ahead of deployments, but Polischuk expects the process will become more or less automatic in the future. As the cars’ suite of sensors sweeps up position data and beams it to remote servers, it’s reconciled with existing data, enhancing the maps’ resolution. 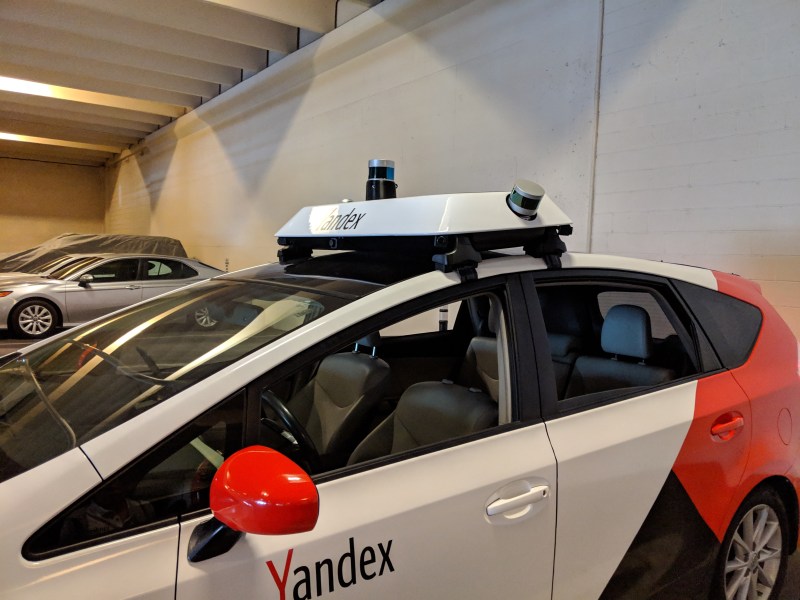 “You can essentially localize the technology while you test it, assuming certain conditions,” Polischuk said. “Highway autopilots, the way they drive, they just use cameras and radars — they don’t have very detailed maps that come from current navigation systems. [For driverless cars,] you need to drive public roads with a safety person to collect all those cases so you can really confirm that, yes, the system is safe and reliable. You need this data.”

That much was clear in Vegas. As we traversed the 4.3-mile loop at speeds of up to 40 miles per hour, changing lanes and occasionally slowing to make way for the more aggressive human drivers around us, two iPad Pros — one on the dashboard and another in the back seat — illustrated the car’s predictions. The onboard computer turned scans from the roof-mounted lidars and cameras into an animated, three-dimensional cloud of white points. Yellow boxes highlighted pedestrians, cars, bikes, traffic, and other objects of interest, while rectangles indicated the direction and lane the car — and surrounding cars — would take next.

Maintaining that sort of transparency will be key as Yandex moves toward widespread deployment. Currently, most drivers are wary of autonomous vehicles, with three separate studies last summer — by the Brookings Institution, think tank HNTB, and the Advocates for Highway and Auto Safety (AHAS) — finding that a majority aren’t convinced of their safety. More than 60 percent said they were “not inclined” to ride in self-driving cars, almost 70 percent expressed “concerns” about sharing the road with them, and 59 percent expected that self-driving cars will be “no safer” than human-controlled cars. 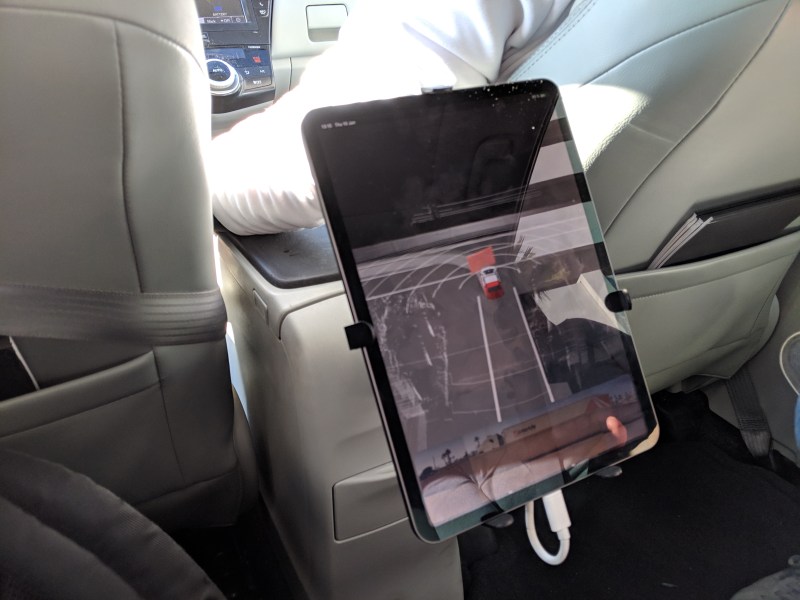 Unprotected left turns became a problem early on, as it turns out, because in Russia, a traffic signal with a blinking yellow light indicates it’s out of service, whereas in the U.S., it’s a yield sign. To account for the discrepancy, Yandex’s engineers added an extra bit of rules-based logic that chooses the appropriate set of algorithms to handle the turn.

With that challenge solved, the team moved on to more granular stuff, like vehicle behavior. They sought to achieve a balance between defensiveness and assertiveness — at its most aggressive setting, the car waits until the absolute last minute to make lane changes.

“The ride was smooth, right? But trust me, there were so many false detections that are filtered out by the systems,” Polischuk said. “It’s all probabilities and the fusion of different sensors and confirmation. You have a lot of noise from [stationary] things.”

As the demo came to an accident-free conclusion without so much as a violent tap on the breaks, I asked Polischuk about the future of Yandex’s driverless platform. In the near-term, he said, the goal is to expand ride-hailing service to Kazan and Moscow when the company receives regulatory approval, which could be within “months.” Within four years, Yandex plans to build a car without a steering wheel that’s capable of “human-level” driving in certain cities. 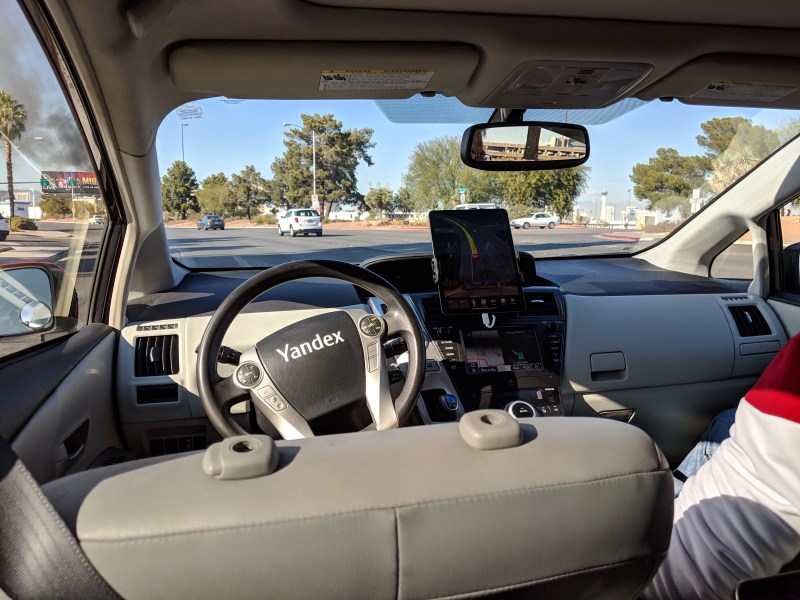 By then, the autonomous car market will have climbed from a projected $54.33 billion in 2019 to $556.67 billion by 2026, according to Allied Market Research, propelled by verticals such as food delivery and ride-hailing. Yandex is clearly aiming to get in on the ground floor.

“Our assumption is that the tech will be ready in three to four years — in certain areas that are mapped, we’ll be able to drive not worse than the driver,” Polischuk said.

Yandex has competition in Daimler, which in June obtained a permit from the Chinese government allowing it to test self-driving cars powered by Baidu’s Apollo platform on public roads in Beijing. Another competitor is Baidu, which launched self-driving shuttle buses in more than 10 regions across China earlier this year. And they’re just the tip of the iceberg — startup Optimus Ride last year announced it would build out a level 4 vehicle fleet in the greater Boston area, following news of driverless car company Drive.ai‘s expansion into Arlington and Frisco, Texas. Waymo, which has racked up more than 10 million real-world miles in over 25 cities across the U.S. and roughly 7 billion simulated miles, in November 2018 became the first company to obtain a driverless car testing permit from the California Department of Motor Vehicles (DMV).

Yandex has an advantage in that it’s conducting the bulk of its data testing in Russia, Polischuk contends, where the drivers tend to be “pushier” and the winters snowier and icier. And Yandex has a leg up when it comes to data, he claims — its search engine and mapping service are the largest in Russia.

“[Most companies] underestimate the complexity of the problem. They don’t have the experience with the IT stuff,” he said.

History hasn’t rewarded overconfidence in the pursuit of driverless car platforms. But if my demo taught me anything, it’s that Yandex has the foundation in place to achieve its ambitious goals. It just needs time — and willing passengers.