Facebook CEO Mark Zuckerberg today announced that Internet.org is now available to more than 1 billion people around the world. The milestone was reached when Internet.org launched in Malawi, where TNM and Airtel users now have access to free basic Internet services.

Facebook unveiled Internet.org back in August 2013. Partners include Samsung, Ericsson, MediaTek, Microsoft, Opera Software, Reliance, and Qualcomm. The goal, according to Zuckerberg, is “to connect the next 5 billion” people who don’t have access to the Internet (Facebook already connects over 1 billion users via its social network). 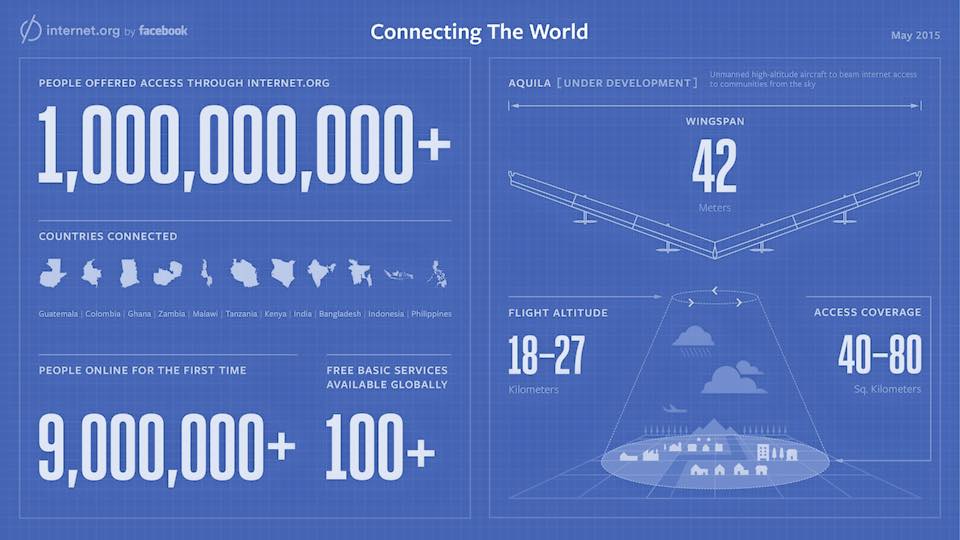 Aquila, the solar-powered plane also included in the image Zuckerberg shared today, is still under development. Facebook is supposed to test the Internet drone, which has a 42-meter wingspan (greater than a Boeing 737), sometime this summer.

It’s important to emphasize that today’s milestone does not mean Internet.org is already connecting 1 billion people — they are now simply being “offered access.” The same goes for Aquila’s 40-80 square kilometer access coverage: People in those areas will be offered basic Internet, but they still have to choose to get online.

Nonetheless, availability for 1 billion people is an impressive milestone to achieve in just under two years. The actual number of people who have signed up to get online for the first time is 9 million, though it’s not clear how many people who already were online are now using Internet.org. The 1 billion figure likely comes from adding up the customer bases of carriers that Internet.org has partnered with in Guatemala, Colombia, Ghana, Zambia, Malawi, Tanzania, Kenya, India, Bangladesh, Indonesia, and the Philippines

Given its population, India is likely the biggest contributor; Internet.org launched there in February, but faced a lot of criticism related to net neutrality. Earlier this month, Facebook responded by launching Internet.org as a platform for developers.

Turning Internet.org into a platform means apps and services can be built on top of it. Still, that doesn’t make it as open as the wider Internet: Websites that wish to integrate will have to follow guidelines so they are lightweight and data-efficient.

In related news, Facebook yesterday hired former FCC chairman Kevin Martin to manage policy on its mobile and global access efforts. Martin will be key in helping Internet.org as it brings more and more people online.