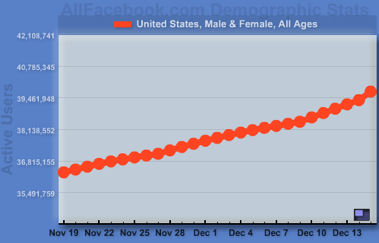 This summer, Facebook predicted it would hit 200 million monthly active users by the end of this year — a number some scoffed at, as Facebook had less than 100 million at the time. Today, it looks like Facebook will likely miss its lofty target, according to its current growth rate. But this isn’t a new opportunity for Facebook doomsayers to start gloating.

Because Facebook is currently adding between 600,000 and 700,000 users per day, it is more likely to hit the 200 million mark in March, InsideFacebook predicts — up from 140 million this month. And that’s not all. Below, I’ve compared Facebook’s internal stats currently available from the company, versus those published in January. Basically, as the site has grown larger, a wide range of site metrics have been looking better and better. In January, for example Facebook was only (if “only” is the word) adding 300,000 users per day.

Of course, the big question is how Facebook will make money off of all these users. The metrics are starting to point in that direction, too. The company has been experimenting with a variety of ways for users to share information about advertisers on the site. For example, an advertiser can set up a “Page” about a product, then users can become fans. When a user becomes a fan, the users friends see a message about that action in their news feeds. Now, more than 2.5 million users are joining pages each day. 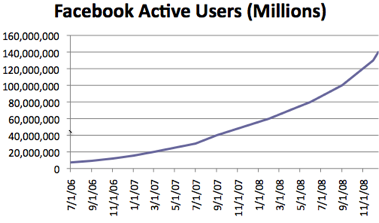 Facebook’s redesign, implemented this fall, refocused the site around news feeds and profile feeds to help promote user activity, including ad-focused actions like joining an advertisers page. Obviously, the redesign didn’t hurt the site’s growth — even though millions of users were angry about it at first. Instead, the combination of more users and more sharing means Facebook will continue to make more money on advertising.

The problem is that advertisers are cutting back ad spending everywhere. Third party marketing analyst firms like eMarketer believe that “experimental” forms of advertising, like advertiser Pages, will be cut. Also not good for Facebook: 70 percent of it’s growth is happening outside the U.S., much of it in countries that aren’t valuable advertising markets. Yet, Facebook is also growing within the U.S. AllFacebook’s analysis of the site shows its active U.S. users quickly climbing to above 40 million.

If Facebook keeps growing, advertisers won’t have any choice but to “experiment” with Facebook if they want to reach web users. Growth is also why Facebook continues to attract third-party developers, despite the changes it regularly makes to its platform.