Amid all the hype about chatbots and talk of a tech bubble, more and more companies have started building bots that are meant for business use.

But what about people who are looking for work?  Countering fears that bots are replacing humans in the workforce, a few young startups have come up with bots to help you find available positions, chat with hiring managers, or even create your next job.

Earlier this year, Esther Crawford lost her job when the startup she was working for ran out of money.

Instead of looking for a new job, Crawford built a resume bot, a chatbot that speaks to hiring managers on her behalf. With little experience and a template from the Smooch bot platform, she launched EstherBot in April — her process is documented in this popular Medium post.

Since then, EstherBot has landed Crawford eight interviews and three job offers and been copied dozens of times.

Instead of accepting any of the job offers that came her way, Crawford is creating a startup to help people make their own resume bots. Last week, Crawford was accepted into Botcamp, a 10-week startup accelerator at Betaworks in New York.

A chat with EstherBot does not simply entail a chronological listing of Crawford’s past work experience. The bot begins by giving you a choice between learning about Crawford’s professional background, finding out how to create your own resume bot, or discovering random facts about Crawford. A few random facts into the chat, and you know she is coordinator of a Burning Man camp, has hitchhiked through Syria, volunteered in an Iraqi refugee camp, and was an early YouTube success.

“I think it just gives personality. It just lets you know things that are important to me and kind of like who I am, which you otherwise would never get. Even if you’re looking at my Twitter feed, you might see funny cat GIFs or articles — it’s a glimpse, but this gives you a fuller picture of who I am,” Crawford explained.

Chatting with EstherBot, you can also choose to learn about Crawford’s education, childhood, and work experience. Work is broken down into three categories: big brands, startups, and the work she does now. 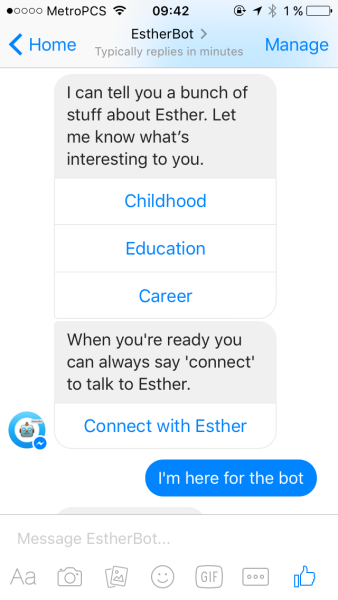 You can also turn off the bot and speak directly with the real Esther Crawford.

“Having that one-to-one communication channel in messaging turned out to be a really powerful way for recruiters to be able to ask me cultural kinds of questions, what inspires me and what I’m passionate about,” she said.

Crawford came to realize that her bot’s chats with hiring managers needed to conform to time restraints, which is one of several iterations made since its creation. EstherBot originally offered an unscripted, text-only conversation, but it is now scripted, with the use of interactive buttons in chat. (Unscripted messaging lets a person ask any question, whereas scripted messaging only gives a few specific options.) An unscripted experience that doesn’t take the user’s questions into consideration can end up frustrating and annoying the other party and risked alienating hiring managers.

“The structured messages, they were a game-changer. When people had to type in keywords, there were typos; people went off script really quickly,” she said. The change from unscripted to scripted conversation increased the back-and-forth interaction average on EstherBot from eight messages to 20 messages.

Future resume bots may give users the option to filter conversations based on things like the company a hiring manager or recruiter works for, salary, or location.

“I don’t think of a resume bot as superseding or completely replacing a resume. I think of it as a more complete version of a resume,” she said.

Yodas helps skilled workers find their next job. The bot currently operates in closed beta with roughly 1,000 software engineer users. Its focus is on the casual job seeker, people who perhaps have jobs but want to weigh their options. Yodas asks a series of questions and then brings back jobs listings, along with talent rankings, open-source history, and publicly available funding information.

“We see an under-served market for job seekers whose intent is not that high,” said Yodas CEO Nir Dremer.

Yodas works exclusively with software engineers at this time but wants to offer its service to skilled workers in other industries in future.

Dremer envisions Yodas becoming a trusted advisor, one capable of telling a user whether they should keep their current job or consider an opportunity elsewhere, with recommendations based on the company culture, job security, or salary they desire.

“Athletes have agents, but engineers and knowledge workers do not,” Dremer said.

Yodas is testing a feature now that will allow anonymous chat between a company insider and a person interested in a job at that company.

EstherBot and Yodas help you get jobs. TARA helps create those jobs and enables startups to grow.

TARA (Talent Acquisition and Recruiting Automation), automates hiring contractors and project management. Since TARA’s creation last year, 45 developers have been hired to complete 60 projects for 50 companies. TARA has facilitated the creation of websites, virtual reality apps, logos, and even the name of one company. The work TARA can do today is primarily related to software.

Nearly half of the companies that used TARA were early-stage companies in places like San Francisco, New York, Dubai, and London, she said. 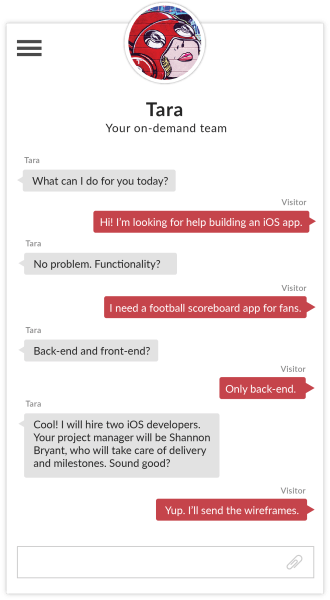 Masood is adamant that TARA is not a chatbot company, but rather a machine learning company that uses a chat user interface.

“You can’t build an entire company that’s only a bot. You need to have a product or service of value to provide for customers, and I think that’s what people are forgetting,” she said.

As part of quality assurance, a pre-screening algorithm analyzes applicants’ GitHub activity to assess the complexity of code and languages used, along with other factors to determine a software engineer’s skill level.

The bot personal assistant will be able to give project updates in future, but today roughly 40 percent of clients request to speak to a human project manager before completing a transaction, Masood said.

In the future, TARA wants to apply its automated project approach to tackling large projects for governments or other industries.

Formerly known as Gradberry, TARA was created by Masood and cofounder Syed Ahmed, both graduates of the 2015 Y Combinator startup accelerator.

Masood said the company is making a profit and has recently closed a seed round but declined to reveal the amount of money raised.